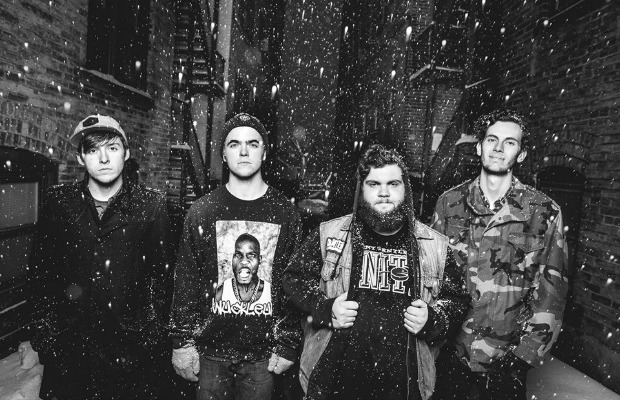 2015 is guaranteed to be Head North’s most successful year to date. The emotional rock band just released a new EP on Bad Timing Records and are currently in the midst of a full US tour with fellow genre breakouts, Have Mercy. idobi senior writer Catherine Yi sat down with vocalist Brent Martone at the Los Angeles stop to discuss their DIY roots, writing sad songs, and the best thing to order at In-N-Out Burger.

Your EP Bloodlines just dropped a few days ago. How does it feel to have new music out?

Awesome. It’s been like eight months since we put the split out, so it feels good.

With this album cycle especially, you guys are currently in this position where you’re moving away from local band status towards being more of an established act. How is that process?

It’s pretty cool. Going into it, we never really expected it to happen like that. We just wanted to play music. Right out of high school we started taking things a little bit more seriously. We learned a lot about being in a band by going on the road and failing at a lot of things. It feels cool to finally be on a tour like this with Have Mercy, Weatherbox, and You, Me, and Everyone We Know. We couldn’t ask for anything better.

I love your lyrics, especially on “The Planet”— it sounds like it could be a really cool movie. I was wondering where you find inspiration for your songwriting?

Lots of different places. I just like telling stories with the songs. “The Planet”, specifically, is based on things from my life, but also based on a story called Josephine the Singer, or the Mouse Folk, by Kafka.

Do you ever feel bogged down by mostly writing just sad songs?

That needs to change. That was supposed to be a two day thing and then we just got too lazy or drunk to change the name. I think that this new EP has some of the same sad themes but the goal was to be a little uplifting. But yeah, when you write a shit load of sad songs over and over and over, it gets a bit depressing [laughs].

So your next album will just be all happy songs.

You’ll be @HappyNorth for the next two years.

[Laughs] We’re going to change the Twitter handle back at some point.

You guys are about halfway through the tour now. I know a lot of people are very excited you and Have Mercy still made it out after the cancelled Front Porch Step tour. How has the tour been going?

Yeah, we made the best of a bad situation. I’m just happy to be on the road, especially with legitimately three of my favorite bands of all time that influenced us so heavily. We’re just super lucky to be on this tour and the shows have been fucking awesome. I mean, we used to play basements and now we’re playing real shows.

How does this tour compare to your first time coming out here last year?

Last time, it was a DIY tour. We played 125 shows and I booked all of them, but I don’t know how to book shows so they were awful. On that full US tour our van broke into a million different pieces. We lost all of our money trying to fix that and then we had to finish the tour. It was a fucking nightmare. L.A. was actually a pretty good show last time, though.

Would you go on a tour like that again?

Yeah I would. It’s awesome to see a progression on the shows you play, but I legitimately just really like playing music and it doesn’t matter. But it is nice not to worry so much about how I’m gonna eat and shit like that.

Do you guys have a new van?

No [Laughs]. We got it fixed up and we’re just praying that it doesn’t break down, but the AC and so many other things on it are busted. We’re hoping we get a new one before our summer tours that are coming up.

So now that you’re in L.A. again, I have a very important question for you. Do you think In-N-Out is worth the hype?

Well, I just got back from my second meal at In-N-Out today so I would say yes. I don’t think I’ve eaten anything except In-N-Out since we’ve been in California. I’m all about it. I’m a believer—I worship.

I think In-N-Out is just all right.

It’s fucking awesome! Are you kidding me?

The animal fries are dope, but that’s about it.

Ask for them well done and then they don’t get all soggy.

Okay, I’ll try that. Animal-style fries well done… I can do that.

What can we look forward to after this tour?

A lot of shows. I can’t really say too much. I know that so far we’re doing Bled Fest, Skate & Surf, and a college show in New Jersey with Title Fight, The Menzingers, and Four Year Strong.