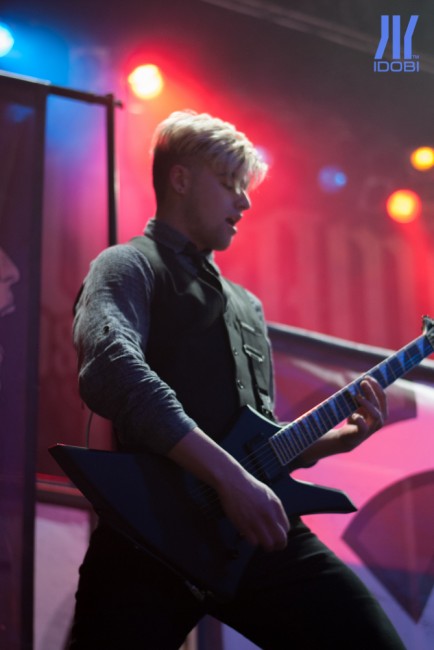 Crown The Empire have come a long way in a short time. Touring with acts like Pierce The Veil, Motionless In White, and Like Moths To Flames, it’s no surprise the young band from Dallas has risen through the ranks. idobi writer Alex Rudisill was able to catch up with guitarist and founding member Benn Suede at the Philadelphia date of their current tour on the inner workings of the band and what lies ahead.

Tell us a little bit about the tour you’re on right now.

We’re on the Break Down The Walls tour with Asking Alexandria, August Burns Red, We Came As Romans, and Born of Osiris. It’s been incredible so far. We played a sold-out show in New York City at the Best Buy Theatre the other day and it was amazing. Huge crowds, awesome fans, great bands.

You guys announced that you finished recording your next album. When can we expect it to be released?

I can’t say exactly, but sometime this summer.

While writing, what band member gets the ball rolling on the idea for a song?

We have a ghost member named Brendan Barone, who was originally in the band. He decided he didn’t want to tour, but he still works with us a lot. Him and I do most of the writing, and we did the same on this record. Everybody has an input and does their thing, but it’s him and I that take the reigns.

Social media seems to be a very important aspect of helping a band grow in popularity these days. How have you guys used social media to your advantage?

Our band was born because of social media. When I started the band, it was a huge deal that we promoted ourselves. A lot of how people even come across a band these days is because of the Internet. Our other guitarist, Brandon [Hoover], does most of that stuff. Day and night, he’s always talking to fans, posting stuff, making sure everything is on time, and keeping up with all the pages. The whole band is like that too, keeping up with our Instagrams and such. It’s kind of cheesy, but it’s the way bands are marketed now. Radio and TV aren’t as important now, I think.

At South By So What?!, you guys taught a BandHappy class on how to positively utilize social media. What were some pointers you gave out?

It was an hour long class, so we covered a lot. A lot of it was that you have to be original. Finding out whatever your niche is and using it to your advantage is the biggest thing. Talking to fans and creating a personal relationship with them is something we’ve been about since the beginning. We understand that the reason we’re here is because of them. Making sure that relationship stays the way that it is when it gets started is really important to us, so we made sure the class knew that as well.

How much are you guys looking forward to playing Warped Tour again this year?

So excited. Warped Tour was a dream of all ours before we played it last year. It went incredibly, so much fun. This year, we’re playing the Monster Stage. Last year, we had some crowds where kids in the back couldn’t even hear us play. This year, it’ll be fun to be able to play for the whole crowd.

What bands are you looking forward to watching?

So many good ones! I’m really stoked that The Devil Wears Prada is on it.

Having two vocalists seems to be a popular trend in bands these days. What made you guys decide that two singers worked best for you and how does it add a new layer to your music?

Originally, Andrew sang and screamed everything on the original EP that we did. He didn’t feel like he could do both of those things to the best of his ability for a whole set. That’s a lot of vocals for a long time. We decide to add somebody on and Dave is absolutely incredible. He has a real unique scream, is so talented, and such a great live vocalist – same with Andrew. They can play on each other live and talk back and forth, which I think adds a cool dynamic.

You’re still a very young band. Do you still feel like you have to prove yourselves to some of these bands that have been around for over a decade?

Guys like We Came As Romans and August Burns Red have been grinding hard for a long time and are both incredible bands that we all grew up listening to. We’re really new, only about three years old, and we’re very fortunate to be where we’re at. We always try to show respect to the people who have been doing it for a lot longer and have been successful.

What can we expect from Crown The Empire in 2014?

We’re playing some festivals in the UK pretty soon, then we have Warped Tour. I’m just so excited to get the album out there this summer for everybody to hear.