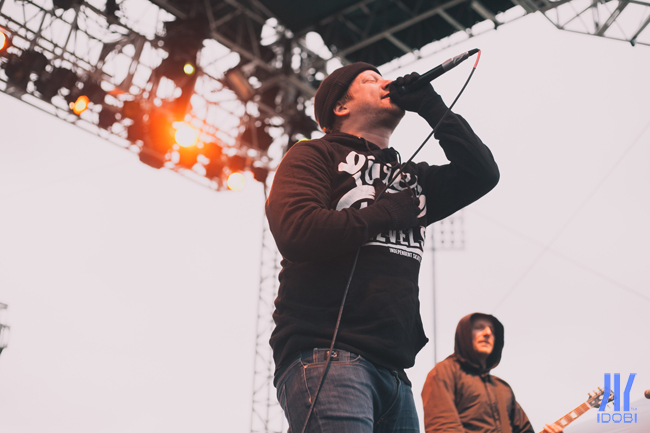 Canada’s most formidable hardcore band, Comeback Kid, have been around the block quite a few times. The band is taking over 2014 with the newly released  Die Knowing  and a whole mess of touring planned for the rest of the year. idobi writer Alex Rudisill sat down with vocalist Andrew Neufeld to discuss the band’s roots, the next generation, and traveling the world.

How is your current tour going?

Tour is going pretty good. We’re out with Backtrack, Xibalba, Downpresser, and To The Wind. We just put out a new record so the morale is up. We’re excited to have some new songs to play and new tours to do.

A lot of younger bands and fans consider you guys to be one of their first hardcore bands. What bands were like that for you?

For hardcore, Madball has gotta be the most obvious because they’re just so awesome in so many ways. Sick of It All is a band that I’ve always admired, just the way they carry themselves and the way that they’re able to play with punk rock and hardcore bands. People in the band just give off a really awesome vibe; I really admire that. Bands like that are what Comeback Kid aspire to be and, given some longevity, maybe we could be a classic band like that one day.

How do you feel about hardcore getting more popular due to it permeating more mainstream music?

I think I’ve seen waves of that happen. Hardcore has always kind of influenced the mainstream because it’s always been the dangerous music. Do your research and a lot of really awesome musicians who’ve gone crazy places come from hardcore, from Rage Against The Machine to Moby even. I think that’s something hardcore bands should be proud of, but it’s cool if those bands can get attention. It can get a little messy when people don’t really know what hardcore is, when certain bands advertise themselves as that when they really aren’t.

Do you think hardcore is threatened by this?

I guess just the name is. Those who know, know.

Are there any younger, up-and-coming bands that you’re really excited about?

Backtrack’s new record is the best record they’ve done. I’m really excited to see that band keep on doing it; they’re all really in the right place. I just saw this band play for the first time today called The Greenery, and they’re gonna be out on a couple tours of ours. A friend of mine showed me them. They have a cool fun hardcore, punk rock vibe. I’m stoked to see them play more.

I live in Toronto now, but I’m from Winnipeg, which is a smaller city in Canada. When I started going to shows, it was hardcore bands playing with skinhead bands, street punk, sometimes metal bands – all different kinds of bands with different kinds of people. It was such a small city that couldn’t really afford to have all the sub-scenes. There’d be punks, hardcore kids, and metalheads all at the same shows. It was a little bit before the internet. It’s just another city now. We’ve been able to see a lot of scenes grow with the times, going to cities where hardcore used to not be a thing and now it’s a huge thing.

What are some of your favorite cities to play?

I love Lisbon in Portugal and anywhere in Brazil. I like the far off places, like Malaysia and Bangkok. Melbourne and Los Angeles are always fun too.

You guys recently played South Africa. How was playing down there?

It was one of those places where fans are starting to emerge. There’s been a scene there for quite a while, but now more international bands are just starting to go there. I’m sure there’s only been a few hardcore bands who’ve gone down there. We tried to go before and we’re actually able to go this time. The shows are cool, about the same size as a normal club here, but you can just tell that the people were so excited for us to be there. It was like growing up in Winnipeg where we’d have to drive to Minneapolis to see shows. Now a place like that can be a gateway when bands go from Europe to Asia; it can be another stop.

What do you think of these mixed tour packages with metal and hardcore bands?

I think it’s cool. We’ve always tried to that since we’ve been a band because we’ve never really fit into any scene. It gets the bands out to different people.

What are the band’s plans for the rest of the year?

Just pushing this record. We’re doing a bunch of headlining touring. We’re almost done this US tour and we go to Europe in a couple weeks. Then Canada, festivals, Europe, and then some more overseas stuff at the end of the year. When you put a record out, you just wanna play.

This new record is a little heavier than the last one. What were some of your inspirations while writing?

We come from a heavier hardcore background. Before Comeback Kid, we were all playing in heavier bands and we’ve always been into that. We did our last record four years ago and I was listening to more punk rock stuff then. So that record came out a little more punk, while this one turned out a little more ’90s metallic hardcore sounding. We just wanted to have fun with it. We had some more melodic songs, but we didn’t realize how heavy of a direction it was going to be. We had all these songs that were really heavy for a Comeback Kid style record. We put those toward the front and put all the punk rock stuff at the end to leave it on a brighter note.