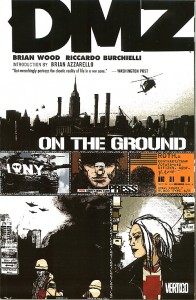 Miguel Tenicela spoke with Brian Wood and some of the illustrators he has collaborated with at the 2009 New York Comic Convention.

How did you first get the idea to start writing comic books and graphic novels?
In college, when I first started reading them, which was when I was about 25 years old. I was in art school, and I decided I wanted to draw comics… I hadn’t yet thought of myself as a writer. That came later, when I realized I didn’t know anyone I wanted to work with, or that I trusted to write my ideas, so I just started writing for myself.

When reading most of your comics, I noticed they all seem to be mainly based in New York City where you live. Besides the settings do you base any of your characters or anything else in your comics off of yourself or experiences you’ve had?
I think every character I’ve written is pulled from people I know, at least in part. How else do you come up with them? That’s not to say that everything I do is based off people in a strict sense, just that I use people I know as a starting point.

Do you develop stories for your characters or characters for your stories?
Characters for the stories, absolutely. The first thing I think about when starting something new is “what’s the point I’m trying to make? What am I communicating?” Story comes next, and then characters.

Do you have any writing “rituals” such as favorite places to write etc?
I can really only write at my desk, in my home, keeping very much to patterns and rituals. Sometimes I can write in hotel rooms, but never any place public like a cafÃ© or library. Oh, and a lot of my preliminary writing, which is done longhand in notebooks, like outlines and research notes, I do in bed just before going to sleep.

When writing your comics do you have a planned ending for your stories or do you write the story as you go along with it?
That really depends on a great number of things. Generally I at least know how things are ending in the short term, like a monthly installment of an ongoing series. I’ll know how that installment ends but I might not know, ultimately, how the series will end.
There have been times when I have felt stuck and I’ll just keep writing my characters talking, extending out a scene or conversation, to see what ideas develop naturally. But that’s more of an exercise, since I usually have to edit all that down pretty severely.

You have worked with some amazing illustrators. How do you choose who you are going to collaborate with on different projects?
It’s either usually people I already know, or people who’s portfolios I see online or in my editor’s office. I always chose myself; I’m always the guy with the last word, which is nice. I’ve also had incredible luck with people… every single artist I’ve worked with is someone I would happily partner with again.

What were some of your favorite comics growing up and who are your comic influences?
You know, I really don’t have any. I didn’t read comics as a kid, and I do most of my personal reading outside of comics. But I do admire a lot of my peers, like Jason Aaron and Brian Azzarello, but I find I am more inspired just by them, by seeing how prolific and creative they are, then by the actual work (which is fantastic work, don’t get me wrong).

You used to work in the video game industry, are you a gamer yourself? If so what are some of the games you are currently playing?
I have to be extremely careful about playing games. I always have deadlines, literally, always. I shouldn’t really ever be taking a day off. So when I do play I have to be very strict with myself. Right now I am playing SKATE 2, about 10-15 mins a day, on days I do play it.

In DMZ you have switched from an action based storyline to a more political one and it isn’t hard to feel as if DMZ might be drawing to an end. Will we see the end of DMZ in the near future or are we in store for something unexpected?
I always felt it was political… some stories more than others, I suppose, but I haven’t change the vibe of the story at all. And yeah, it is drawing to an end, probably within 20-30 issues. Which seems like a lot, but we’re already past the halfway point and I am starting to lay down story elements now in preparation.
DMZ will end, absolutely. I always figured I would wrap it up by around issue 60 or 70. Better to end it on the early than too late.

Sometimes it feels like the developments in DMZ end up surfacing in future real-world events, besides echoing present-day happenings. It’s obvious you have a good feel of where the nation seems to be headed. How much of DMZ’s setting is pure fiction and how much of it is your prediction for the future?
I really make an effort never to get into the business of predicting anything. DMZ is a book about the worst case scenario. I have the book, this world I have created that is similar to our own world and I imagine what would happen if the worst thing possible happened. I take cues from current events and from recent history. If anything ever happens to “come true”, I am not so sure I should be happy about that, since it means the world is just getting that much worse!

Most of your work is based ether in New York City or at least in a modern age how was it writing Northlanders which is something different from everything you wrote? Did you have to study and learn about the new era you were writing in?
I did a couple years of research, and still read about one book every two weeks related to Vikings. But compared to the DMZ research I do, it’s a lot more fun and free-feeling, since even though I am constrained in a lot of ways by history, I don’t have to be SO accurate like with LOCAL or DMZ or my other books set in today’s world in recognizable locales. That’s harder than you think. You can never cut corner or fudge anything.

Are there any other projects you are currently working on that you’d like people to know about? Or any projects you are considering in the near future?
I have about four ideas in the idea file for whenever it is I am ready to start something new. But I have at least two more years of DMZ and probably three of NORTHLANDERS, and those keep me pretty busy.

For more on Vertigo comics visit them here