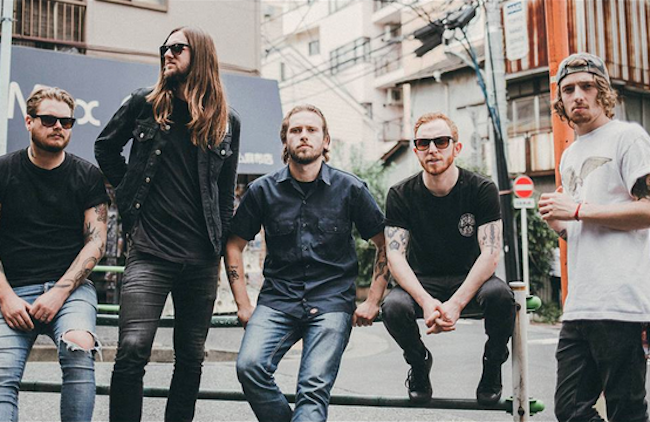 It’s been a while since we’ve heard from British metalcore band While She Sleeps, but that doesn’t mean they haven’t been busy. Though it’s been a tough three years since the band’s debut studio album, This Is The Six, the five-piece outfit, despite a physical setback that ultimately turned out to be a blessing in disguise, recently dropped their latest full-length album, Brainwashed, to positive reviews. idobi Radio had the opportunity to catch up with bassist Aaran McKenzie to talk about the new record and the band’s upcoming run on the tour they’re looking forward to most—Vans Warped Tour—as they prepare to head stateside this summer.

First, let’s start with where you guys are now and what you’re currently up to at this exact moment.

This exact moment? We’re on a train down to London for our visa appointments for the states this year. It’s quite boring to be honest (laughs).

You just announced signing with Razor & Tie back in April. How has the reception been so far?

It’s been great. We are very honored to join the Razor and Tie family. They have been very welcoming so far and are spreading the word of Sleeps across the pond!

Your latest record, Brainwashed, just dropped in April. It’s been three years since the band released its debut album. How was the recording process this time around? What were the major differences? Similarities? Inspirations?

We decided to go for a similar work ethic with this album as we did with The North Stands For Nothing (our debut mini album) and moved in together for the writing process. It culminated in a very live raw vibe for most parts of the album, which is what we wanted to achieve.

How have your fans have reacted to the new record?â€¨

The fans have responded amazingly to the new material and have really got on board with it. We haven’t really changed our sound too drastically from our debut full-length so I think it was an easy transition for the fans to make. All in all they have stood by our side honorably.

Being from the UK, do fans there respond differently to your music than those in the US?

I think our music can appeal to a diverse range of people but at the same time those people have a similar set of values at their core, which can make the typical Sleeps fan quite indistinguishable. Not to mention they are all absolutely nuts at our live shows no matter where we go.

You’ve been a band for nearly a decade now, and Brainwashed is your second release (aside from the mini-album). Some bands seem to spit out records every year or every other year. How important is the element of time when it comes to writing and releasing an album?

We spent a considerable amount of time playing locally and growing as musicians. We started this band when we were 15 and 16, so we spent a lot of that time really maturing with our music. But, it is absolutely 100% important to pour everything we have into every one of our releases and that can’t be done with releasing an album once every two years with most of the writing being done on the road.

Some shows were cancelled last year due to Taylor’s vocal injury. Did this delay the album recording process as well? What is his status now? We hope his surgery and recovery process went well and that he’s back to 100%.

He is back to 100% now. It put our album back one whole year but it did really help with the writing for the album, as it gave us a lot more time to work on it. So it was quite a blessing in disguise really.

You’ll be out on the Vans Warped Tour this year. What can long-time fans and new fans expect?

They can expect us to be ready and raring to go. We have a raging fire burning deep down in all of us right now. From all the time we had off, our last headline tour didn’t even scratch the surface with curing the itch. We will be in absolute form and we can’t wait!

And this isn’t your first summer on Warped Tour. Do you have any particular memory that stands out? I’m sure there are quite a few stories to be told.

Yes, this will be our second year on Warped Tour. It is a long summer, and days tend to merge into one another a lot of the time. I can tell you a tale of this one time though, after the after show BBQ somewhere in Florida, the heavens opened up and pelted us with the heaviest rainfall I’ve ever seen. So we all decided to have a Royal Rumble in the three-foot puddle outside the buses (laughs).

What can we expect from While She Sleeps after Warped? Are there other tours lined up yet? Any other projects in the works?

We have a lot planned but nothing I can make exclusive unfortunately. All you need to know is that Sleeps won’t be going anywhere for a long time now. We are back in business!

Tags: While She Sleeps