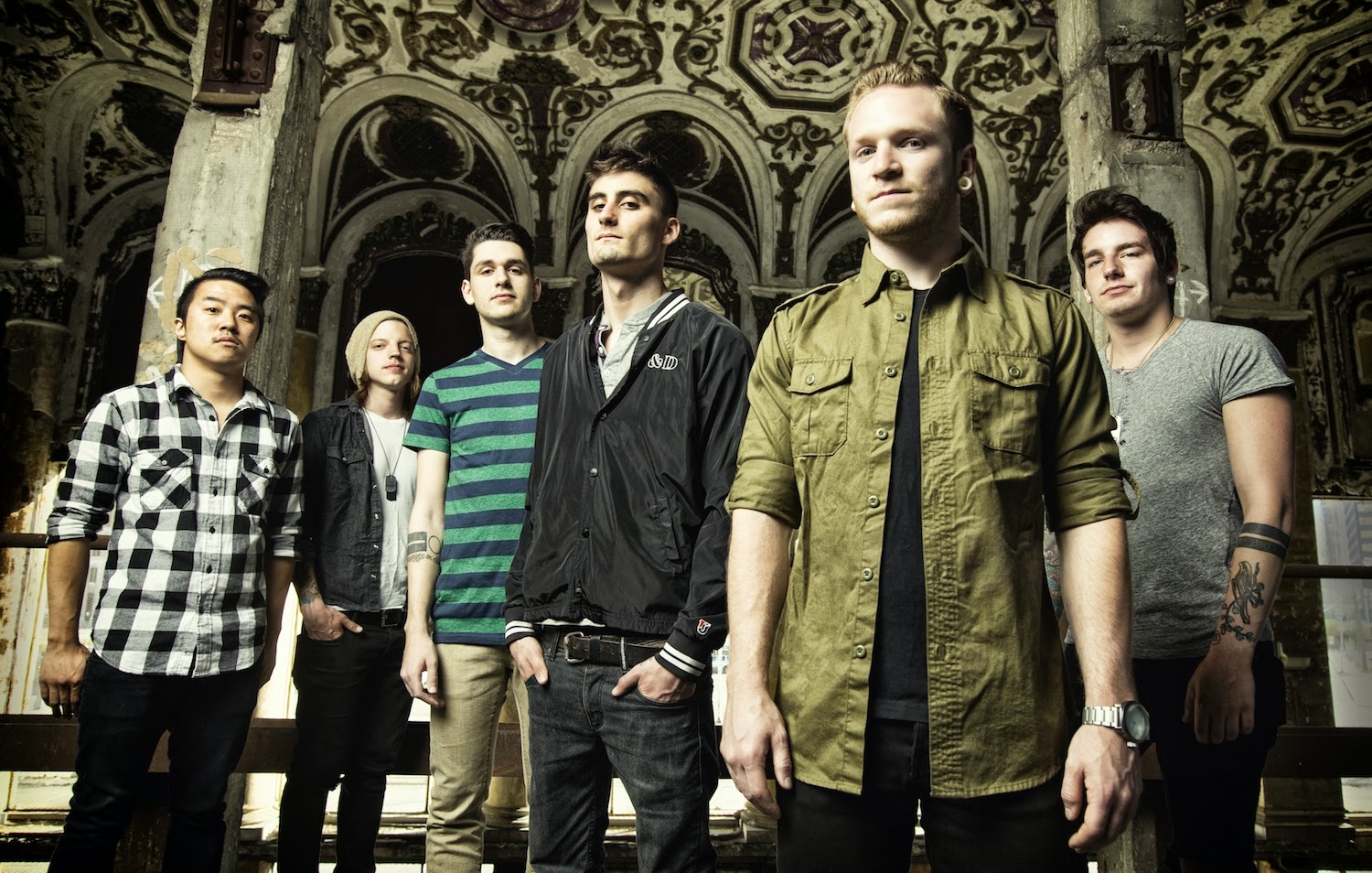 The world of post hardcore has changed a lot since We Came As Romans first signed up for a MySpace page in 2005. Now approaching the ten-year mark as a band, the Michigan sextet have since released three charting records – including their most recent effort Tracing Back Roots peaking at #1 on the Billboard Independent Albums chart – and are currently out on the road supporting Asking Alexandria on their North American tour. idobi writer Alex Rudisill caught up with vocalists Dave Stephens and Kyle Pavone at South By So What?! to talk about approaching the ten-year milestone, how their writing style changed on their most recent record, their relentless work ethic, and much more.

So tell us about this tour. What’s going on right now?

Dave: We just started two nights ago in Mission, TX, and that was good. But today feels sorta like the real tour starts because we just had a day off yesterday so it’s kinda just like we played a show together a couple nights ago. Now today it’s like it actually starts – we have a show tomorrow, a show on Sunday.

Is the idea of playing on a baseball field weird at all?

Dave: Not really. Actually a few weeks ago we just played on a hockey rink. We like sports so we don’t mind playing in sports stadiums.

So you guys are approaching ten years as a band – that’s a big milestone.

So what does that mean to you guys? Being together for so long, how far you’ve come since you guys started.

Dave: It’s pretty mind blowing that we’ve even been able to be around for this long. Not many bands are fortunate enough to be in the position we’re in. So that, you know everyday that’s something that we wake up and we’re all grateful for. That we’re able to make a living and do this every night, it’s pretty amazing. It’s gone way farther than any of us would have thought.

You guys released the last record in July, and it charted pretty high. How has it held up on all this touring you guys have been doing?

Dave: We both agree that the new songs [are] the most responsive songs we play live anymore. I mean, just “To Plant A Seed” which was our first single really ever, that song still has a great response but beyond that it’s like the crowd sings the most to new songs. It seems like everyone just wants to hear the new songs. It’s pretty cool. It’s a good feeling.

How have you seen yourselves progress? Over time, how have you made changes in your song structures and writing style?

Kyle: Oh yeah. (sings) “Lightning only strikes twice between you and I. We will fight, we will never die.” (laughs)

Dave: But it doesn’t even make sense. Lightning only strikes twice? But you know, we had to come up with the melody. The melody’s the important part, and then you write the lyrics after.

When you guys are writing, who normally takes the lead?

Kyle: Josh usually comes up with an idea, then we all chip in around that. We all have good ideas, and usually it starts with Josh then someone will be like “Oh, it’ll be cool if we like did this here.” It all piles into this like conjoined idea blob.

Dave: He just gets the whole idea rolling. I feel like without that, we’d just have a bunch of ideas all over the place. He kind of gets everything confined into one idea, then we write off that.

So what do you guys think about the current state of the genre, looking at where it was when you guys started almost ten years ago to where it is now?

Dave: It seems like it’s really revolved around the internet nowadays. Like, if you have a band Instagram, if your individual members don’t have Instagrams they’re actively using and Twitter and all that, then it’s like your band can’t do well. It’s really strange. I feel like when we first started that was still kind of a new thing, like the MySpace thing…and I think that MySpace really contributed a lot to our success. We were able to release our EP for free and do a lot of promotion there. But nowadays, that’s half the battle, it seems like – blowing up your Instagram and stuff. It’s so strange. It’s so important to so many people, and it’s just the internet. I don’t know. Us being a little older, we have a harder time understanding it as much, but you gotta try to stay relevant. We try to stay active on ours, and I guess that’s what fans nowadays want to see is what we’re doing with our personal lives and our personal Instagrams. So that’s definitely a huge change.

Do you think it’s a little bit hard to keep that barrier these days?

Dave: Yeah. Another thing that sucks is they have so much access to you. Like, I think about bands in the 90’s – if you want to tell a band that they sucked you have to go up to them and be like, “Hey, you sucked tonight.” You know what I mean? Or write them a letter or something. Nowadays, some kid can go on Twitter and be like, “Hey Dave, fuck you. You suck, your band’s terrible.” He can just go on there and be like, “Your band sucks, blah blah,” and he has access to you so easily. That’s kind of funny to me. Think about in the 90’s though – those guys didn’t have to put up with that.

What’s been the best tour you guys have done?

Kyle: You’re gonna put us in a hard spot with that one. I think my favorite tour still to this day is the Game Changers tour.

Dave: Yeah, that was crazy. A Day To Remember, Bring Me The Horizon, Pierce The Veil. Stacked. Recently, we went on The Used’s tour, and it was sweet to be able to tour with a band that really helped define us and helped us want to start playing music and influenced us so much. To be on tour with them, you know, that was pretty sweet. That was a fun tour.

So who are some of your other influences? Is there anything surprising?

Kyle: All of us listen to different music, so it’s hard to say that.

Dave: Our individual influences are all over the map. I mean…Kyle, what do you listen to?

Kyle: I listen to a lot of dance music and electronica. Detroit kind of thing.

Dave: None of us listen to that, so like –

Dave: Eric likes like math metal. Techy metal where you can’t even understand what’s going on.

Dave: Josh has a list of like fifteen bands, and he just listens to those fifteen bands over and over again and that’s it. (laughs)

Kyle: It’s been like that ever since I joined the band.

Dave: Yeah, he’s been listening to the same fifteen bands for like ten years. I like Lana Del Rey, she’s amazing. I would marry her. I would drop everything in my entire life just to be with her. If she’s listening to this –

Kyle: Well, your chance to propose is the 15th.

Kyle: Get her a little bouquet.

Dave: I will. [I’m] gonna tell her how I feel about her. I’m in love with Lana Del Rey.

What else do you guys have coming up after this tour? Are you going to take any breaks at all?

Dave: No, we don’t ever take breaks. We’re doing a ton of radio stuff in the spring. We’ve announced a few of the festivals we’re doing, and we’re doing shows surrounding them to help us get there and back. And then we’re going to Europe for a bunch of festivals there, then planning some stuff for the fall but we can’t talk about it. We don’t take breaks. Ever.

Kyle: What is home?

Tags: We Came As Romans