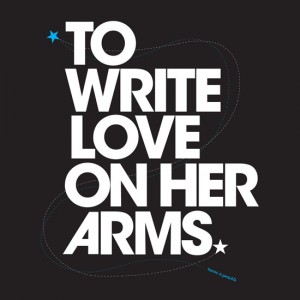 idobi writer Alexa Gallo sat down with Chad Moses from To Write Love On Her Arms at South By So What to find out more about the organization, expand on their Fears vs. Dreams campaign, and how they hope to spread their message.

Tell us about yourself and your involvement with To Write Love On Her Arms.

My name is Chad and I work in music and events for To Write Love On Her Arms. TWLOHA started back in 2006 and I’ve been with them since May 2008, so almost 6 years now.

For those unfamiliar, explain what To Write Love On Her Arms is.

We’re a non-profit organization that is out there to present hope and find help for people who are suffering with depression, addiction, self-injury, and suicide. We’re out there to encourage, inspire, inform and also to invest financially in avenues for treatment and recovery.

The organization has built a rather large community for itself over the years. How do you go about spreading the message of TWLOHA?

You can boil down all of our action into trying to address the question, “Why are people not asking for help?” It’s not because people aren’t struggling right now, because you can probably think of a half dozen people who are fighting their own battles day to day. People don’t ask for help because they either don’t know they’re allowed to ask for help or don’t know who to ask for help. All of our programs – whether it’s working in colleges, high schools, live music events, or building a presence online — are about meeting people where they feel most comfortable and encouraging a conversation. We’re not trying to convince people that these issues are real, but to build a better bridge for people that are looking for help and that’s always going to start with a conversation. Today we’ve been able to respond to over 180,000 messages through email, MySpace, Facebook, and Twitter. That’s 180,000 people who at one point were looking to connect with someone else – oftentimes saying they sat down with a counselor or joined a group, finding these points of connection for help.

You’re out on the road right now promoting the Fears Vs. Dreams campaign; tell us more about that.

Our Fears Vs. Dreams campaign has been one incredible example of continuing that conversation. A few years back at South By So What and on to today we’ve been asking people, “What’s your biggest fear? And what’s your greatest dream?” The idea is that these are things that drive us in different ways and define us in some ways, but so rarely do we take the time to think about it or even discuss it. This is a way to get it down on paper and show that we are far more connected than we are separated. The beauty of this project is that over time a lot of these fears and dreams start to sound really similar and helps show that you’re not alone.

What would you say your biggest fear and greatest dream is?

My biggest fear is that I’ll let down those closest to me – my friends or family or fiancÃ©. Not that it would make me any less of a person, but these are people I really value and want to make proud. My biggest dream is that I’d be able to thank everyone personally who has helped me on my journey towards recovery. I can’t think of anything better than that.

Is there anything that sticks out in your mind that people have told you while filling out the Fears Vs. Dreams cards?

One of the benefits of being part of this organization is that you’re able to revisit the same places and go to the same festivals year after year. I’ve been able to see people write their fears and dreams three or four times now and being able to see the subtle changes in that. A few years back one woman said [her fear was] she wouldn’t get to two weeks of sobriety and then I met her again later and her biggest fear changed to that she wouldn’t get to two years of sobriety.   It’s just one of those earth-shrinking moments that this campaign may have been her biggest asset in moving forward in her own recovery. I doubt she’s the only one that’s felt that way with this or with this organization, and it really does shrink this world down and you get to see that this is all made up of individuals.

To Write Love On Her Arms obviously has a very clear long-term goal, but what is a short-term goal the organization hopes to accomplish within the next year or so?

Every year we’re kind of pushing the boundaries on trying to be more places with more people, in more magazines, and at more music festivals. The goal of the year is to keep this going. We’ve established that To Write Love On Her Arms is not a trend – if it was we wouldn’t have made it to eight years. The hope is that we can continue to further that conversation. We’re talking to people who found out about us when they were 13 and are now 21. So what does it look like to grow with our audience but to start a conversation with a brand new class of kids coming through? This isn’t just for the 2000s era rock ‘n’ roll kid but this is growing into something way better. It’s a point of connection that has already gone beyond what we could dream or imagine. Our goal is to continue having these conversations next month, next year, next decade.

What’s coming up for the organization the rest of the year? Where will people be able to find TWLOHA?

South By So What represents the start to the 2014 festival season. We have big plans coming up for Vans Warped Tour, which we’re very excited about. We’ll also be at eight or nine other music festivals and waiting to hear back from another six. It’s going to be an awesomely crazy and busy summer.

Tags: To Write Love On Her Arms