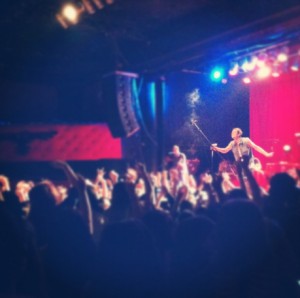 idobi caught up with John O’Callaghan and Pat Kirch of The Maine at the Toronto date of the Pioneer World Tour to talk about their new album, their touring plans for the rest of the year, and how they balance their new sound with their older material.

You guys are out on the Pioneer world tour right now. This is one of the biggest tours that you guys have ever headlined. How’s it going so far?

John: It’s going really well. It sounds so official — Pioneer world tour. It’s officially been fun, for sure. Come Friday I think it’ll be officially halfway done. It’s hard to think that we have another half to go, but it’s been a lot of fun so far. People are showing up and being supportive, so we can’t complain about anything at this point.

You brought Lydia and the Arkells out on this tour with you. What was it about those two bands that made you decide, “You know what, this is our big world tour and these are the two bands that we need to have on it.”

Pat: It all kind of comes down to the music.

J: I mean, it only comes down to the music. I got Arkells’ first record when we toured here in 2009 on An Evening With… and some kid handed me their record, and usually I’m kind of weary but the kid was really enthusiastic about it so I sat down on the bus and put it in and really just fell in love. I listened to that nonstop for a while. I just love that they have a really good way of mixing kind of a Motown old school soul vibe in with like upbeat rock music and I think that’s really unique these days. And then when we found out they were putting out their new record and started talking to them on Twitter, it seemed like a good fit for them to open and for us to swap some dates in Western Canada, which we haven’t been to. And then with Lydia, fortunately our buddy Tanner [Radcliffe] who works over with our manager started to work with Lydia and that kind of just worked in our favour. We’re big fans of their band and it just fell together pretty nicely. With our track record recently of who we’ve been going on tour with, I think it’s another step in an awesome direction and it’s not something that you’ve seen from the Maine in 2007 to 2010 or 2011. And it helps us play in front of new people because both of them are bringing people, so it just seemed like a really good fit.

Obviously the Pioneer world tour is in support of the new record Pioneer. Like you were saying before, you guys have been moving in a different direction than where you started out. How have kids been responding to the record?

P: It couldn’t be going better. Anytime you put out a new record you’re kind of unsure of how people are gonna react to it, and with this record I think it was even more of a departure from things that we’ve done in the past so we were kind of unsure how the reaction would be, but it’s been incredible. I think people have really gotten behind the songs and gotten behind how the album was recorded and released, so we’re very very happy with it all.

It was definitely a risk not only taking your music in a different direction but you did your last album on a major label and this one you did independently. With all those different factors, how did you approach this record differently?

J: I think the process in its entirety was completely different than anything we’ve ever done before. We didn’t have anyone breathing down our necks telling us what to do and I think that allowed us to be as creative as we wanted. And I think the idea that we were in control definitely empowered us to try to explore different realms of music and maybe take a different approach to the entire thing. Fortunately we were able to put it out and I think at the end of the day that’s the biggest thing for us.

P: The way this record was made, you know, hopefully it’ll happen again, but this could be the only time in our career really where there wasn’t any pressure from anybody. There wasn’t even really a lot of pressure from ourselves either because it wasn’t even like it was the time to make a new record yet.

J: And we weren’t even certain that we were gonna be able to put the songs out.

P: Yeah, so we were just kind of recording songs for the sake of recording them and just seeing how far we could take it. So I think that was for sure a unique experience that I don’t know if we’ll ever be able to have again.

Do you feel like you were primarily driven to take things in a different direction from knowing you had all this freedom and there wasn’t pressure?

J: I don’t know what it was. I think becoming more aware of what we enjoy as music enthusiasts, the music that we listen to influenced not necessarily the overall sound, but I think the attitude was most definitely influenced by acts like Tom Petty and Bruce Springsteen and even Jack White. I think it was the mentality that you don’t have to compromise. It’s okay to do things your way. And I think whether we figured out what “our way” is or not, we got to experience freedom for a little bit. And I think that was what sculpted the songs — just the idea of being free and the idea that you have a blank canvas. We’re really proud of it. If we weren’t really proud of it, we wouldn’t have put it out, you know? But we just felt really strongly about the work that we put in and the steps that we took to get to the point where we did. It was an incredible feeling and hopefully we’re allowed to feel that way again, but time will only tell.

Does it ever feel strange playing your newer songs mixed in with your older songs from when you had a different sound? Is it hard making sure you’re playing everything your fans will want to hear?

J: I don’t think that’s as hard as everyone thinks it would be because first and foremost, we’re music lovers. So when we go to a concert of an artist that we really enjoy, just as anyone else would, we expect to hear “the gems,” you know, the ones that you know they have to play and you know that you want to hear. And it’s kind of laid out for you online seeing the response, so you have a pretty strong idea of what songs people would like to hear. Of course, at the same time, you can’t please everyone. And you also have to be happy with whatever it is you’re playing onstage or else you’re not gonna be enthusiastic about the show. But I mean, that’s a learning process in itself and it’s just something that takes time. On this tour I think we have a good balance of new and old and we’ll continue to battle with that in the future, but we’re never gonna go out and just play the new record and new songs that you’ve never heard before. I don’t think that’ll ever happen.

With some of your older songs, like Everything I Ask For, you’ve been doing refurbished versions that are more in the style of the new album. How have kids been responding to those updated versions?

J: We were toying around with the idea of doing that again on this tour, but Pat has a good point when he says that if you have too many different versions of one song, how is anybody supposed to latch on to any single one? So I think right now the goal would be to let that one breathe for a little while and not harp on it, and then when we go back to playing it maybe play it the original way.

J: But the ones that we have kind of morphed, it’s not unintentionally. We definitely want to spice it up for us but we also want to make it not too out there for the set. On this tour we’re doing The Way We Talk but we’re not playing it straightforward like we used to and I think it fits the vibe. And I mean, it’s still a pop song. It’s a straight up pop song even when we play it on this tour. So we’re keeping the integrity of the song, and we’re not changing lyrics or anything like that, so I think people have been pretty excited about it.

It’s a little up in the air right now but if you had to speculate, what would you say will be happening for the Maine after this tour and into the future, if the world doesn’t end?

P: After this tour, we’re gonna do a bunch more touring.

J: We know up until July for sure. We’re going back to Brazil. We know that we would definitely like to visit the United Kingdom and Europe on this Pioneer run, which we will.

P: And then we’ll go back out in the States again in the fall. And then after that it’s kind of up in the air.

J: That’s the part that we can’t even speculate about, because…

P: We know that at some point in the future there are gonna be songs that will be written and recorded, and we also know that we will be on the road again. So it’s just a matter of what the order is.

J: Music will come out…touring will occur. When? Where? I’m not sure yet.

We’ll have to stay tuned and find out. Thank you guys so much for talking with me!

J: It was a pleasure.