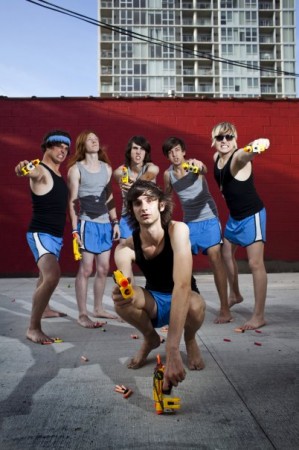 idobi had the chance to speak with Rocky Loves Emily’s Andrew Stevens (guitar) and Stephen Hull (bass/keyboards) about everything from their current tour supporting Sparks The Rescue to their newest record Secrets Don’t Make Friends to pirate’s booty at the Connecticut stop of the Surrender Your Booty Tour.

You guys are only about a week in, but how has supporting Sparks The Rescue on this tour been so far?

SH: It’s been great. It’s actually been a lot of fun.

AS: Can we tell them about last night?

SH: Yeah, it was kind of crazy. Okay, so Alex [Roy, Sparks The Rescue vocalist] puts on an awesome show every single time he plays, and he was hanging from the rafters last night and the guy at the venue was mad that he was hanging from the rafters and he was like, “Don’t do that!” and [Alex] looked at him and was just like, “Forget you, man!” And he just went up and did it again, and they totally cut the show short and a lot of people were pissed. But at the end of the day, everything ended up being okay. It was just kind of crazy. That stuff doesn’t happen all the time.

AS: Alex is a rock star, and that’s why the Sparks The Rescue tour is great.

So what cities are you guys most excited to see on the rest of this tour?

SH: I’ve seen every single city on this tour except for Providence, Rhode Island.

AS: I’ve actually been really looking forward to this show too. I hated The Space the first time we played here, but, this is like the third or fourth time and I’m starting to enjoy it.

AS: I didn’t like it at all. It was always snowing and depressing.

SH: That’s true. The first time we came here there was like, ten feet of snow.

AS: But we’ve never been here in June. This is really nice.

Does the band have any plans lined up for after the tour ends?

Do you guys have a favorite song or track you’re most proud of from Secrets Don’t Make Friends?

AS: I personally enjoy the last track on the album. It’s called “The Root of All Evil” and I think it’s the most different thing musically that we’ve ever done. It’s fun. I really enjoy playing it live.

SH: I would say mine’s probably “Dream” because it’s a real song about what’s truly in the hearts of all of us in the band — just living in this reality and the dreams we have to be the people we aspire to be. Tonality-wise, that song kind of just captures a lot of the emotion we’ve been going through in the past couple of years.

Are there any songs with stories behind them that you particularly like or find the most interesting?

SH: Every one of them has a story. Honestly, for me, my favorite story for the record lyrically would probably have to be “Guilty Guilty” which is a song that Sean strictly wrote about one of his ex-girlfriends and he worded it very cleverly and straight to the point, and if you knew the girl, you would laugh every time you heard that song.

You guys released the music video for “Secrets Don’t Make Friends” back in March. Where did you draw your inspiration for the story and how did the video come together?

AS: We filmed it when we were in Arizona while we were recording the record, actually, so we filmed this video literally a week after we had written the song. We wrote it and we were like, “This is going to be one of the most popular songs on the record, let’s do a music video for it.” We had a couple of friends in Arizona that we were staying with, so we just kind of built this idea off of all we had to work with. We were just like, “Well, we’re staying at this house, we can just make it a party house kind of video,” and then…I mean, the girl is based off of Brandon’s ex.

SH: And we turned it into our music video.

So these next questions are totally unrelated to your music.

SH: These are the ones I love.

This summer, what other artists’ albums are you most excited for?

SH: Oh wow…I don’t know what other records are coming out right now.

AS: Sparks The Rescue has an EP coming out in July!

SH: I’ll definitely check that out. It’ll be good for them. I think they got to do a lot of what they wanted to do with it as far as music goes. So I think they’re excited about it too. I think we all want to check it out when it comes out.

Alright, last question for you guys: since this is the Surrender Your Booty tour and some of it is kind of pirate themed, which member of the band would make the best pirate?

SH: Oh, interesting question. I’m going to go ahead and say it’s probably Pete, or Sean because he kind of lives the most pirate life. Like, he just dresses like a super hipster grunge kid and I just feel like he’s the guy that every once in a while we’ll get an “arrrgh” out of him. You know what I mean?

AS: The worst pirate in the band would probably be me. Don’t you think I’d be a pretty bad pirate?

SH: Yeah, you’d be like, “Come on guys, let’s resolve this issue. Let’s not steal all their gold, let’s just make a deal with them…let’s talk it out.”

AS: Yeah, I probably wouldn’t last long. I’d probably end up getting traded into slavery and I’d be the guy in the bottom of the ship rowing until I passed out. Oh man, poor Andrew.