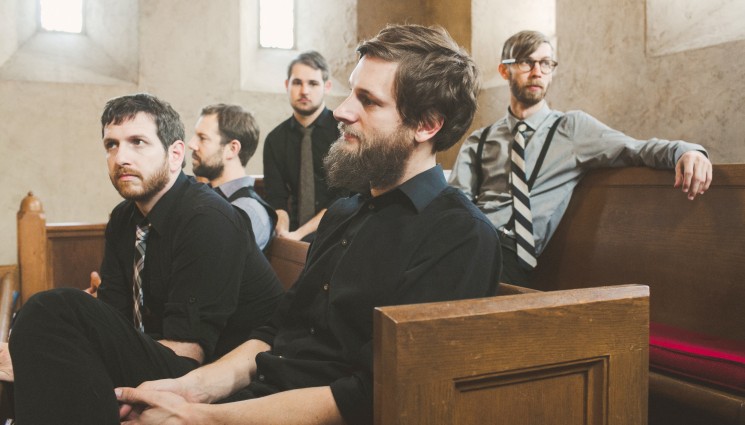 One of the most impressive bands we got to check out at CMJ this year was Austin, TX’s Quiet Company. Having established themselves as one of the best bands to come out of their home state in the past few years, the band is setting their sights on taking over the rest of North American with their irresistible mixture of pop and indie rock. We spoke with trombonist Cody Ackors and drummer Jef Weathers at the end of the week to talk about their CMJ experience, their plans for the next record, and their very brief career as the next big dubstep act.

You guys are here for the whole week of CMJ. How have your showcases been going so far?

Cody: It’s been a lot of fun. They’ve been getting better and better. Last night was the Texas Takeover showcase and that was really cool, like a little family reunion. I’m excited about [the Big Picture showcase] tonight.

Other than your sets, what have been some of the coolest parts about getting to check out CMJ, especially as a band that’s from out of town?

Jef: Well, it’s been exciting because we’ve worked closely with a press company this go around. It helps having someone else kind of throw your name around a little bit. All the press stuff that’s been happening is really cool. The Hotel on Rivington [where the press lounge is] — I’ve had a very good time with that view. It’s just been cool mingling, getting to meet a lot of other bands from out of town. I feel like I keep meeting a bunch of film guys that have a bunch of cool projects going on, so hearing their stories about documentaries they’re working on or music videos they’re shooting, it’s been cool. Same thing happens in LA — you go there and everybody’s doing something pretty awesome.

Obviously you guys are from Texas, but I feel like I’ve been hearing your name a lot more around this area lately. How do you guys approach coming up here where you’re a little bit less known? Obviously you’ve really established yourself in your home state, so how do you approach things differently when you’re playing in front of an audience that hasn’t necessarily heard of you before?

Jef: You’re outside of your comfort zone for sure. It’s getting more comfortable now because we’re seeing venues over and over up here just the way we see them over and over in Texas. Seeing the fanbase grow is different because they’re harder to manage. You know, it’s harder to have a retention rate because we see people more and have more personal connections in Texas. Up here, you have to kind of like, fight a little harder to get through the different mediums.

Do you guys have any other CMJ plans left before you head out?

Jef: This is it, actually. This is the goodbye.

Cody: Yeah, we’re getting out tomorrow. We’re going to Atlanta.

You guys are heading back into the studio in the new year. You accomplished a lot on this last album cycle — what are some things that you’re hoping to accomplish with this album, both musically and in terms of how you’re going to reach people?

Cody: Well, I think musically it’s a more collaborative approach and more organic songwriting whereas generally Taylor’s come in with a really fully fleshed-out song and kind of showed us what parts to play. We’re all writing together — the music part of it, the lyrics and structure is all Taylor. It’s kind of a more organic, equal experience. We’re just doing this album cycle bigger. We’re bringing in what we feel is our best team ever to help promote it effectively and working with a producer we’re really excited to announce hopefully pretty soon.

Jef: This is the first time we’ve really tried to make sure all the puzzle pieces were in place before doing things. Nobody ever says they regret putting out a record later — everybody says they regret putting it out too quick. We’re really trying to involve our community and our fanbase a little more in this go around and really try to use their resources and their input. We’re doing a Kickstarter too and making sure we have the funds, because like, you get what you pay for in the music industry. I mean, there’s definitely like the bullshit with like, “I paid half a mill for this producer,” because you’re buying his name and his friends, but we just want to go that little extra mile to make sure we have some quality pieces in this one. The Kickstarter’s a big piece as far as fan involvement goes. Anything we ever do is really an accomplishment of theirs as much as it is ours because it’s their encouragement and their backing and energy that I think we really vibe off of. It’s a good two-way exchange, semiotic relationship.

I feel like Kickstarter is really the way to go these days. Almost every band that I’m seeing that’s putting out an album is doing that.

Cody: The old model of having a label give you an advance to work on your record kind of doesn’t exist too much anymore. And so if you need that, you kind of have to offer a pre-order system, essentially, for your fans and give them unique opportunities to be a part of the record-making process.

Jef: Absolutely. It’s really a good way to like, just provide something different than just like, “Here’s another record.” Like Cody’s saying, providing unique experiences and providing unique opportunities for them to be involved. Because we want them to be — I mean, it is more of a collaborative effort between the community and the artist these days. I think so many artists, we got used to them just sort of being up in the ivory tower, gracing us with their bullshit, and now it’s like, you know, the best art comes out of a community. The best art comes out of people that are doing things with other people — and by that I mean living life with other people, not just playing music with them, you know?

It sounds like this album is going to be a lot more collaborative on all sides of things, both with the music and with the fans. That’s really cool. Are there any bands you guys have seen at CMJ this year that have completely blown you away that you didn’t know beforehand?

Cody: Sol Cat’s really good. This was our first time seeing them, they’re some new friends from Nashville. We haven’t really gotten to see many shows, honestly. I wish we would, but it’s kind of just been the bills that we’ve been playing. But I’d have to say my favorite out of the bands I didn’t know was Sol Cat.

What about your friends in Texas bands?

Cody: Wild Child is a really great band. I played trombone on their record. They just put out a record called The Runaround, Ben Kweller-produced, and it’s really good. The Ton-Tons from Houston are really good —

Cody: The Ton-Tons! That was the singer of Sol Cat. I don’t know his name. And then, there’s a singer/songwriter guy named Danny Malone out of Austin who’s really good. He’s very interesting and probably one of the most prolific guys I know. I feel like every time I run into him, he’s worked on a new song that’s better than the last one I heard.

Especially now that you guys have been spending a lot more time in other parts of the country and experiencing other really vibrant music scenes, what are some of the things about the Texas scene that that’s made you re-appreciate or see ways in which it’s unique?

Jef: It’s changed a lot the last several years with Dallas and the whole Deep Elm thing. It was very mellow for a while — there was that whole emo vs. metal thing that happened like a decade ago, and then I feel like Deep Elm kind of died and it kind of took away a good driving force of the music industry there. Austin’s so eclectic, I think it just has an identity crisis 24/7 on top of everybody just chasing the hipster thing there. So I mean, you’ve seen everything. There’s a good staple of punk kids. You see a lot of trends come and go, between chillwave and dubstep and all that stuff.

When are you guys gonna do a dubstep song?

Jeff: We have. Have you seen ours?

No. Did you actually do that? Is that a real thing?

Cody: Search “Quiet Company dubstep.” It was just a little thing we pulled out at a show once. It was…unique.

I’m both looking forward to seeing it and a little apprehensive.

That’s how I’m going to end the interview. This is your new favorite band, Quiet Company.