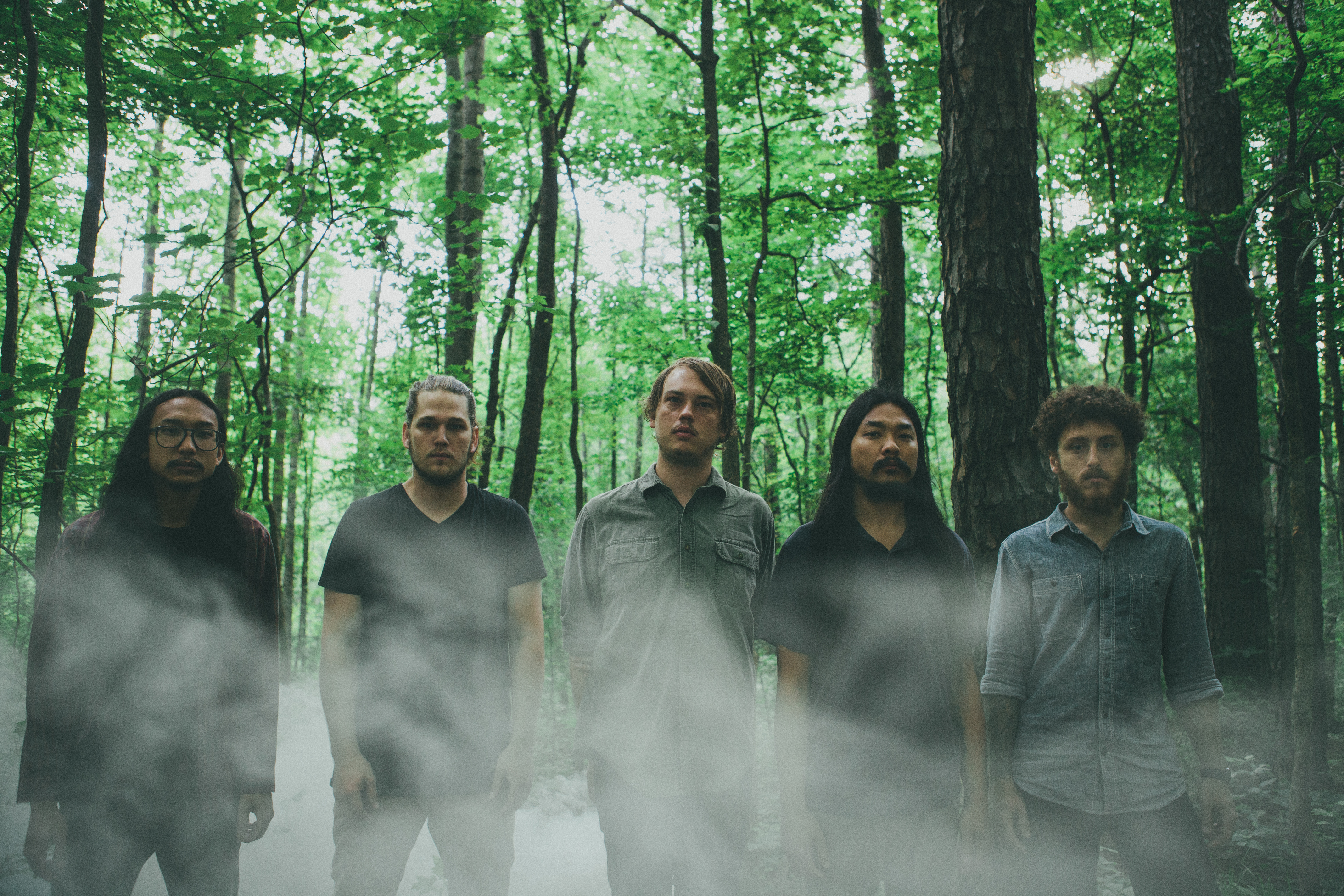 Atlanta’s O’Brother have been building their name the past few years on tours with the likes of Thrice, Circa Survive, and Moving Mountains, but with a powerful new album – August’s Disillusion – and two months on the road as first-time headliners, the band is undoubtedly taking things to a new level in 2013. idobi editor Eleanor Grace sat down with vocalist/guitarist Tanner Merritt and drummer Michael Martens to talk about the new record, how life on the road as headliners is treating them, finding hope in disillusion, and more.

You guys have been on the road for about a month now. This is your first ever nationwide headliner and you guys went all out — you’re doing pretty much two straight months on the road covering almost the entirety of the continent. How nervous were you?

Michael: We had to actually literally pull Tanner into the van.

Michael: He laid down in the driveway like a little baby and said no.

Tanner: It was definitely nervewracking, like, it being your tour and so much more work. We wanted to go through and do everything — we listened to every single local band that was on every show, wanted to approve every venue that we played. And I mean, it being our tour and mostly our draw, it’s nervewracking cause you have no idea who’s gonna be there from night to night.

Have you guys been happy with the turnout so far?

Tanner: Yeah! It’s so different, the level we’re at right now — from market to market, your crowd can double. I feel like once you reach a certain size, it’s pretty consistent, but some shows have been four or five times as much as others.

Michael: But the baseline has still been a really good feeling.

Tanner: Yeah. Those places that are small, we generally go into it knowing that they’re gonna be kind of small. Like, somewhere like Des Moines, Iowa.

Michael: Then you have shows like Denver where like, I felt good about it going in and I knew it was gonna be a good show, but until Chicago it was the best night of the tour.

Nice! What happened in Chicago?

Michael: It’s just seriously like a second home. Anton lives there now so we have more of a connection to the city, but we’ve for some reason just always had really good shows there. Just really fun — everybody that comes out is super appreciative and they listen well and it was just a good night.

Aside from the cities where you’ve been finding you’ve been drawing really well, have there been any standout memories so far or surprises?

Michael: Um…it’s been kind of a blur, to be honest.

Michael: If you were to name a city and say, “Tell me a memory about that show,” I could probably start at a memory and eventually divulge a bunch of information, but I mean, it’s kind of just what Tanner said about being busy. Our days are really long and they’re going smoothly but there’s just so much packed into it.

Tanner: Yeah, we’re pulling like fourteen, sixteen hours days most of the time between drives and load-in. We’re first to load in and last to load out every single night.

Michael: Leaving a city at nine, driving an average of probably six hours, loading in at three or four and leaving the venue at two. And then by the time you go to bed, it’s probably like four o’clock. I feel like my daily time schedule has completely shifted. My body is awake at different times now. It’s something we never really experienced doing supporting tours.

Tanner: Everyone joins a band to not have to work a job, but then it ends up being more work with less money. [laughs]

Tanner: We got so fucked. But it’s totally worth it. None of us got into this industry for money.

Michael: And we’re not afraid of long hours.

That’s good. You guys are definitely putting work in. So one thing I always find interesting to talk to bands about when they’re doing headliners, I always love hearing what it was about the support bands that really drew them to you, especially on your first headliner. What was it about Daylight and Native that made you decide, “These are the guys that we gotta have with us?”

Michael: I’d seen Daylight and Anton had seen Daylight. I saw Native on the Thursday tour and they were awesome, and we kind of had some familiar friends with them.

Tanner: Yeah, we had a lot of mutual friends. We saw them supporting Thursday and on that bill they were the standout band. With Daylight, a lot of bands that we’re friends with had taken them out and said that they were awesome. They’re on the same booking agency as us and we just have so many connections with them. We played a few shows with them right before this tour —

Michael: I think we had just confirmed them for the headlining tour, then maybe like a day or two after that we booked some off day shows on the tour we were on before and Daylight played them, and it was cool cause it was like this pre-introduction, feeling each other out, sniffing each other’s bums.

So this is what happens behind the scenes.

Michael: Yep, fourteen people just doing that kind of stuff in a room this size.

Tanner: Yeah, it’s kind of the same as a dog park. Smells the same. Same behaviours.

Tanner: But with grown men.

Michael: “Here you go, boy, get off your leash and into this venue. Don’t leave until your seven hours are up.” [laughs] But it was really good hearing when they were both able to do it cause they’re both bands that we’d wanted to tour with for a long time and just had never really linked up.

So obviously you guys are on the road supporting the new album. It actually came out a few days into the tour. Did being on the road help you keep distracted and not be too nervous and wrapped up in the release?

Michael: Oh, I was still wrapped up and nervous. I was distracted, thankfully. But we planned the tour around it, which we didn’t have the luxury of doing with Garden Window. It was nice cause we actually got the shipment of records in on the 13th [of August], tour started on the 14th, and the record came out on the 20th. So it was kind of cool, especially starting in the south, having people that have seen us eight or nine times be able to go to a show on the 15th and pick it up.

Tanner: Also it was beneficial as far as momentum because we were already in the stages of pushing the record with PR and stuff like that so we kind of covered both of those things in one.

One thing that I think is really cool about this record is that in some ways it’s a departure from your earlier work, but it’s also unmistakably O’Brother. Can you speak to your songwriting process and building what you feel is that quintessential O’Brother sound?

Tanner: I think it’s more of us just slowly honing in on like, the sound that is O’Brother. And I think we’re getting closer and closer with each writing session. I’m glad that it still is unmistakably us because we just want to get better. It’s kind of like the light at the end of the tunnel — I don’t know if you ever completely reach it, but you’re always going in that direction of like what you ultimately want to be and sound like. So I think it was just a natural progression for our band.

Michael: I agree. Even writing, I didn’t feel like we were going in a crazy different direction or anything, but you always worry about how it really translates to somebody else. Cause I can sit there and listen to my parts and pick out the similarities in writing style between Garden Window and Disillusion, but you don’t know if like the average music listener is really gonna do that or if they’re just upset because it’s different and there isn’t like an eight minute ambient part on every song. So it was a relief, I guess. Some people said it sounds completely different but…they’re just some people. It’s good to be different,. You gotta be a little different but still, like you said, just remain at the foundation who you are.

Tanner: We’re the type of band that I don’t think ever wants to put out the same record twice, but never really wants to sacrifice what our sound has become.

For sure. I feel like you did strike that balance with this record.

I read a quote from you, Michael, that I thought was really interesting. You said that the record is not about the hopelessness of disillusion but instead a hopeful kind of disillusion. Could you expand on that?

Michael: I’ve just always felt like it’s okay to ask questions. I mean, not to put anybody down who does feel like they completely have their shit together, but I just don’t think anybody really does every day every waking hour and everyone’s gonna doubt something that’s a part of their life, whether it’s spiritual or relational or some facet of the way the world works. But I think in that questioning, there should be hope that if you’re asking questions, it’s because you believe there’s an answer. So even if something is engulfed in disillusion, it’s gonna work out. If it doesn’t then it doesn’t but at least you know.

Did you guys set out to make a record exploring that or did it just come out in the writing process?

Michael: I can only really speak of the musical aspect of it, but for me, I think we were all on the same page. Last summer I think we wrote like eight songs and maybe six or seven of them ended up on the record. We knocked it out in like two weeks and everybody kind of just seemed to click. Garden Window had a similar feel, I think — it wasn’t just pessimism and doubt, it was just a healthy questioning of everything you experience. Lyrically…I mean, Tanner, did you know what it was going to be?

Tanner: I mean, not really beforehand. But it like most of the lyrics were written at the same time, within like a month’s period of time, so there are obviously going to be common themes throughout because you’re just writing about where you’re at in that moment. And then it definitely became that.

Well, congrats on the record and thanks so much for talking with us!

Catch O’Brother on the road with Native and Daylight for the rest of this month – check their Facebook for dates and details.