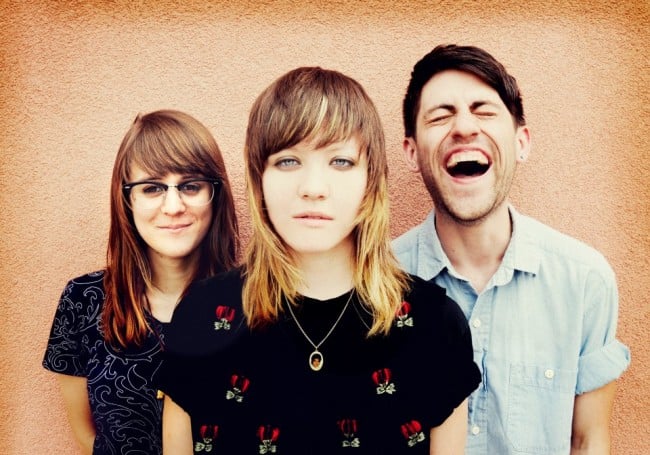 idobi editor Eleanor Knowles had the chance to catch up with Now, Now at the Toronto date of their tour with Motion City Soundtrack earlier this week. The band talked about being on the road with some of their best friends, their appearance on Jimmy Fallon, writing plans after the tour, airport sleeping habits, and much more.

Eleanor here with idobi Radio; we’re hanging out in the Now, Now van after their Toronto show. How’s it going, guys?

How’s it feel to be back in Toronto? I heard you guys got stuck at the airport here a few months back.

Jess: We weren’t really stuck, we just had a really long layover. It was like six hours or something.

Cacie: I didn’t sleep the night before, so I was sleeping upright in a metal chair with my head against a metal table. And I was so mad, because I —

Jess: That wasn’t the right airport. You’re thinking of somewhere else.

Brad: We’ve done that at a few airports.

Cacie: Don’t listen to me.

Jess: This one we were excited for because we’d had a little time off, like a few weeks, and it was our first time going back to the UK in like three years. I was pretty wired at that airport. I was playing Slender, and I almost screamed in the airport.

Cacie: That wasn’t the airport that I slept at? In the chair?

Jess: Well, you sleep everywhere, so you probably did sleep at that airport.

I’m gonna be honest with you, Cacie…there are a lot of pictures on the internet of you sleeping.

Cacie: That’s because the second I fall asleep, Brad’s like, “HEHEH,” and takes a picture.

Maybe he’s making you a quilt.

That’s some serious Inception shit right there. Like, a quilt of you sleeping and you can sleep under it and then he can take pictures of that and make a new quilt.

Cacie: Yeah! But this one [points to Jess] literally falls asleep on the floor of the venues like every night.

Jess: That’s because Brad and I have the sleep schedules of elderly people.

You guys have been on the road with Motion City Soundtrack and Jukebox The Ghost for about five weeks now. How’s the tour been going so far?

Cacie: This tour’s been so relaxing and so easy that there’s nothing to say but good things.

Jess: We went on tour with Motion City in Europe right before this tour, and this is our third tour with Jukebox. So it’s like a tour of friends for us. It’s just been really easy.

Cacie: And the people that are touring in our crew, our tech and our merch person, they’re our best friends, so it’s just so easy.

In addition to this tour, you guys also hopped on a date on Taking Back Sunday’s Tell All Your Friends tour. Obviously that was an album that has gone on to be really meaningful to a lot of people. What was it like to get to be a part of that?

Cacie: I don’t even know how to explain that show, because it was like both tours just combined. It felt like a festival — it didn’t feel like a show. It was way too many bands for one show. That should never happen. [laughs] It was awesome, but I can’t believe kids stayed. I mean, it’s Taking Back Sunday, so I understand why kids stayed, but I mean…

Brad: It was weird logistically, but it was still a cool show.

Cacie: It was a really weird crowd for us because imagine kids that are going to see Taking Back Sunday, and then we get onstage, and they’re like “…what is this?” [laughs] But the night itself was really fun. But playing for us was a little strange because no one really knew what to do with us.

Brad: I think it was good, though. There was a good reception afterwards. It was just like a new crowd for us.

Brad: So I mean, I’m never surprised if people…I mean, they’ve never heard of us before. But I thought it was a good crowd for what it was.

Speaking of new environments, you guys also had your television debut last week on Jimmy Fallon. Tell me about that.

Jess: It was seriously like…surreal, almost. We got there and it’s just a lot of waiting. You get there so early in the morning and they film in the late afternoon, so it’s just setting up and soundchecking and then you sit in the band room for hours. And then they do your hair and makeup, and then you sit there for hours. And you watch on a little tv in the dressing room waiting for them to call you up to play, and then you go out there and you play and it’s over in what feels like three seconds. And you’re just like, “What just happened?”

Cacie: Honestly, the whole performance part of it was done in probably ten minutes. We got there at 9:30 and we played at 6:30.

Jess: Yeah, we got there nine hours early.

Cacie: It was insane. I have never been that scared. I don’t even know how to explain how scared I was. But it was so amazing. I want to do it again with the next record so I can be comfortable and excited. I mean, I was excited, but it was scary. Amazing and scary.

You referred to it as a surreal moment, and I think it would be safe to say that you guys have had a lot of those over the past year just because so much has happened — you put out your first full-length under the name Now, Now and then everything just kind of spiraled from there. What would you say has been the most surreal thing that has happened to you guys in 2012 as a band?

Cacie: That was out of control. I can’t even.

Brad: I think just the year as a whole.

Cacie: Yeah, the year as a whole and how well the record has been accepted in the music community.

Brad: We didn’t really know what to expect when we wrote and released it, so to see it actually like —

Cacie: To see something happen with it, it’s crazy.

That’s awesome. It’s been really cool to see. Obviously you guys got to cross a lot of things off of the band bucket list in 2012, so what’s left on the list that you guys would like to get to in 2013?

Cacie: I want to do Jimmy again. And I want to write a really good album.

Jess: Yeah, I think we’re ready to start writing again, as strange as that may seem.

Cacie: I want to write an album that we’re really proud of and that is really solid.

Jess: I think some people are kind of surprised when I bring up that we want to start writing again because it seems like we just started doing a lot of stuff with this record. It just came out this year in March, so only nine months ago, but for us, it feels like we’re ready to make the next step because we’ve been playing a lot of these songs for like a year and a half.

Cacie: More than that, even. Some of them three years.

Jess: And we’re just ready to start progressing. The three of us, the way we write together has kind of just been developing since we started identifying ourselves as a trio. And I think we’re ready to bring it to a new record and start from scratch and bring something else to the table that we’re all gonna be really excited for.

Where would you want to be when it happened?

Jess: Just with people that I want to be around. I want to be in a happy environment, and then I want to not even know that I just died.

Cacie: I want to be holding Brad’s hand.

Brad: I want to be surrounded by Christmas trees.

How long would you survive?

I was going to ask about survival techniques, but I guess you’re doing the opposite.

Jess: The second a small crowd of zombies is identified, I’m killing myself.

Cacie: Yeah. I’m just going to do it immediately.

Brad: I think I would try and like, get through it, but I’m also really tiny and helpless, so…[laughs]

Thankfully I think we should be safe, so if we do make it to 2013 okay, what are some bands that you guys think are really underrated right now but ready to blow up in 2013?

Jess: No, I don’t think they’re underrated, but they’re ready to blow up.

Maybe not underrated but just underexposed.

Cacie: I want them to get fucking huge.

Awesome. Well, thank you guys so much for taking the time to talk with me. Anything else to add?

Cacie: Just…don’t ever forget this moment.