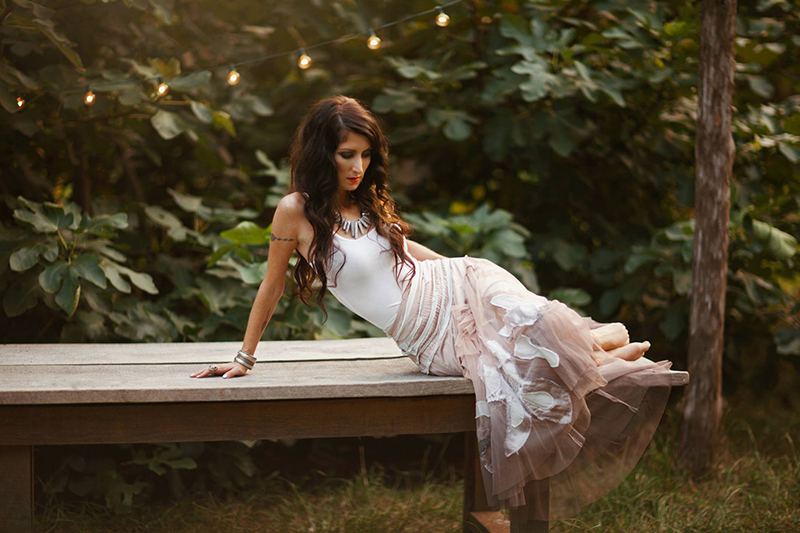 Alabama native Maria Taylor is no stranger to the music world. In addition to her solo material, she’s well known as part of dream-pop duo Azure Ray, her studio and touring work with Bright Eyes, and collaborations with everyone from Michael Stipe to Moby. We spoke with Taylor after she performed a truly lovely CMJ set to talk about her new record Something About Knowing, her songwriting process, how motherhood has changed her perspective, and more.

You’ve got a new record coming out in a week and a half, and tonight’s the first night you’re selling it. How excited are you for people to finally hear it?

You approached this record a little bit differently. It’s your first record since having a baby, and you said that this is your first record that you’ve approached from more of a happy place — you weren’t just writing songs because you were upset. Can you explore that a little more and talk about the paradigm shift that you experienced?

You know, for years and years, sometimes I felt like I even would put myself in situations to get hurt because that’s just when I felt prolific and creative. I think with anything, it’s just practice, and I had to just work at it, cause I felt inspired and I felt so happy and I had all this emotion but I didn’t know how to, like, translate that into music.

Because you’d only ever written sad songs.

Yeah. So I just kind of worked at it little bit by little bit. And I would write these songs and I didn’t know sometimes like, “Are they good? Are they not? They’re too happy,” but then I was like, whatever, I’ve just gotta write what I feel and just put it out there. It took me a while. It took longer than most records, but that’s also because I was juggling being a mom, which is completely time-consuming. More than you would even realize.

In addition to starting your own family, I feel like you also had a family vibe to the record because you had your brother play on the record and you had some other really close friends work on it. Would you say that’s something that you really strived for — keeping the people really close to you?

Yeah. And I always do that with my solo stuff. I usually always tour with my brother and sister or all my close friends and I always work with my good friends and family. I just like it that way — it just feels good. And I just feel fortunate that I have family members and friends that are so talented, so why would I go elsewhere?

Definitely. Speaking of which, you’ve been really closely associated with Bright Eyes over the years from your involvement there and you’ve also collaborated with a lot of other artists. When you have people coming to your music because of those associations, are you ever nervous at all about people going in with preconceived notions or are you just happy to be able to reach new ears through that?

I’m just happy. I feel like I can hold my own, you know. I’ve been making music since I was three years old, so I feel like it doesn’t matter how they find me. It’s like, I’ve been doing this forever so they’ll see it’s not really a reflection of those people, it’s just a means to find me. Any way to get to reach people, I’m all about it.

In addition to having kind of a different perspective for this album, what were some other influences musically and around you that you were drawing on in particular?

I try not to think about much when I’m writing a record. I like to clear my head of thoughts and just like, whatever’s in my heart, whatever’s in my chest that needs to come out, I just write it. I try not to listen to too much music when I’m writing cause I’m afraid I’ll unintentionally copy it, so I don’t listen to much and I just kind of meditate. So I was just drawing from my son and that experience, and I got married this year, and living back down in Alabama with my family and just the weather there and just everything, just taking it in.

Now that you have a family and everything, does the music world feel at all different because your time is split differently?

A little bit. I mean, my priorities have changed. Now it’s all about my son. I love making music and I want to do it forever, but at this point whatever’s best for him is what I will do. Like, I would quit everything for him. So it’s kind of switched like that. Before, sometimes I felt like it would even damage my friendships and relationships because I was like, “No, I gotta be on the road for eight months.” Like, I missed all my friends’ weddings, because I was so determined that I had to give 150%. But I don’t feel that way anymore. I love it as much, but now everything’s gonna go to him for the next however many years. Even this record, I tried to make it cryptic enough with some of the songs and only really have three like, obvious baby songs, cause I don’t want to turn people away, like, “Ugh, she’s just writing baby music now.”

But of course you still want to be drawing from those personal experiences, and there’s nothing more personal than that.

Yeah, and I want to be honest with myself. Exactly.

To wrap things up, you were saying you don’t listen to a lot of other music while you’re writing, but the writing process for this record has been over for a while and we’re coming to the end of the year, so what’s some music that you’ve been really listening to this year?

Well, my husband really loves Dawes, so I’ve been listening to them a lot. They sound a lot like Jackson Brown, and they’re excellent songs. I always just go back to the standards — I love Paul Simon and Tom Petty and The Beatles and Leonard Cohen. And of course I always listen to my friends that put out new music.