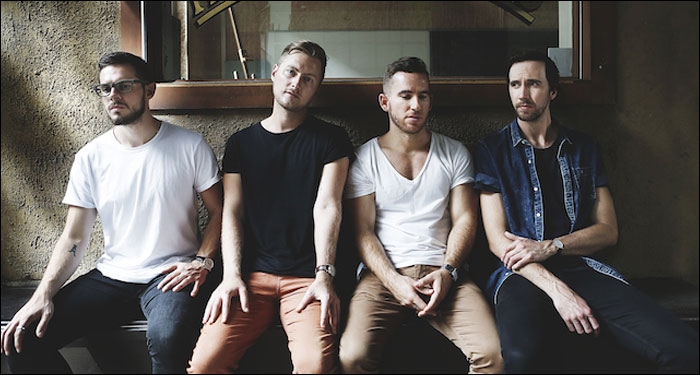 Australian alt-rock band New Empire are slowly yet steadily breaking out internationally. Their rÃ©sumÃ© already includes a stint on Warped Tour, and opening for bands such as Simple Plan and Neon Trees. They recently released their third full-length In A Breath on Tooth & Nail Records and will be embarking on an Australian headlining tour this month. The rest of their summer plans include heading stateside to open for Hawthorne Heights and The Red Jumpsuit Apparatus. idobi senior writer Catherine Yi caught up with guitarist Kyle Lane to discuss the new record, signing with a label, and finding success overseas.

Your new album In A Breath was released in April. How has the response been so far?

The response has been really good, actually. It’s been a while since we released anything so there was a lot of anticipation leading up to the album. For us, it was a case of trying to meet that expectation for people and so far, from what we’ve seen and what we’ve received, we’ve met that expectation. Which is good.

You guys started gaining traction with Symmetry a couple years ago, so with making this album, how was it dealing with the pressure of meeting and surpassing those expectations people had from the previous album?

It’s really interesting because we felt Symmetry was a transition-type album where we tried a few different styles and we realized what worked and what didn’t work quite as well. It was more of a transition into this next album. We all went through a lot of stuff in the writing of this new album, so it meant that this new record was really, really honest and personal. It was a chance to show everything that we had. So at the same time as there being a lot of expectations, we feel like we were meeting them in ourselves personally anyway, so it didn’t really feel like it was pressuring.

What did you guys do differently this time around compared to your previous records?

This record probably took us the longest to write. Like as soon as the last record was done, we started writing this new record. It’s been two years in the making. So it’s the longest we’ve done and we had so many experiences along the way in writing one record that it all was compiled into one big project. We just made everything so vast. The other thing that we did, we took our time a lot more in the recording. Usually you only have 2-3 months to smash out a record in the studio. This time, we just took our time. We took a year of just recording because we had a personal space that we could use. It was one of those things where we could try different things, erase stuff and start again, and some of those luxuries you don’t get with normal records.

This was your first record you guys released through a label. What made you guys decide to leave the full independent route and get some help with this one?

We’ve done the independent thing before, for a very long time now, so we just felt like we pushed it to its absolute limit, at least in Australia. We pushed to its absolute limit to which people would listen and people would hear from the promotion power we had on our own. So we just thought, why not try something new: Go with a label in the states, go with a label in Australia and just get all the help we can get. It’s really worked out that the labels we’ve gone with. The teams are so supportive and so interactive with us. It’s just been an absolute dream.

What made you decide to sign with Tooth & Nail for the US release?

We met the team over Skype and over phone calls and emails and that kind of thing. To be honest, they were the label that was the most excited about seeing us succeed in America. And for us, that’s exactly what we want. We didn’t want a label that was just gonna put us on the shelf or cookie-cut us into what they wanted us to become. Tooth & Nail just believed in us, believed in our music, and thought there was a place for that in the States and we just loved that.

Even before signing with Tooth & Nail, I know you guys have played some shows here, like with The Dangerous Summer and a couple dates on Warped. How did that whole process begin when you guys really started to break in overseas?

We decided to get a US manager and booking agent. So we just explored that option first and thought that our music was going to be even better received in the States than it has been in the past in Australia, not that it hasn’t been received well. We just thought the States had a lot more room for our kind of music. So we spoke to some managers and agents, people that were really excited about what we did, and then we just gave them a trial and said, “Put us on some shows and we’ll see how it goes.” It was a really simple process. We only found out a couple weeks before we went that we were actually going. It was like, “Oh ok, pack your bags, let’s go!” [laughs]. And we loved it. It was the best time of our lives.

We’re back in August until about mid- to the end of September, which will be fun. So we’ll do that tour and then hopefully we’ll do a little bit more in July in the States and maybe a little bit afterwards, but we’ll see how it goes.

I feel like a lot of people have the notion that when a band can successfully tour and support themselves in the US, it’s like they’ve finally made it. Why do you think that is?

I don’t know. It’s really funny because we see the back end of that and what making it actually entails and looks like. I mean, sure we’re touring in America and playing music, but when I’m home, it’s still like we all work jobs, trying to keep the cash flow going while we’re not touring. It’s just, I don’t know, the perception of being in a band to being on the outside and looking in, it’s just different. It’s hard to show people what you actually do and what you actually feel when you’re up on a stage and they’re on the ground watching you. It’s funny, the perception’s so different.

In Australia, people know our songs [laughs], is probably the biggest difference. People know what we play. You see people singing the words and we do our own headlining tours and that kind of thing. When we’re in the States it’s like completely brand new for 95% of the crowd. So both are really good. It’s really exciting to be able to come to a show in America, play, and 95% of the people haven’t heard you and they come up to you afterwards and are like, “Where have you guys been!” When we’re in Australia, people know your songs. It’s just different. I think both are awesome.

What do you guys try to incorporate in your live set so that a crowd where 95% of the people don’t know you can get into it and enjoy your set?

I think on our new record, we have a lot of kinda chanting moments where the chorus is quite simple but really effective lyrically and melodically. So we use those times to be able to teach people our songs so that when the next chorus comes around, they’re ready to sing it. I think it’s those kinds of choruses and those kinds of times in the set that are memorable for people. They go away and they’re singing the hook of those songs–those really melodic, chanty choruses. We like to really accentuate those choruses and get people involved in that way.

Do you think that actually being from Australia has been an advantage for you guys, because you’ve had the opportunity to open for well-known bands when they tour there, such as Simple Plan and Neon Trees, which a lot of bands in the US don’t get because there’s so many bands to fill those spots.

Yeah definitely. We don’t really consider our music punk in general, but we ended up just supporting a whole bunch of punk rock acts when they came to Australia. But that really just boosted who we were, and really boosted us more into the spotlight in Australia. So I think it has been really helpful to be in a country with less people than in the States, at least to start out with, to just build something and to build the fanbase, and build what we need to come to America and try ourselves out there. In America, when you start out as a small band, it’s very hard to go anywhere when there’s just so much variety and so much to choose from. So yeah, I definitely think it’s helped us.

What do you guys have planned for the rest of the year now?

Well, we tour in Australia in June, we do our own headlining tour and then July, August, we head to the States. We’re there until September, October it looks like. And then we’ll come back home, play a few shows, and then do another Australian tour to support a single. Then after that, we’d really love to get to the UK, then to Japan, and then back to the States as well. So pretty much, it’s just touring. It’s just touring and touring and touring as much as we possibly can.

Have you guys toured outside of the US or Australia before?

We did one tour in Malaysia, just a really quick stint there, and we do New Zealand about once a year as well. It’s just been mainly Australia and the States, but with this record we plan to hit as many continents as we possibly can.

Be sure to check out the New Empire’s latest record In A Breath and catch them live when they reach your continent.