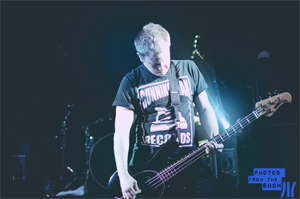 While on their current headlining tour, A Day To Remember’s Josh Woodard took a few minutes in Minneapolis to to idobi about the band’s success of their most recent album, touring the world, and crazy show antics.

idobi: How’s everything going? How’s the tour so far?

Josh Woodard: The tour is going awesome — I think we’re two weeks into it. Everything’s going well, and I actually think every date sold out until the west coast or something crazy like that.

It was nuts. Ridiculous. I can’t even explain it. It reminded us of our biggest show to date. As a headlining show. It was at the UK, in London, at this place called Brixton which is 5000 kids. That [Chicago the previous night] was like 4400 kids.

I can’t even imagine. You guys are touring with PTV, BMTH, and WCAR, and it seems like you are all good friends — how did you guys pick these guys for this tour?

When you go to pick a tour, you want to pick bands that help add to the draw — you know, help make the show as big and successful as possible. At the same time, we also like to tour with people that we know our fans are going to be into. I’m not going to name names, but there are some bands that we know would guarantee a sold out show, but we don’t want to help represent our band in that light at all. So, we also like to take into consideration what our fans will like. Thirdly, it’s always nice to tour with people you actually like, you know? So that’s kind of the way we did it with this tour. PTV and BMTH, we’ve known those dudes, and WCAR is an up and coming band that is killing it. It made sense.

What Separates Me From You came out in November. It went to number eleven on Billboard 200, number one rock album, and on and on. Would you have ever thought you’d be where you are today?

No. Flat out, no. It’s ridiculous. It’d be like if you started a band in your basement and then, you know, just a ways down the road ended up where we are now. It’s amazing.

You guys just spent a couple weeks in Europe, and played some of the biggest show’s you’ve ever played. I can imagine that was an awesome experience. I checked out some of Adam Elmakias’ pictures from your time in Europe and it looked absolutely nuts. Is there a big difference for you guys playing there versus playing here [the US]?

I mean, if you read it on paper, you wouldn’t see too much of a difference, because we’re playing comparable sizes and stuff. This is no diss to our American fans at all, but, let’s just get real. Like, you’re from a hometown that has a music scene, right?

If you didn’t come to see ADTR tonight, guaranteed within the next month, another band with the same likeness will be coming through on tour, you know what I mean? Over there, they don’t have that. There aren’t bands coming through every week. In my hometown, we had shows, like multiple ones, every week. It’s not like that over there, so I think they’re just more accepting, for one, and just more excited, I think. Because when a band’s coming over, they’re like, “Holy shit, it’s been like five months since I’ve seen this band.” 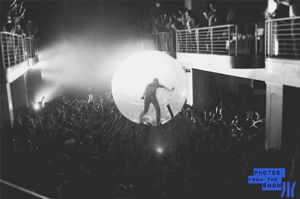 On this current tour, you guys have been putting on a crazy show. Toilet paper, confetti, putting Jeremy in a giant ball where he slowly suffocates…

Whose ideas are these?

Jeremy comes up with a bunch of them; he has a lot of crazy stuff. And then most of the time, it’s usually just us sitting like we are right now talking, just being like, what can we do to make our fans say, “Holy shit. I thought at a was at a rock show not…”

So you’ve got a while left on this tour, and then Bamboozle, Australia, Chile, Brazil, Argentina, correct? You’re really seeing the world, aren’t you?

Yeah, I think after South America, there aren’t too many places we haven’t been. It’s crazy.

So, as far as your summer plans, I don’t think they’ve been officially announced, but I think people know what you’re doing.

Can you talk about it?

I don’t think I’m allowed to say one hundred percent because they haven’t officially released it. But, I can let you know that we’re doing the coolest summer tour there is.

Yeah, it’s outdoors. I think we’re going to come to Minneapolis. Is that where it’s at?

Yeah, it’s here! If we’re talking about the same thing, of course.

Awesome, well that’s all I’ve got for you, thanks for taking time to talk with me. Good luck with everything.

Thanks for doing the interview man, we appreciate it.