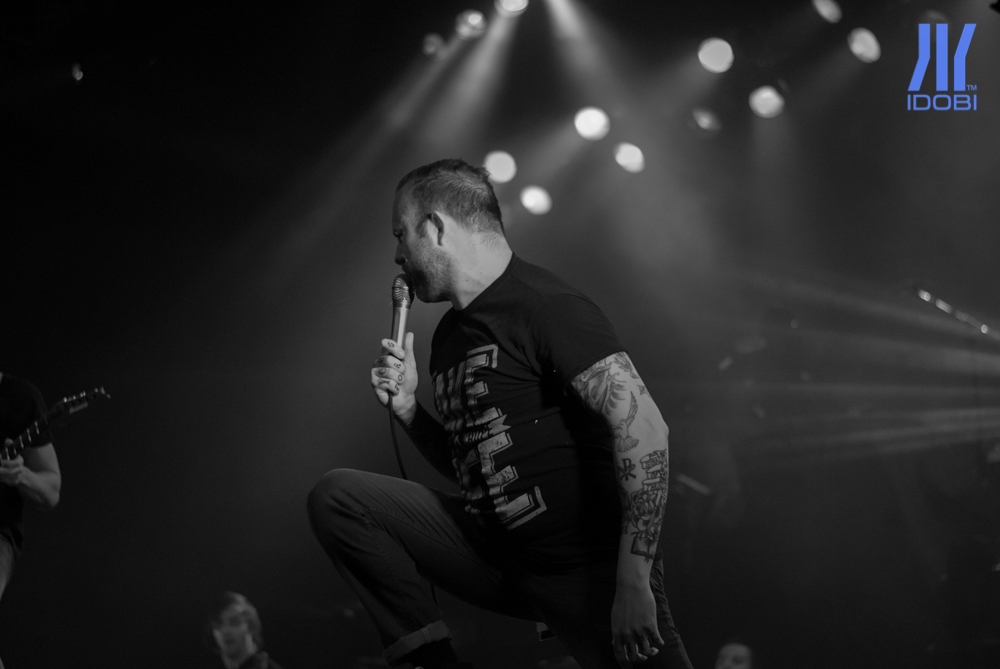 Metalcore legends August Burns Red are truly a force to be reckoned with. Their latest release, Rescue & Restore, pushed the band’s boundaries to whole new level to create an essential part of any metal fan’s catalogue. idobi writer Alex Rudisill spoke with vocalist Jake Luhrs on how the band progressed while writing their latest masterpiece.

Tell us a little bit about this tour you’re on right now.

We’re pretty much halfway through the tour at this point. It’s been really nice for us because we haven’t done main support for a band in a couple years. Just being able to be on tour with a some cool bands where we can play a shorter set, do the job, and get out of there. It’s a little more relaxing. Doing headlining tours, there’s a lot of pressure there making sure everything is set up and usually you’re working a lot harder and longer. This is kind of like almost a vacation for me. There’s been a lot of new fans we’ve been gaining. The tour package is very solid.

Rescue & Restore is your 5th album as a band, a record you’ve been touring on since Warped Tour this summer. How has it held up on the road?

It’s doing great. That record, its first week, was #9 on the Top 10 Billboards. That had never happened to us, being in the top 10. That was really a good sign for us because that meant we put something out that our fans really desired. We plan on writing for a new album towards the end of this year. This one, in my opinion, is something I’m very proud of. We put a lot of hard work and energy into it, and it’s a great record and addition to our discography. It’s definitely paid off.

Did you grow personally as a musician while writing this album?

I did. I spent over 100 hours in the studio just working on the vocals and the lyrics. I even went to a cabin in Vermont, spent a week there just to get away from everybody and really focus on the writing process. It was a very humbling experience because a lot of things happened that I thought I had control over or where I wanted to go in one direction and it didn’t pan out that way.

This was a completely new writing process for you?

Usually, you spend about 8 hours a day for 7 days, basically 2 songs a day, on vocals, which is kind of the standard in recording vocals. Basically, I’d spent an entire month going to the studio every day with my vocal producer. Doing the cabin for a week was definitely something I’d never done before, which I thought was was nice and relaxing. For me, I just need to put myself in the position of understanding the severity of this process, and if I can get my mind to focus on that moment and see this is something I really need to dedicate all my time to, usually I end up getting the job done, rather than a little bit of work here and there.

This record incorporated instruments like the violin, trumpet, and cello. Do you think you’ll continue to experiment with new instruments in later albums?

Definitely. I think that was something we really wanted to add even before this record – we just didn’t really understand how to. So we had to grow into that as musicians and understand the way to introduce them and find the right people to play them. JB [Brubaker, guitar] is the magic behind the curtain. He really knows how to formulate songs and structure them properly. We’ll continue to add as much as we can to the next album.

You guys recently completed the Soundwave festival in Australia. How do festivals compare to venue shows for you guys?

I think they both have their pros and cons. Big festivals are cool because you have a big stage; you can run around and do all these crazy things. You have a huge audience which can be fun. At the same time, it’s not as personal or intimate. I think smaller venues, even venues in general, have their own characteristics and personalities and you tend to understand what you’re getting into. Festivals, however, if you’re not a repeat musician who plays those festivals, you never know what’s gonna happen.

Your band is considered a forerunner of your genre with many of these younger bands looking up to you. Has the face of the music changed since you guys started?

Drastically. I don’t want to say the music has changed drastically because it hasn’t, which is the problem. The mentality towards the music has changed drastically. When it first started, I think there was an understanding that it was something very very precious and important, and it was taken very seriously. It was a new avenue to experience emotion in the music scene. So when this genre was really starting to grow, a lot of artists really wanted to be a part of it. Now I feel like there’s a lot of replication, where everybody is mimicking one another and not really being musicians in a band, they’re just being band guys. That’s the problem right now that the genre is dealing with. Other artists and bands that are a part of this are currently struggling with a dry well because instead of everyone just being themselves, they’re trying to just mimic the genre itself. Maybe that’s why we look outside of what’s going on here and try to draw inspiration and influence from other genres of music or instruments, like the sitar, cello, piano, and trumpet, things you wouldn’t see here.

Your fall headliner was a very mixed package, with Blessthefall, Defeater, and Beartooth. Are you in favor of these mixed tours?

With that tour package, we booked those bands because they’re our friends. That’s one of the cool things you can do with headlining tours, you can basically pick who you want. On the other side of that, we are fans of mixed up tour packages. I think it can be very boring hearing the same music. Like I said earlier with everyone in this genre replicating each other, the boredom just continues. Mixing it up gives our fans the opportunity to broaden their horizons with new music and it gives those bands that we’re on tour with, or who we pick, to gain more fans. It’s really more of a better playing field for both the fans and the musician themselves.

Do you think bands are only as good as their live show?

I don’t think so because the musicianship is heard within the song. You can’t say to a musician, “You wrote a beautiful song, but you can’t play it live in front of a crowd,” or, “Your showmanship is lacking, therefore you’re not a good band.” I think with any band, you could say one or the other. You could say, “This band uses too many samples in their live shows because they can’t play their parts,” or just in general, “Your band sucks,” whether it’s recorded or live. There’s plenty of bands out there that are tearing the stage up, then you listen to their record and think it’s pitiful – but they can be great performers and showmen.

What does August Burns Red have in store for 2014?

We’re finishing up this tour and doing some festivals in the summer. Can’t really tell you what we’re doing towards the end, but there’s definitely been some really big things happening behind the scenes, even just this week, that put a lot of smiles on all of our faces.