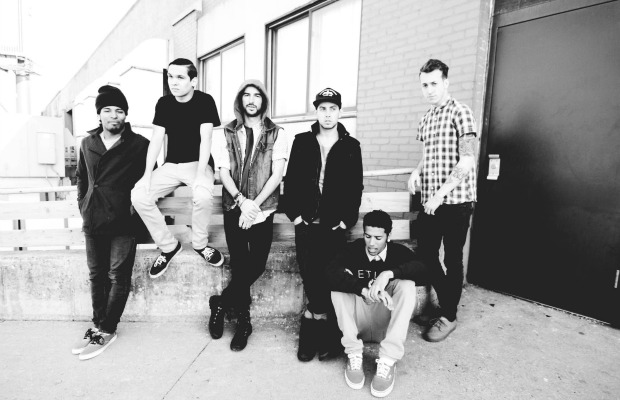 It hasn’t even been a year yet since they formed, and Issues have already achieved massive success with their debut EP  Black Diamonds.  They’ve been on the road since the beginning of the year and are currently opening for A Day To Remember on their national tour. idobi writer Catherine Yi caught up with vocalist Tyler Carter at the Los Angeles stop to discuss the constant touring, their success so far, and what Issues have in store for 2013, as well as the future in general.

So you guys have been on tour with A Day to Remember for about a month. How’s it been so far?

It’s been crazy, like these shows are all sold out. They’re really big, and I’ve toured for a while, but the biggest tour I’ve ever played before this was Warped Tour or the We Came As Romans tour a couple years ago, but this is even bigger so the response has been insane.

You guys missed the Vegas stop last night. What happened?

So upset about that. Basically we broke down in the middle of bumfuck nowhere, about 45 minutes outside of a town where we had stopped for gas. This is like 8 in the morning and we broke down and there was nothing for miles and miles. We couldn’t start the bus at all and the belt or alternator broke. I mean, I’m not a mechanic, but we were fucked. We had somebody come out to work on it and two hours turned into seven hours turned into nine or ten hours. We didn’t get towed until eleven at night and there was no way for us to get to Vegas, especially with all our gear. We were really upset about it and I know a lot of fans were pissed, but literally nothing you can do in a situation like that but try to pass the time. Shout out to the fans that brought us Del Taco and water bottles because we had nothing – we were out there starving. I tweeted if anybody was close and somebody thirty miles back brought us some food, so we got lucky.

You guys have been doing a lot of touring lately, like opening for Silverstein and Pierce the Veil. How is it stepping away from a band that was capable of headlining and now going back to opening again?

It’s crazy. I wouldn’t say I’ve ever felt like I was capable or ready to headline, whether or not people believe in us or mean that much. With Issues, people keep asking us like, “Why aren’t you headlining,” like there’s a seniority. It’s a scary thought to even be a headliner because there’s so much responsibility, and it’s like, you know you have fans but can you really pull a crowd? Can you really draw a shit ton of people? So it does get scary when people ask us to headline or like promoters want us to come do these shows. We do test runs every now and then, starting at like 500 capacity rooms, and being able to sell out, even with a 500 cap. room, is so surprising.

You guys just announced a co-headliner in the UK, right?

Yeah, it’s with Crown the Empire. We actually originally wanted to do the US and UK and certain Canadian states with them. We thought it’d be cool just because it would almost be considered a world tour. There are obviously other tours being planned and other things conflicting, but it’s going to be fun to go over to the UK. I’ve never been.

Not even with Woe, Is Me?

No, I quit right before they went, so I’m excited. The whole band’s really excited to be headlining over there, so it’ll be more like a fun vacation to get to see fans and stuff.

You guys only have one EP out right now, so how do you intend to fill out a headlining set when you’re over there?

We’re recording our full-length before we go. We’re writing all summer and then we’re doing a little bit of Warped Tour at the end of the summer. Before we head out to the UK we’re going to be recording the full-length, although we don’t know exactly with who yet. It isn’t fully written, but by then we’ll have a bigger set for sure.

What kind of work have you started on the full-length so far?

We’ve written a few songs. We’ve definitely got a ton of ideas and a ton of concepts already mapped out – it’s just a matter of getting off tour so we can really set up in our garage, where it all started, and crack down on compositions.

Are you guys doing anything different this time, as compared to the EP?

I mean, that’s kind of a secret. We definitely have some really crazy ideas and next level stuff that we want to do. It’ll be relative to the EP – that was just a taste – but it’ll definitely be a step in the right direction so I’m excited for sure.

Can you describe how your songwriting process normally goes?

It’s really weird because it’s always a little different. Sometimes I’ll get an idea for a song and Ty [DJ], AJ [guitar], and I will sit together and I’ll literally make noises with my mouth like, I want the guitar to do this, or an idea of a structure like I want it to do this or that. Sometimes Ty or AJ will write some crazy song by themselves and I just write over it. Sometimes Ty and I will write a pop song and then we’ll get the ideas for the hooks and stuff and then write full band production. So there’s a lot of different ways we try to do it, but it all comes down to the three of us just getting extremely creative and getting to work.

What music have you guys been listening to recently that you think will influence the album?

You guys have stated before that you like to blend hardcore and metalcore with Top 40 influences, and it’s a pretty unique combination, so where do you see this band going in the future?

I mean, I see what I want. What I want is for the band to just be as big as possible and touch as many people’s lives as possible. We want to make changes and affect people but we definitely want to be able to go to like fuckin’ Scandinavia and sell out an arena. We want to go all over the world and just do big things. Growing up as a kid, all you ever want to do is live to the fullest and a lot of people lose sight of that growing up. We’re adults and we’re in a band, but the dream’s still like we’re a bunch of hooligans and we want to see the world and do crazy shit.

Speaking of “Hooligans,” you’ve been playing that song live for a month or so. Is it going to be on the next album?

Probably not, honestly. It’s a very West Coast pop feel mixed with some traditional hardcore and metalcore, but we’re probably just going to drop that as a single with a music video on iTunes. We have some really cool visions for that one, though. We wanted to pay ode to LA and Pasadena because that’s where the band developed, in a little garage in Pasadena. I flew out from Atlanta and I said, “Let’s do this.” This is where it all birthed so we wanted to pay tribute to that.

So I’m assuming “Hooligans” will be released sometime soon then.

Yeah, hopefully in the next month or so. Little bit of exclusive information: we’re putting out another EP on iTunes and Best Buy. It’s called Diamond Dreams and it’s basically a re-imagination of our first EP. We want to go ahead and get the soft side shit out of the way now and give people something to vibe out on while we take the time to really put a lot into our record.

And when do you expect the full-length to be released?

Hopefully the same time next year as our first record, so maybe November or sometime in the fall for sure.

Last month you guys brought up a 12-year-old boy to sing with you. How did that come about?

Oh, Will Ebeling. He is like the official adopted little bro of Issues. He’s this amazing YouTube kid. He’s just a kid, likes to scream. His brothers play instruments and they have like a little band. But he’s just really good, beyond his years, and I think he’s going to be a big deal one day so Michael and I took it upon ourselves and dubbed him little brother of Issues. He comes out and hangs when we play there, and he did a cover of “King of Amarillo” so we brought him up on stage to do it live.

With all the touring going on and everything, this should be a big year for Issues. How do you see your solo career fitting into all of this?

It’s definitely not on hold – it’s just a matter of getting my record flawless. We’ve been toying with the mixes and just getting it spot on, the way we want it, before we drop it. I’ve been working on it for a long time so I definitely don’t want to put it out half-assed or anything. So it’s just a matter of getting it done I guess. It’s hard because I’m on tour with Issues and just a lot going on in life.

Do you see your solo album coming out this year?

Anything else to say to the fans?

Just shout out to the fans. Thanks for all the support. You guys run this for us so we love you and continue to keep being hooligans.