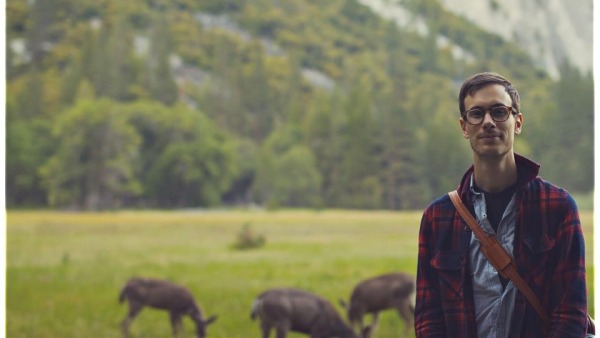 idobi had the chance to sit down with Forrest Kline of Hellogoodbye at a one-off show in New York City on November 29th. Kline talked about the band’s change in sound, signing to Old Friends Records, and future plans.

Tonight is the band’s first show in a little while. How does it feel to head back into things and start an album cycle again?

It’s great. We haven’t quite started the cycle yet, this is more of like a pre-show. Basically we’re smack dab in the middle of recording. We had a college show, so we decided to make a little thing of it. Hang out and play a show in New York, so it’s kind of a little special thing, which is more neat.

You just signed with Old Friends Records, which is an imprint of Fearless Records. How did that come about? Were you friends with the people at the label for a long time?

Just like I used to work at Drive-Thru records and then Hellogoodbye signed there, I used to work at Fearless Records too.   I’ve known them since high school basically and they’re really nice people, so it sort of just happened.

And you’re the first band on the label. Do you feel like you’re entering a new territory by signing to somewhere just starting up?

It’s nice to be able to set the tone. We’ll be the first to show how the label is seen and the vibe of it. In a way it’s kind of like getting to start our own label, but we don’t have to.

You worked independently for the last record and it did really well. Was it always your intention to sign to a label again or did this just spring up on you?

During the whole process of the last record we went back and forth on whether to do it with a label or by ourselves. Obviously we went with releasing it ourselves and it succeeded. There’s a glass ceiling to it though, like I only have so much money in my bank account. Going to a label is a whole other side of a coin. One’s not better than the other, really.

The label is actually re-releasing Would It Kill You? with bonus tracks and then you’re releasing a Daytrotter split with Lissie. Is it going to be the same tracks on those two or different?

The ones that are coming out with the record are actually a couple different things. Later this month we’re going to have a party where we’re going to do the record live and acoustic, so that’s going to be on there.  The Daytrotter tracks on the album are live from the shows that they taped and the ones on the split are from an in-studio session.

You’re no stranger to changes in sound and Hellogoodbye has definitely been through an evolution since it started. What’s the sound like on this upcoming record?

I used to make a song and start out with a drum beat, get a groove, a cool rhythm and then flesh it out and make some music over it. On the last record things happened more organically, just write a song on an acoustic guitar and figure out the rhythm later. This record is kind of back to more rhythmically-based music. It’s kind of dancey because I love shaking the groove.

The band has seen its fair share of line-up changes, so was the writing process collaborative or was it just you?

It’s generally just me, alone in a room looping things and freaking out. There were a couple of things that were collaborative. On the last record there was one song that we wrote together.

And when are we expecting a release of the record and what are your plans after that?

The first half of the year and then we’ll figuring out touring plans, but nothing’s set yet.