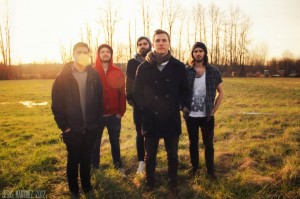 idobi caught up with singer Joey V. of From Indian Lakes at the New York City stop of their tour with The Dangerous Summer. He told us about life on the road, the difference in music across the coasts, and some exciting things happening for the band in the fall.

It seems like the band has been touring non-stop this year. You did the tour with NGHBRS, some headline shows, and now you’re on this tour with The Dangerous Summer. How has life on the road been?

It’s awesome. We’ve been on tour the past month and a half with The Rocketboys and we were on a short little tour with Brick + Mortar. This tour just started, but last night was huge and tonight should be huge too so I’d say it’s going pretty well.

Since you’ve been touring so much, have you noticed a greater reaction to your set?

Definitely. We were just talking about how we were in Houston and the first time we ever went there it was decent. And now the last time we went there the place was packed where everyone knew who we were and there was a really good response. There have been a lot of shows like that which is cool because up to this point we’ve done everything independently.

You released The Man With Wooden Legs in 2009 and then an acoustic EP in 2011. When will we be hearing new music from you guys?

Yeah, it’s been a while. We’ll hopefully have something released in October and then more new music early next year. We’re just trying to get all the label stuff worked out right now.

So you are in talks with a label or you will be continuing to do everything independently?

We’re actually signing to a label here in New York. That stuff should finish up this week and then there will be an announcement soon.

Speaking of New York, with From Indian Lakes being from California, do you see a strong difference in the music scenes and how music is perceived on each coast?

Yeah, it’s pretty different actually. I mean we’re from the mountains so I like stuff that has this raw kind of twang to it. But when we play in Hollywood or Vegas we do pretty well there because the kids are just sick of a lot of the gross, fake stuff that surrounds them. On the east coast people seem more into that almost hard, experimental rock sound like The Dear Hunter, but on the west coast a lot of music is more pop-based.

Your album is pretty diverse itself. When you go into writing do you do it with a set type of sound in mind or is it just whatever comes naturally?

The next record is actually more diverse, so we’re pretty excited about that. I don’t think it matters what kind of song it is as long as it feels right. When we were tracking the record there were people like, “Oh, maybe you should start a side project because some of these songs are so different.” I think you should leave your audience not expecting what you’re going to do next instead of putting yourself in a tiny room. You should do whatever you want. I think that as long as what we do still has that raw, natural approach with an honest sound then people will still get behind it and listen.

What’s next for you guys? Are you going to just keep on touring or take some time off?

Well, we finished our record, so we’re just going to keep touring. We have this tour now which is pretty big for us.

Is this the biggest tour the band has done?

Yep. We’ve done tours before with big stages and catering, but we’ve never done one where there are hundreds of kids who are just stoked to be at a show. The Dangerous Summer just have this huge support from their fans, like people are really passionate about them so it’s nice to be around that and not just people hanging out.  The next tour we’re trying to do is supposed to be as big as or bigger than this, so we’re just going to continue being support on tours.

So you could say things are really starting to take off for the band.

We’re trying. I think that just saying no for so long and doing things independently and working so hard is really coming together. I think a lot of people decided putting out a lot of music is the way to do things, but if you can tour and it’s working where you’re not going broke and there is still that quality of music, then it pays to wait sometimes. So that’s where we’re at right now.

From Indian Lakes are currently on tour across America with The Dangerous Summer. Check out the dates and the band’s music on their Facebook.