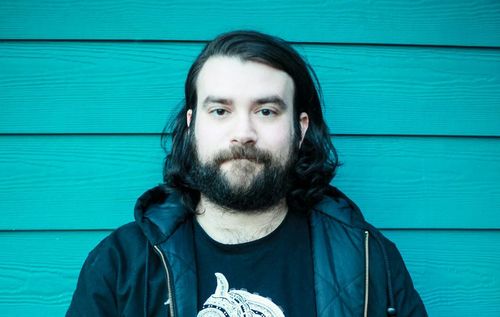 If you’re already a fan of David Bello’s solo music, or maybe lean towards to the more mellow sounds of The World Is A Beautiful Place & I Am No Longer Afraid To Die, you’ve come to the right place. Bello, better known as the vocalist for TWIABP, recently spoke with us about his solo work, balancing numerous projects, and what it’s like to make music solo vs. with a large and revolving cast of members. His new EP, Tires, is now available via Man of 1000 Masks. To tide you over until you grab the EP, you can listen to his new song “Burn Up In A Car,” which Brooklyn Vegan describes as “acoustic campfire emo.” So, turn it up, roast some marshmallows and read below to get inside the mind of David Bello.

How did you first decide you wanted to be a musician?
When I was ten, my dad found a guitar in someone else’s trash on the side of the road and gave it to me. I was really into Smashing Pumpkins and Green Day at the time, so I started trying to learn their songs. Before that, I watched my cousin Ricky and my Uncle Dave playing guitar whenever my extended family would get together.

What made you choose to start a solo project?
When I was in high school I didn’t have a lot of friends who were into the same weird music I liked, and Parkersburg, WV was a very small town. I basically figured out how to record on my own, so solo work was all I even knew for a lot of years.

How would you describe your upcoming EP, Tires?
If you’re familiar with my old solo material, it’s a continuation of where my last record, Landlord’s Dance, was heading. A lot of the songs are one’s I’ve been playing and tweaking for years. It’s a taste of what’s to come. I plan on recording a lot more in the future, and hopefully it’s a good introduction for people who are only finding out about my solo work by my connection to TWIABP.

What are some of your inspirations, and how do you see them manifest in your music?
Xiu Xiu, Neil Young, and The Afghan Whigs are the influences I hear the most when I listen back to my own recordings, but I listen to a huge variety of things. I’m inspired by my friends’ bands more than anything.

What’s it like to work alone as opposed to in The World Is A Beautiful Place…, a band notorious for having a revolving cast of members?
With TWIABP, everyone contributes and critiques each other constantly. That’s how our group works best. No one is orchestrating over any one piece. When I do things on my own, I very rarely even have others contributing performances, let alone writing or overseeing any element of the production. It’s very much my own project with my own ideas as the substance.

If you had to choose a ridiculously long name for your solo project (a la TWIABP) what would it be?
I would never do that, but if I had to, it would be adapted from the comic Achewood that came out shortly after Michael Jackson died: “The Private Lie that Someday you will be Young once Again, and Feel at Capricious Intervals the Weightlessness of a Joy that is Unchecked by the Injuries of Experience and Failure.” That, or “Sandra Bullshit.”

What are some of your favorite things outside of playing /creating music?
I love cheap alcohol, cheap food, and news bloopers.

How do you plan on balancing both your solo project and TWIABP along with anything else on your plate?
I can start and stop my solo work whenever I need to, so I can be continuously working on it whenever we aren’t touring. I’d love to tour for my solo project, but TWIABP has priority for my schedule because way more people enjoy that band.

If you weren’t a musician, what do you think you’d be doing instead?
I would be transcribing college classes for the deaf and/or hard of hearing. That’s what I did before quitting my life and joining TWIABP. It was going well, and I still try to do it when my schedule allows and I can be of use.

What does the future hold in terms of all your musical endeavors?
TWIABP will be touring with mewithoutyou this summer. We also have a record coming out on Broken World Media this Fall called Between Bodies. We’re doing another full US tour this Fall, and hopefully next year going to some countries we haven’t been to yet. I’m starting to record for a full length solo album. In the meantime, all of my other solo stuff is available at http://davidfbello.bandcamp.com

Thank you for your time!

David Bello’s new EP is now available to stream for free over at his Bandcamp page. If/when you fall in love with it, head here to order the vinyl 7” to spin as your summer nights’ soundtrack.

Tags: David Bello, The World is a Beautiful Place & I Am No Longer Afraid to Die