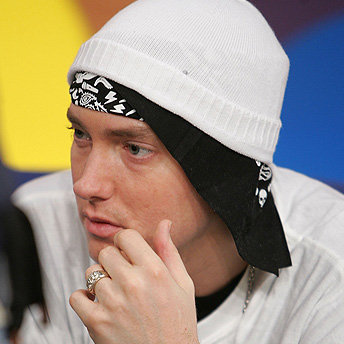 Recording artists may be set to receive a boost in royalty revenues from digital music sales, at least if Eminem has his way.

If the jury sides with F.B.T. Productions, this trial could serve as a landmark case that finds hundreds of millions of dollars in digital royalties being shifted from the already-struggling record companies to the pockets of the artists themselves. Eminem sued Universal over how much he felt he was entitled to after UMG sold his music to other services like iTunes and phone companies that sell ringtones.

“This is very significant case,” entertaiment lawyer Jay Cooper told the Wrap, “A lot of people are going to be watching very closely because there’s a lot of money involved.”

At the heart of the case is whether digital downloads represent a distribution deal or a licensing agreement. If the jury feels that downloads fall under the umbrella of a distribution deal, thus agreeing with UMG’s take, the artist will continue to receive their usual royalties. However, if its considered a licensing deal, which usually finds the label and artist splitting the royalties 50-50, then Eminem and countless other artists may find their digital revenues more than doubling.

While Eminem’s publishing company is only seeking around $1.3 million in unpaid royalties, the repercussions of the trial might be felt throughout the industry. Interestingly enough, the main defendant in the F.B.T. Productions’ suit is Aftermath Records, Eminem’s own label under his UMG deal.

The Slim Shady’s forthcoming album “Relapse” is set to drop some time this year.