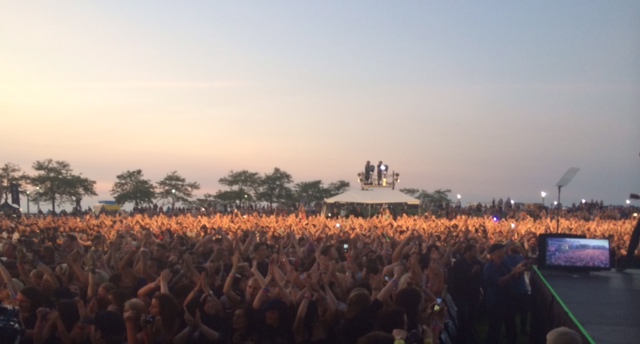 The sun is setting behind Cleveland’s Rock and Roll Hall of Fame. The crowd is rumbling with elated impatience. Crew members rush on and off stage, making sure everything is in place and functioning. Band members and industry professionals buzz around, ready to take their place in the spotlight when the time comes. The event will start soon, and the nervous excitement that fills the air is intoxicating.

Contemporary Youth Orchestra members Lauren Hawkes,  Jacob Duber, and Aviva Klein have spent hours rehearsing  for this day, and as Brendon Urie grabs the microphone,  they watch as it all begins  to pay off. Opening the show with  Urie’s renditions of Sinatra classics  means starting with  some of the best songs of the evening to members  like  Klein, and as the Panic! At The Disco frontman belts the  lines, hopes are  held high that he doesn’t forget the words like  he did in rehearsal. Crossed fingers work their magic,  and the intro goes off without a hitch. Now, the  show has begun. 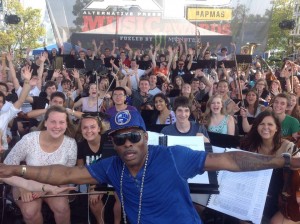 Center stage gives a perfect view of everything going on across the venue and at the conductor’s podium, where acts like Fall Out Boy and Joan Jett stop to greet conductor Liza Grossman. Klein remembers, “Coolio got on the podium with Liza’s baton and conducted us… Artists who were performing got on the podium, or shook hands with Liza, as Fall Out Boy did.” 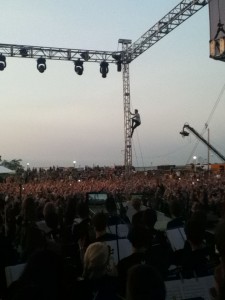 They’re also in prime placement to get down with Falling In Reverse, Coolio, and Tyler Carter for their rendition of “Gangsta’s Paradise”, and stare in equal parts amazement and fear as twenty one pilots’ Tyler Joseph mounts the stage structure and climbs to the top during the duo’s performance. 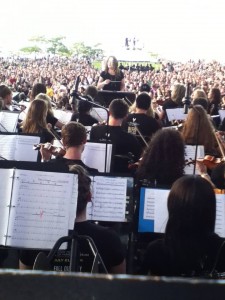 Throughout the night, the orchestra provides a steady soundtrack, while friends watch in the crowd and waves are exchanged with members of Misfits, who met the CYO kids earlier that day. Duber’s starstruck moment came from the legendary band before hitting the stage. “I’m a big fan of Misfits, and they were there. Jerry Only, the bassist, was hanging out backstage… He was probably the nicest guy I’ve ever met.”

Monster Energy cans, surprisingly filled with water, are downed to refuel for dancing in between songs. If you look closely, you’ll notice that the group behind the symphonic instruments might be having more fun than anyone else there. Behind backdrops, however, bands are getting ready for their performances, and once they lift, they’re back to business. The kids take to their craft and put out song after impeccable song, even if members like Hawkes might be unsure of the outcome. “Fall Out Boy were actually amazing… we didn’t rehearse with them either, so we had no idea what was gonna happen, and it went perfectly.” 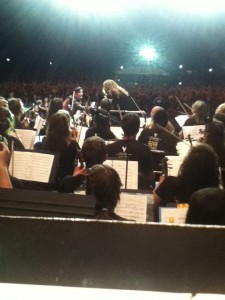 After all the awards are given to their very first owners, and the final notes are played by the last featured performer, it’s time to wrap things up in a grand way. The end of each Contemporary Youth Orchestra rock performance finds them playing a piece titled “Chameleon”, and the Alternative Press Music Awards is no exception. The song brings everyone to their feet once more as the show closes out, as Klein describes. “Soon, everyone was up from their seats, dancing and reveling in the post-concert high, and I knew I was home.”

Cars pull away from tour buses, bands relay their praise for the orchestra (“We heard that [twenty one pilots] really liked us and that they probably wanted to do a show with us,” Hawkes recalls) and social media hype is checked while CYO members chat with friends about the surreal memories they just made.

The Alternative Press Music Awards were “a pretty amazing experience…,” Klein says. “I was very pleased to be on stage, rather than in the audience. It was one of those moments that you know is right.” This year, the event will be just as profound for the Contemporary Youth Orchestra. They’ll be back again with new members and more experience, ready to play with the most influential musicians of our scene. Make sure you join the crowd, tune in, or watch from home when the organization gets back to doing what they do best on July 22nd!