We had great expectations for Psycroptic when “Echoes to Come” was released as a single November 2014. Then again,  Psycroptic‘s self titled is their second full length since 2008 (sixth overall). Fans are accustomed to waiting for the Tasmanian death prog quartet, and they were awarded again in 2015.

Perhaps there is broader commentary to be made about the music industry, or metal specifically. The two year full length album cycle is a costly grind in this genre. Moonspell released four albums from 1995 to 1999 but Extinct is their second since Night Eternal in 2008. One should also consider the possibility that 20 years of playing music takes a tremendous physical toll.  As for the album itself, Extinct further tightens Moonspell’s grip on the gothic melodic death metal niche (see what we’re talking about here). This record leans more hard rock than recent releases but it might take us a few weeks to decide if that’s a bad thing.

Howl tries to maintain a worldwide perspective on metal, which is why we’re so excited about Melechesh, the first “Mizrahi metal” band on our featured playlist. For the metal layman, it’s a lot like Sumerian black metal. Just check it out.

Shattered Sun debuts on Howl this week one month ahead of the Hope Within Hatred release date. We also made room for older releases by Hatebreed and Upon A Burning Body in honor of South By So What this weekend in Dallas, roughly the same time as some other big Texas fest we either can’t remember or we’re too lazy to research. 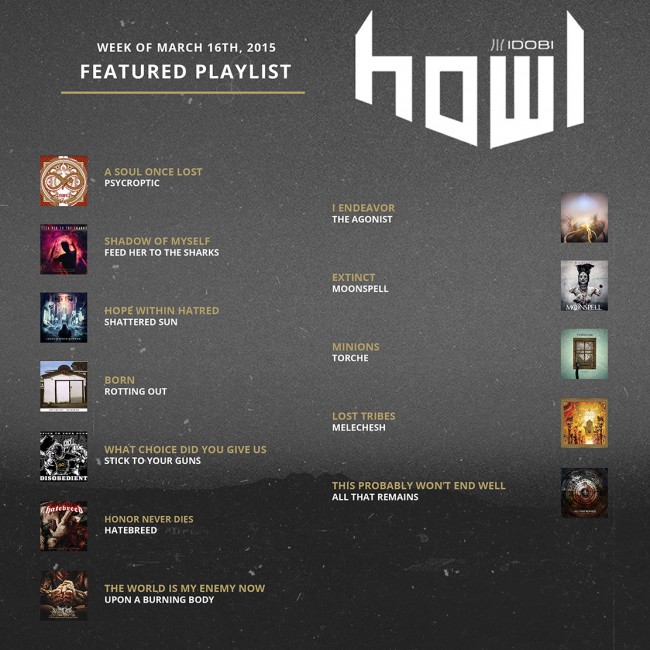 Tags: All That Remains, Feed Her To The Sharks, Hatebreed, Melechesh, Moonspell, Psycroptic, Rotting Out, Shattered Sun, stick to your guns, The Agonist, Torche, Upon A Burning Body