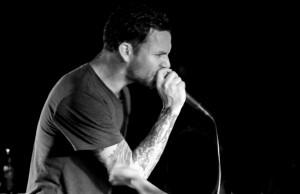 I Am The Avalanche are currently on a run with support from Hostage Calm and Banquets, celebrating the release of their latest album, Avalanche United. Fans in central New York got their chance to catch the tour at the Lost Horizon in Syracuse on Sunday, March 18. The band were returning for the first time since May and their loyal fan base did not pass up the opportunity to see them again.

Doors opened early in the evening and the venue was mostly vacant as Banquets took the stage after a few local acts. The few fans who made it in early appeared to enjoy Banquets’ melodic punk, which was reminiscent of I Am the Avalanche themselves. Thus, Banquets were the perfect warm-up act for this tour, earning the allegiance of new fans and starting the night off right.

The fans who streamed into the Lost Horizon after Banquets’ set ended were just in time for Hostage Calm to claim the stage. While this was most of the crowd’s first experience with Hostage Calm, there were a few devoted fans scattered throughout the crowd, belting each word along with singer Chris Martin. The entire crowd warmed up after a few songs and began to form circle pits and scream enthusiastically in support of the political subjects the band discussed between songs. After playing fan favorites such as “The M Word,” “A Mistrust Earned,” and “War On A Feeling,” Hostage Calm’s set was over and the now-packed venue was swarming with intense anticipation for the headlining act.

I Am The Avalanche took to the stage with the first song off of Avalanche United, “Holy Fuck,” and it was immediately obvious that this set would be a classic punk rock interactive crowd experience, not just a concert. Within seconds, the crowd was split, with half of the fans stable on the ground and the other half crowd surfing towards the stage, many eager to share the mic with Caruana for a few seconds. Between new songs, the band played every song off their debut that a fan could want to hear, from “I Took A Beating” and “Dead And Gone” to “This Is Dungeon Music.”

Caruana’s aggressive banter between songs sent the crowd almost as wild as the music did. As the band launched into “Gravedigger’s Argument,” Caruana shouted, “This next song isn’t about me wanting to kill my ex.” After the band all but blew up the stage, he finished the line–”It’s just about how I don’t want her alive on planet Earth anymore.”

After stopping mid-song to take celebratory shots, IATA announced their final song as “Brooklyn Dodgers” and the crowd’s energy exploded yet again. When the band finished playing the vivacious anthem, it was clear that nobody was going home early. After being asked to choose their own encore, the crowd was split between screaming for “Wasted” and “You’ve Got Spiders,” so the band decided to play both. Sandwiched between the two, they covered Lifetime’s “Turnpike Gates.”

The momentum that had built up throughout the night simply could not die as exuberant fans streamed out of the venue amid chants of “Avalanche United!” The opening acts were perfect in getting the crowd revved up for the raucous I Am The Avalanche experience. As they always do, IATA delivered an unforgettable show and promised to return to Syracuse, one of their favorite cities, very soon.

Tags: Banquets, Concert Review, Hostage Calm, I Am The Avalanche