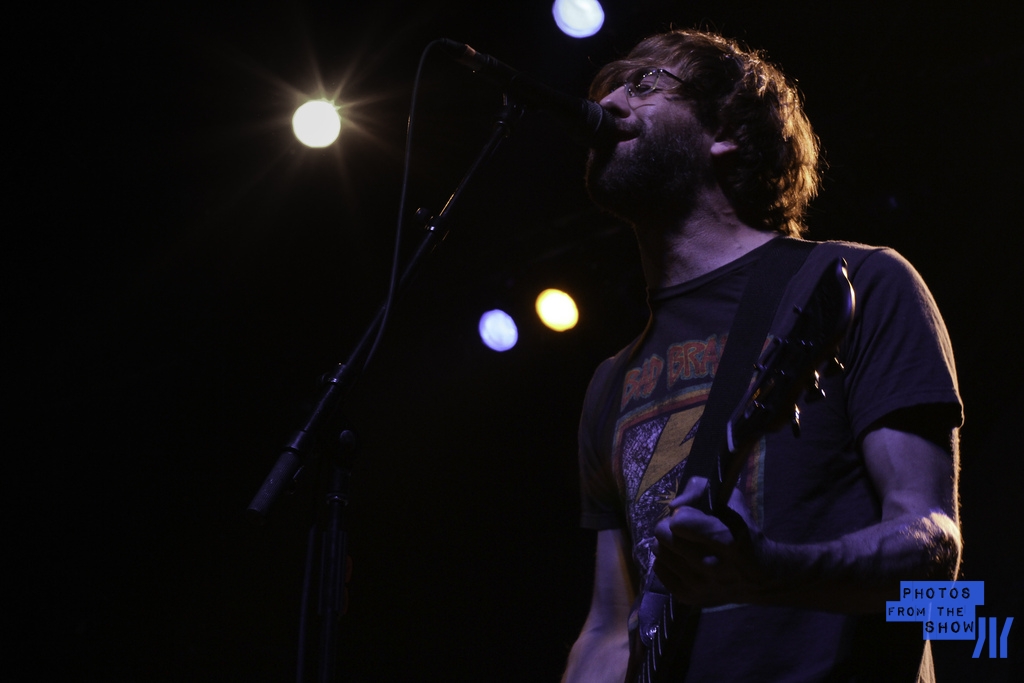 Anyone who had been to the Danforth Music Hall to see a symphony would have been shocked to walk into the venue on Tuesday night and discover moshpits in place of the usual aisled seats. Gainesville, FL punk rock veterans Hot Water Music and their supporting cast, La Dispute and The Menzingers, gave audiences a reason to stay on their feet when they visited Toronto last week on their winter tour.

The cold Canadian air outside may have been blistering, but inside the venue was a different story. The Menzingers were turning the temperature up with the help of a small but impassioned group of fans pumping their fists and singing along to every word of their set. Kicking things off with “Good Things,” the opener to their critically-acclaimed 2012 album On The Impossible Past, they quickly set the bar high for the rest of the night with a clean and energetic performance. With their brand of melodic, emotionally-charged punk rock, the band has a big sound that they haven’t quite grown into yet; they almost seemed surprised to find themselves on such a large stage, looking like they might be more comfortable rocking out a 300-cap club. However, solid performances of material from the new album and a few tracks from their sophomore release Chamberlain Waits proved that the band has earned their place on the big stage and might want to get used to the extra jumping space.

While The Menzingers’ performance kept things upbeat, the tone changed from the moment La Dispute began playing. Opening with “The Most Beautiful Bitter Fruit,” the crowd almost overpowered vocalist Jordan Dreyer as they shouted along to his every word, bodies slamming together in time to the song’s pulsing rhythm. And that was only the beginning — the crowd didn’t slow down for a second for the rest of the set, leaping onto one another’s shoulders and screaming their lungs out to songs from 2011’s Wildlife and one of the tracks from the band’s split EP with Touche Amore, “Why It Scares Me.” But it was the three songs from the band’s breakout full-length Somewhere at the Bottom of the River Between Vega and Altair that made the crowd lose their minds the most. Back-to-back performances of “New Storms For Older Lovers” and “Said the King to the River” had audience members falling over each other (literally), while fans were even singing along to the guitar lines in “Andria.” The emotional power of the band’s performance reached an all-time high with closing track “King Park” — one of the most intense songs the band has ever written. With lyrics based on the true story of a drive-by shooting in the band’s hometown, Dreyer left absolutely everything on the stage with this song, pouring every last ounce of emotion into screaming the song’s closing lines before staggering off stage.

Many La Dispute fans were just as drained by the set’s intensity and left to get air, but their spots were filled almost immediately by Hot Water Music fans eager for the band’s first proper headliner since mid-2011. With no need for introductions, they band took the stage and immediately tore into “Remedy,” the lead single from 2002’s Cautions. Frontman Chuck Ragan’s immediately-recognizable vocals were as gruff and strong as ever as the band barreled through the song straight into “Mainline,” the opening track from their most recent effort, Exister. Only two songs in, it was already clear why Hot Water Music have been around for the better part of twenty years — they made the high-octane performance look effortless, blasting through the 19-song set with ease. Ragan paused briefly to shout, “So good to see you, Toronto!” before the band launched straight back into the musical onslaught with another Cautions classic, “Trusty Chords.” Fists shot into the air as second vocalist Chris Wollard lead the crowd in chants of, “I hate this place but I love these chords / An empty fate just means an even score.”

There was certainly no shortage of fist-pumping and singalongs over the course of the night, with songs like “Jack Of All Trades” and “Rooftops” inciting especially large volumes of both. While the members didn’t talk much onstage, their gratitude was seen in unspoken ways, from the sudden smiles to Ragan applauding the audience in return as they cheered between songs. Exister was released less than a year ago, but they resisted the temptation to lean too heavily on new material, sticking to the singles “State of Grace” and “Drag My Body” as well as “The Traps.” The rest of the set was made up of a strong selection of songs from the earlier part of their career, stretching all the way back to 1997 with “Freightliner” — met with raucous applause from the diehard fans in the audience. Finally, the band pummeled through “Manual” before exiting the stage — but as every concertgoer knows, this was just the beginning of the end. Shouts for an encore brought the band back for “One Step To Slip,” “It’s Hard To Know,” and one more look back to 1997’s Fuel for the Hate Game with closing track “Turnstile.” The members may not have talked much between songs, but their music speaks for them, and as the final cheers filled the Danforth Music Hall, it was clear that what had been said was more powerful than words alone could describe.