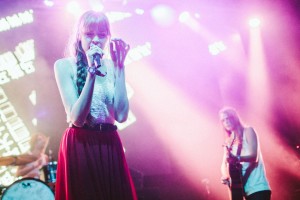 He Is We have officially parted ways with singer Rachel Taylor and will take on Stevie Scott as a  permanent  vocalist and member of the band. In addition to this, He Is We will now be a full band instead of a duo, adding on Jake Randle (bass), Carman Kubanda (guitar), and Harrison Allen (drums). The band have begun working on a new album and founding member Trevor Kelly (acoustic guitar) will continue to be the main songwriter. A message from the band can be read below.

“Rachel is hands down one of the most talented individuals I know and have ever had the pleasure to work with,” explained acoustic guitarist/songwriter Trevor Kelly. “He Is We has been our baby since we were 18 and it’s incredible to see how it has grown and affected people just as it has affected us.” With Rachel’s health making it impossible to continue, she has made the decision to leave the band. “Rachel has voiced that this is the right time to for her to step down for she has become unhealthy and restricted to what she can and cannot do with He Is We,” says Trevor. “I hope everyone supports her in this decision and continues to support her in any future endeavors she finds herself in.”

“As for the future of He Is We, I personally feel there is so much more work to be done,” he explains. “If there is one thing I’m certain of, it is the fact that I’m called to play music and share the message of love and compassion to whomever I can. So the band will continue as a full band with the guys (Jake, Harry, and Carman) contributing to writing, playing and touring as they deserve and understand the circumstances and message of He Is We. As for a singer, there is no one as genuine and honest I could think of to step up and take lead than Stevie Scott.”

“I feel so incredibly privileged and honored being asked to be a part of the He Is We family,” said Stevie. “This has been a dream come true of mine for quite some time. I’m so blessed and excited to get to add my colors and sounds to this next chapter in the He Is We story.”

Tags: He is We