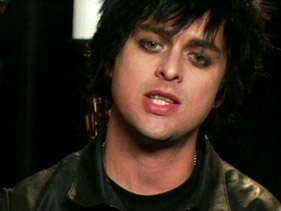 The early word on Green Day‘s 21st Century Breakdown is that the album somehow marks a seismic shift for the band, and with its windmilled guitars, climbing musical interludes and piano-driven ballads, it’s not difficult to see why.

“Oh yeah, that’s ground zero for us,” frontman Billie Joe Armstrong smiled. “Coming from Gilman Street, we saw the most creative people I’ve ever seen in my life. There was a band called Schlong, and they did ‘West Side Story,’ and they called it ‘Punk Side Story.’ And then there’s bands like NoMeansNo, [who made] a record like Wrong that’s completely insane. None of those are conventional – what we call ‘punk rock bands’ – but they are, in their own right, the most creative, the most punk. It’s about being creative. Anytime we write something that’s kind of scary and we feel a bit vulnerable, we always just say, ‘Just go there.’ ”

And Green Day most certainly went there on Breakdown, a manic, far-reaching epic of an album that tells the story of a young couple meandering their way through this hectic decade. It’s a bipolar voyage, to be sure, full of soaring highs and plummeting lows, one meant to be experienced and felt more than actually, you know, followed.

“I think the music is very linear and it takes you on a ride … but it all connects. I’ve always said if you’re going to write a political song, it’s gotta come from the same places that you’d write a love song,” Armstrong said. “But I think the record has these ebbs and flows and it has these dynamics to it. You go from a song like ‘Christian’s Inferno,’ which is the most hateful song I’ve ever written – the most diabolic. And then there’s a song like ‘Last Night on Earth,’ which is like that soul-crushing sort of love moment and, you know, one right after the other, so I think that kind of represents what the record is about in a lot of ways.”

At the center of the maelstrom are Christian and Gloria, a pair of protagonists who represent not just the ideological divide of the 21st century, but the id and ego of Armstrong’s personality.

“Gloria is sort of this torch-bearer. She’s the person who’s trying to hold on to her beliefs. Christian is sort of this nihilist. He wants to burn everything down,” he explained. “Fire gets brought up a lot in the record. And, like, in one aspect, it can be very purifying, and the other it can be reckless and damaging. And I think that’s what they represent. I don’t think there’s a story, per se, between them on the record – it’s what they represent on the record. It’s like giving your emotions flesh and blood.”

But just because Breakdown takes the emotional and the ideological, wraps it up in a big bundle of studio bombast and presents it in three neatly constructed acts, doesn’t mean that Green Day have become buttoned-up artistes. In fact, that’s the trick of the album – there’s a punk-rock heart beating beneath it all. Case in point: The first single, “Know Your Enemy,” which, according to Armstrong, has its roots in a very punk place.

“We recorded ‘Know Your Enemy’ during the Republican convention,” he laughed. “That was an accident …”