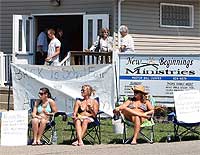 WARSAW, Ohio – Strip-club owner Tommy George rolled up to the church in his grabber-orange Dodge Challenger, drinking a Mountain Dew at nine in the morning and smoking a cigarette he had just rolled himself.

Pastor Bill Dunfee stepped out of a tan Nissan Murano, clutching a Bible in one hand and his sermon in the other, a touch of spray holding his perfectly coiffed ‘do in place.

Both men agree it is classic sinners vs. saints. But George says it is up to America to decide which is which and who is who.

“Tom George is a parasite, a man without judgment,” Dunfee said. “The word of Jesus Christ says you cannot share territory with the devil.”

The battle that has heretofore played out in the parking lot of George’s strip club – the Foxhole, a run-down, garage-like building at a Coshocton County crossroads called Newcastle – has shifted seven miles east to Church Street.

Every weekend for the last four years, Dunfee and members of his ministry have stood watch over George’s joint, taking up residence in the right of way with signs, video cameras and bullhorns in hand. They videotape customers’ license plates and post them online, and they try to save the souls of anyone who comes and goes.

Now, the dancers have turned the tables, so to speak. Fed up with the tactics of Dunfee and his flock, they say they have finally accepted his constant invitation to come to church.

They sat in front of the church and waved at passing cars but largely ignored the congregation behind them.

Likewise, the churchgoers largely ignored the dancers. Except for Stan Braxton. He stopped and held hands with Lola, a 42-year-old dancer who made $200 on her Saturday night shift, and prayed for her salvation.

Lola, who wouldn’t give her last name, said she was grateful for Braxton’s prayers and his time.

The women don’t come here, after all, without their own version of religion. They bring signs with Scriptures written in neon colors:

Matthew 7:15: Beware of false prophets who come to you in sheep’s clothing

Revelations 22:11: He that is unjust, let him be unjust still

Greg Flaig is executive director of the Ohio Owners Coalition, a group of showbar and club owners. He called the women’s protest extraordinary, saying he’s never heard of anything like it in the country.

George said the protest has been a long time coming. He sued the church in federal court several years ago, claiming a violation of his constitutional rights, but he lost. Now, he said, turnabout is fair play.

“When these morons go away, we’ll go away,” George said. “The great thing about this country is that everyone has a right to believe what they want.”

He said his club operates within the law. Dunfee said it does not, that it must close at midnight instead of its regular 2 or 3 a.m. Coshocton County Prosecutor Bob Batchelor said Friday only that he, the sheriff and the city prosecutor are “aware of the situation.”

Gina Hughes spent the morning soaking up the sun in her striped bikini, mostly oblivious to the fire and brimstone being preached in the tidy church building.

The 30-year-old married mother of six said she has danced at the Foxhole for a decade and holds the title of “house mom.” That means that even though she still dances, she also watches out for the six other women who work there.

“These church people say horrible things about us,” Hughes said. “They say we’re homewreckers and whores. The fact of the matter is, we’re working to keep our own homes together, to give our kids what they need.”

Dunfee said it’s not that simple. He said he consistently offers the women help, a chance at redemption.

“I tell them, ‘I will put a roof over your heads, and your bills will be paid, and your children’s bellies will be full,'” he said. Yet they don’t come inside.

The first few weeks, Dunfee piped the sermon outside. But that “agitated” them, he said, and made them dance in the streets.

He said their presence has united his church members and reinvigorated their mission to shut down the club.

“They have now seen the evil firsthand,” Dunfee said. “This has just made us stronger.”

George laughed at that notion.

“They’re just mad,” he said, “because their wives won’t let them come to my club.”