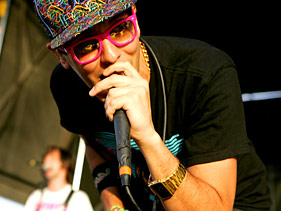 Three years ago, Cobra Starship weren’t even a band.

Two years ago, they weren’t one either, but at least things were beginning to happen. Gabe Saporta – tired of watching his band Midtown being mired in the major-label quagmire – began writing songs on his own, under the name of Cobra Starship (apparently borrowed from a brand of vintage jackets). Somewhere along the way, he got tapped to write the theme song for the Samuel L. Jackson flick “Snakes on a Plane,” which became the first official Cobra release.

Since then, they’ve released two full-lengths, kicked out a keytar player and toured the world, despite the fact that many still don’t consider them to be a real band (wearing neon hoodies and Rollerblading your way through videos tends to have that effect, it would seem). And somehow – through hard work, catchy songs and a “party-till-you-puke” ethos – they’ve corralled legions of fans and have become one of the the second-hugest bands in Pete Wentz’s Decaydance Records universe.

All of which makes 2009 a fairly intriguing year for Saporta and company. They’ve begun work on a brand-new album, are lined-up to support Fall Out Boy on a massive spring tour, and could quite possibly conquer the world as we know it (or at least deck it out in DayGlo). Of course, there are still plenty of hurdles to overcome: Saporta needs to recover from the fairly invasive surgery he underwent in December, to remove a nodule from his vocal cords (he’s healing, but admits to being worried that things might not be OK for the FOB tour in April). They need to create a whole new batch of party anthems. And they need to come to terms with their ever-growing fame.

Late last week, MTV News caught up with Saporta, and in the first of our two-part interview with him (part two publishes on Wednesday), he talks about his aching cords, the state of the Decaydance galaxy and getting, as he puts it, “totally fucked up” for lyrical inspiration. Read on, and fangs up.

On His Busted Cords, and What They Mean for the Future of Cobra Starship: “It’s weird, man, because obviously I can talk, and I can sing a bit, but there are just parts of my singing voice that are gone. There are notes that I just can’t hit. I remember when I first hurt myself, it was on the Warped Tour this summer – that tour is hell, because you never know when you’re going to play. So, like, one morning we had to take the stage at, like, 11:30 in the morning, and I never wake up before 2:30 in the afternoon, but I had to roll out of bed and get dressed and take the stage, and as soon as I was singing, I thought, ‘Fuck, I totally strained my vocal cords.’ I could just feel it. And it never healed after that. We went to Australia and Japan, and it never healed. So I’m trying to take some time off, and I get a call that [pop producer] Max Martin wanted to work on some songs with me for the new Cobra record, so of course I head out there right away. And it was kind of embarrassing, because as soon as I got out there, I just couldn’t sing. At all. So I had the surgery at this place in, like, Beverly Hills, and since then I’ve been trying real hard to take it easy, but they’re not healing all that well. And, to be honest, I’m a little concerned that it might affect the band and the tour. I mean, I’ll drive the train right into the fucking ground if I have to, but on the other hand, it’d be a shame if my voice blew out and the whole thing went to hell. Now I have to think about stuff like that, you know, my boys and my band and stuff. And it’s a little worrying; I’m not going to lie.”

On Cobra Starship’s Ever-Growing Spot in the Decaydance Universe, and About Avoiding the Perils of Pulling a Panic at the Disco: “I try not to look at things like that. All companies are like that – there’s a hierarchy based on success and, well, some bands are more successful than others. And I want to think that the situation with Decaydance isn’t like that. I like to use the example of a band like Gym Class Heroes – they were first or second band on the label, and they watched the Academy Is… and Panic at the Disco pass them by, and [frontman] Travis [McCoy] just was never pissed about it, never complained, and finally they got their shot. I know that we wouldn’t be here if it wasn’t for the people who helped us, bands like the Academy and people like [FOB frontman] Patrick [Stump] producing our record. I don’t know, man, we’re proud to be a part of it.

“At the same time, you know, I think everyone realizes where [the label] is at. But there’s only so much you can do about all that. There was all this talk about ‘the little economy that Fall Out Boy built.’ They got big and helped other bands get their start. But once you get your start, it’s up to you. You can get your foot in the door, but if you don’t have the goods to back it up, you’re kind of fucked. Bands like Panic, they made their first record, and it got huge, and then they made a record they wanted to make, and the second time around, people didn’t want to hear it anymore. And the same can be said about Gym Class, too. But, you know, there’s no way to predict that. Whether or not something catches on and goes to the next level isn’t a science at all, it’s completely random. So, really, with our record, we have no idea. We just want our fans to like it, and we’re going to let all that other shit just play itself out.”

On Getting Dangerously Drunk in New York City: “Writing this record has been really weird because, like, on the last one, I was talking all this shit about celebrity and, like, it sort of became a self-fulfilling prophecy, you know? Talking shit about the cult of celebrity, and now we’re in the middle of it. So I can’t critique it anymore, because I’m not the underdog anymore. When you come up as the underdog, you have a reason to fight … and then when you’re not the underdog anymore, you have to find something new to fight about. And so, on the new record, I’m really trying out this idea of just talking as much shit as possible – about everything and everyone, you know? And I’ve discovered that the best way to get lyrical inspiration has just been to go out all the time. And not just go out, but, like, go out, get as intoxicated as possible, get in trouble, get kicked out of a place. It’s not fun for me to go out unless I get kicked out and get hammered. I don’t want to have a conversation about politics, I just wanna get trashed. And the only place I can do that is in New York City. Everywhere else, if you get out of hand, people get afraid. In NYC, if you get drunk and start fucking with people, they’ll fuck with you right back. And I love that confrontation. It may not be super-healthy, but I love it … so there’s a lot of that on the new album.”

And what about that new album? On Wednesday, Saporta talks more about the songs and the producers, about picking the perfect title and about drawing inspiration from scene drama. If you’re a Cobra fan, you won’t want to miss it.