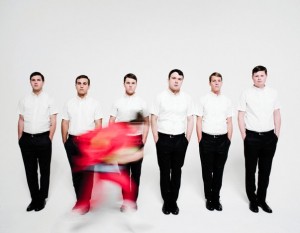 Say Anything have announced that Adam “Sisky Business” Siska of the recently-broken up The Academy Is… will be joining the band on bass. Former bassist Alex Kent parted ways with the band last year, with Kenny Vasoli of The Starting Line and Person L filling in temporarily on tour. Statements from frontman Max Bemis and Siska can be seen below.

“Having parted much more than amicably with Alex last year (he’s still a dear friend), we knew it would be very difficult to find someone who can fill his shoes on both a professional and personal level, but we are so lucky that Adam happened to be available at exactly the right time, and somehow we seem to have ended up with both. This is a guy who is in a band for all the right reasons: a love for playing his instrument and a passion for music. We’re fortunate that Adam happens to deem our music worthy of being the focus of that passion and are so excited to have such an awesome new member of Say Anything.” -Max

“I couldn’t be more excited to become a member of Say Anything. I have been a fan of the band since the release of the debut album, and got to know them well while on tour during the summer of 2008. When I spoke to Max about joining, there was no doubt in my mind that this is a band that I believe in and want to put my heart into. I look forward to seeing all of you at shows very soon!” -Adam

Tags: Say Anything, The Academy Is