Kansas is the heart of the Midwest, and we have some of the nicest people, the flattest land, and a whole lot of wheat. It is sometimes considered a flyover state, but one visit here and you’ll find that its worth spending a little time in. The small but thriving city of Lawrence sits in the northeast part of Kansas, about a stone’s throw from Kansas City and home to the University of Kansas (with about 25,000 musically inclined college students, too). While there’s no Dorothy, Clark Kent, or Winchester brothers around, the city is lively enough with an active music scene that has a little something for everyone. 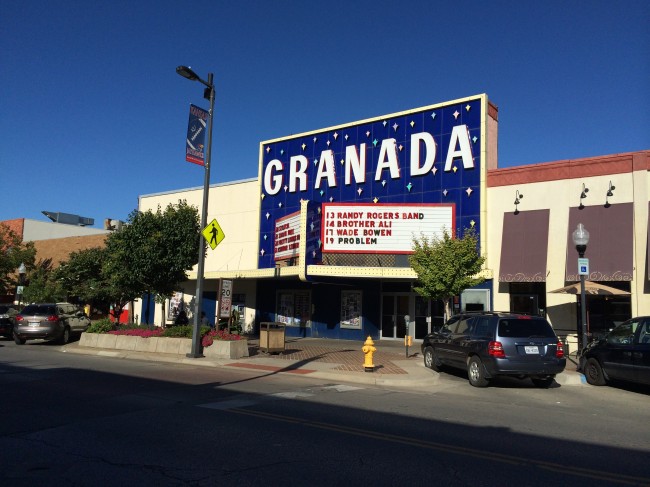 The Granada is one of my favorite venues in the country. Undoubtedly it’s one of the best in Kansas. Perhaps it’s simply because I’ve had the chance to see many great artists there, but I like to think that my experiences couldn’t be had anywhere else.

The Granada books a huge number of diverse acts and there is usually an event every night. It’s a space that becomes what you make it, no matter what type of event you go to. The room has huge black curtains that literally transform the venue into anything you could need it to be (sort of like a Room of Requirement). I’ve seen shows with only 40 other people in the pit, making for an intimate and personal show on a big stage, but I’ve also seen larger bands come through, like All Time Low and Twenty One Pilots, that have the entire building packed wall to wall with bodies.  Besides music, the venue has hosted everything from watch parties during the KU basketball season to midget wrestling. Every night and every show is different, and that’s part of what makes going to The Granada so special. 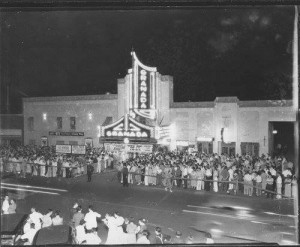 The Granada has a pretty unique structure. Historically, the venue was an old movie theater. The marquee is still shining 80 years later, though the building itself dates back to 1928. But the movie screen and theater seats have been replaced by standing room only space. The white-washed walls curve slightly toward the stage, creating a roundness that encompasses you in sound. The stage itself dominates the space, taking up nearly the entire length of the interior wall. There’s a lot of room for the performing artist to have some fun and move around up there, making for a more interesting show for the audience, too. For the punk fans, there is no barricade and the audience is pushed right up against the wall of the stage. You can look the singer in the eye or watch the guitarist strum each string. The proximity of the venue allows you to take in all of the small details that make any concert experience even richer. 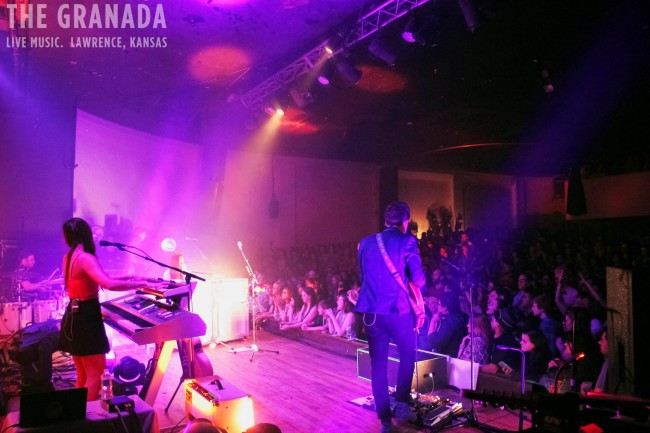 The pit is my favorite spot because that’s where all the action happens, but it’s not the only place to watch the show. The most unique part of The Granada is its levels. The inside is split into two main tiers, plus a balcony, for watching the show. The balcony and the upper tier are the more relaxed places to watch, letting you stand and sip a beer, or walk around to check out merch and meet up with friends. The lower tier is the pit, and can get much more rowdy. At small concerts, you can stand right in front of the artist on stage and get an up close and personal experience. At larger concerts, the pit can get so packed it’s hard to move, but scrounging for a few precious inches of space is half the fun! There’s a railing that separates the two tiers and this is one of the best places to be–unless you manage to get front row, of course. From the rail, you can see over everyone’s heads (it’s especially perfect if you’re short, like I am). Merch usually collects on another small tier off to the side or in the back of the room, which makes it both easy to access and out of the way. Plus, even if you go check out the T-shirts in the middle of an opening set, you don’t actually miss any of the show–the merch platform has a perfect view of the stage, too. In fact, there really isn’t a bad spot in the house.

The Granada might not have very much interior decoration like other historic theater venues in the Lawrence/Kansas City area, but the neutral event space acts as a blank canvas and lets you focus on the music. The most interesting stuff is on stage anyway. The Granada is the kind of place that grows on you from the very first concert, and gets better with every show. 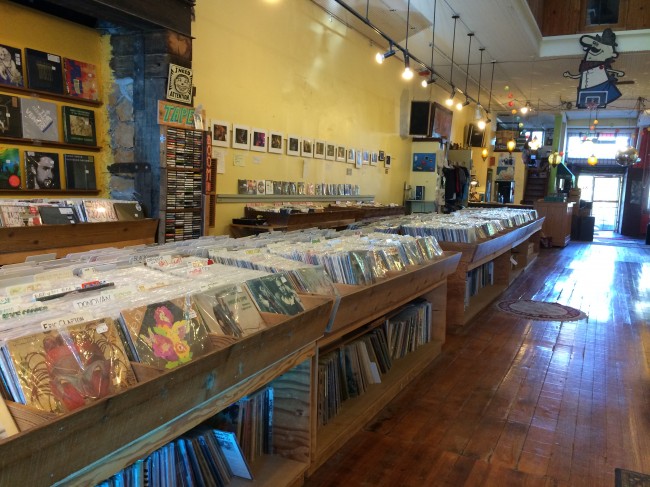 Love Garden Sounds is more than a music store. Besides being the best place to go in Lawrence for all your physical format music needs, the atmosphere is a community in itself.

Walk through the front door, which wears the Love Garden logo of a giant purple squid in outer space, and a splay of CDs, vinyl records, and tapes of every genre unfolds in an unexpectedly large but quaint space that you’ll soon consider a second home. There are even a couple of feline friends lounging in the CD bins or sprawling across the register counters to complete the feeling. What’s better than checking out a new album while scratching a sweet kitty behind the ears? Not much. Welcoming you at the front of the store is a bulletin board of staff recommendations, so you’re never at a loss for something new. It’s easy to find exactly what you’re looking for here, or simply get lost in the massive CD and vinyl bins that stretch the entire length of the store. 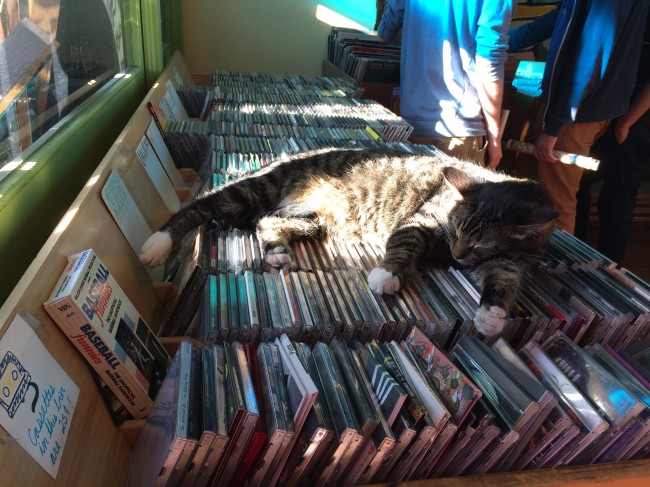 Love Garden is also a participant in the annual celebration that is Record Store Day, and people line up all the way down the block (some even spend the night on the sidewalk) for the chance to buy collectible records. Last year I met a girl who traveled across the Midwest for Record Store Day every year and was visiting Love Garden for the first time. I was happy to welcome her to Lawrence and one of the coolest music stores around.

Besides the awesome cats and tons of great music, Love Garden is just a cool place to be. 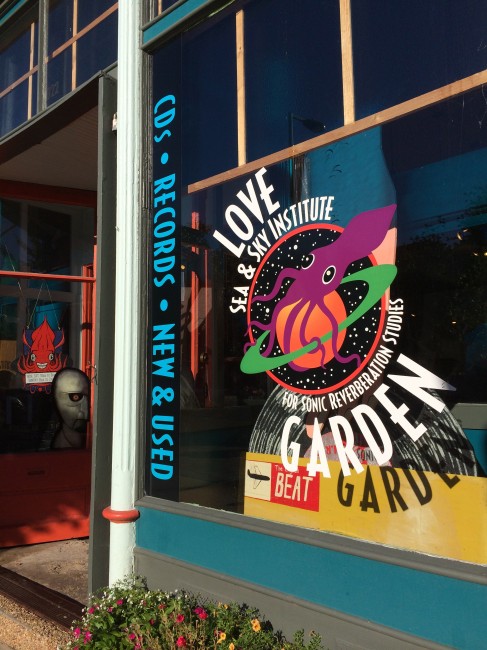 The shop is a combination of modern and rustic, like most shops and restaurants are in downtown Lawrence, with creaky wood floors and exposed rock walls decorated by works of local artists. The unique art, bright colors, and organic feel of the place adds to its memorable charm. You’ll always have something to look at, whether it’s the cow skull painted bright blue and red hanging from the ceiling, the neon lit Johnny Cash record above the door, or the smashed up piano gracing the shop’s front window. Music pours from the store’s stereo in an epic shuffle that switches genres and moods every song. When you flip through the handwritten and drawn CD dividers that verge on art themselves, you complete the full sensory experience at Love Garden.

Love Garden is a culmination of its music, art, and community, and each component is what makes it such a unique place. 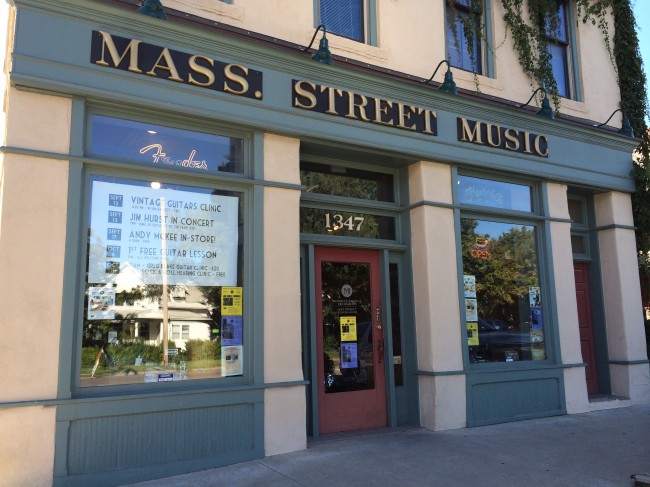 Another gem sitting on the famous Massachusetts Street in downtown Lawrence is Mass Street Music. Having just celebrated its 30th anniversary at its current Mass Street location last year, the independent music store is still running strong, serving the vibrant music community with all of its stringed instrument needs. From the first step through the gold, green, and glass storefront, the eye is drawn to the hundreds of guitars adorning the walls. Acoustic, electric, vintage, new–Mass Street Music has them all, plus mandolins, banjos, ukuleles and more. The instruments are up on the walls and out on the floor for display for people to simply peruse, or pick up and play. 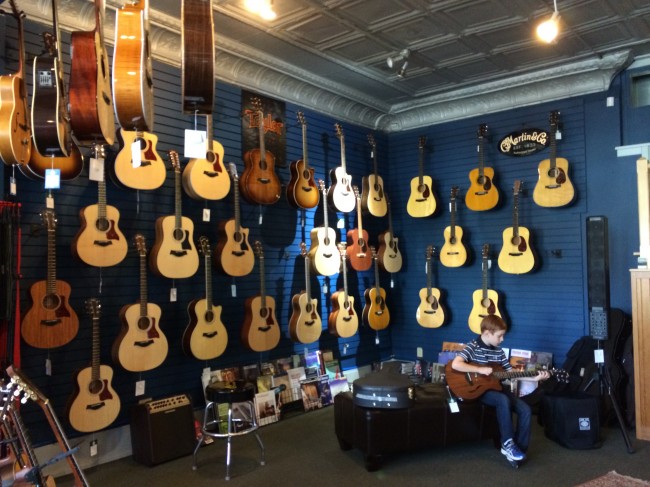 The store is much bigger inside than it looks. It may seem small from the street, but the shop unfolds on multiple levels of practice rooms, lesson and lecture space, and repair offices. It brings music to whole new levels, literally! The entirety of the music shop is divided by large doorways and glass windows, which, coupled with the tall ceilings, give this place an openness that beckons you to ingest every detail.

Mass Street Music is highly involved with the community, too. The store offers free workshops and lessons on Saturdays for all instruments hosted by the knowledgeable and talented staff members. I sat in during a banjo workshop one weekend taught by members of the Kansas folk band Split Lip Rayfield. The band is a local favorite featuring intricate banjo and a homemade gas tank upright bass. There is always something new to see or learn here. 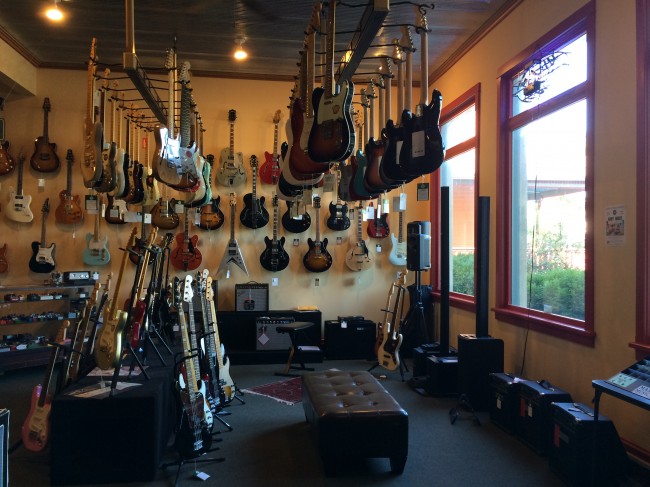 One of the most valuable services Mass Street Music offers is stringed instrument repair. The shop has a small staff of luthiers, a team of professionals who can build or expertly repair any stringed instrument. In fact, the store’s owner and founder Jim Baggett started the business by restoring old guitars.The top floor’s repair studio is brimming with guitar skeletons, but thankfully accompanied by people who can put them back together. If you’re ever through Lawrence and damage a guitar from rocking out too hard, this is definitely the place to go.

In Kansas, there aren’t a whole lot of music venues or stores, but each of them are quality places to visit. You’re always going to have a cool experience. They inspire creative opportunity, and also help local musicians pursue their passion. I think it’s time to finally retire the “fly-over” descriptor of my home state and let this place shine as our motto intended (Ad Asta Per Aspera–to the stars through difficulty). There’s plenty to uncover in the (almost) geographical center of the continental United States, and anyone can find something to enjoy here.

Tags: For The Record