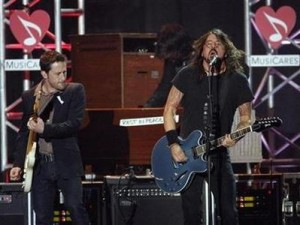 LOS ANGELES (Billboard) — The Foo Fighters finally got their first No. 1 album in the United States on Wednesday as their eighth studio release led a field that also included strong debuts from Alison Krauss and Paul Simon.

Coming in at No. 3 in the United States was Alison Krauss & Union Station’s “Paper Airplane,” selling 83,000 copies. Krauss has gone higher once before (and sold more), with Robert Plant on their Grammy-winning collaboration “Raising Sand” (No. 2 in 2007 off a 112,000 bow). However, “Paper” posts Krauss’ highest chart rank on her own (or with Union Station) and her second-biggest sales week. Krauss’ best sales week, not counting the Plant collaboration, came when “Lonely Runs Both Ways” shifted 86,000 during Christmas week back in 2004.

Right behind her was Paul Simon, with a career-high debut at No. 4 with “So Beautiful or So What” (68,000). It’s the singer/songwriter’s best sales week since SoundScan began tracking data in 1991 and his highest rank on the Billboard 200 since “Rhythm of the Saints” peaked at No. 4 in 1990.