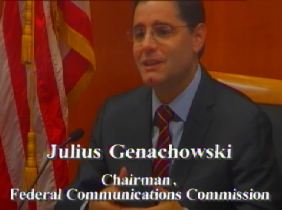 As expected, The Federal Communications Commission — by a vote of 3-2 — has passed the Net Neutrality rules pressed for by Chairman Julius Genachowski. The vote was held this morning in an Open Agenda Meeting at The FCC following a presentation called “Preserving The Open Internet.”

All of the Commissioners took their time making their viewpoints known.

In arguing for the measure, Michael J. Copps said he wished this measure had been stronger, “Going as far as I would have liked was not in the cards.” He specifically wished wired and wireless broadband would operate under the same rules.

Robert M. Mcdowell disagreed, saying “The FCC is not Congress. We cannot make laws.” He accused the Commission of an “obsessive quest to regulate at all costs.”

Mignon Clyburn also indicated she wished the order went further, saying consumers would benefit from including wireless broadband in this ruling.

Genachowski opened his comments quoting, “The web as we know it is being threatened.” He continued he wanted “a strong and sensible non-idealogical framework” to address this issue.

What IS Net Neutrality?

What the order actually addresses was summed up by LANCE ULANOFF, writing in PC MAGAZINE, “I find both the support and opposition to the FCC’s efforts confounding. On the support side, I wonder why those who favor laissez faire would want the government to get involved in a process that seems to be doing just fine by itself. There appears to be no shortage of Internet access and information innovation, and regulation could actually slow that down. On the opposition side, I wonder why people are not more concerned about actions by some of the biggest ISPs and gate-keeping companies that either allow or block innovation on our home and mobile devices. Without government intervention, these companies can do pretty much what they want, meaning they can allow as they please, block as they please, open the pipes when they want and damp them down as they feel necessary.”

Earlier this year, The FCC’s ability to regulate the net was handed a loss, following an appeals court decision that said the agency lacked the authority to stop COMCAST from blocking bandwidth-hogging applications.