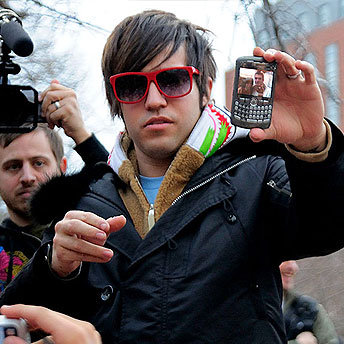 Given Fall Out Boy’s penchant for publicity stunts (see this year’s nixed attempt to set a Guinness World Record by playing in Antarctica, followed by successfully setting the record for Most Interviews On Radio In a 24 Hour Period By A Pair of Two after talking to 72 radio stations), it should come as no surprise that the band celebrated yesterday’s release of Folie Ã  Deux with a 36-hour New York promotional blitz that involved a nearly free show, performing on late-night TV and almost getting arrested.

Over the weekend, Pete Wentz posted cryptic teasers on his blog for two “surprise” events that would take place in the NYC area on Monday. First up: a rogue gig at Washington Square Park, at which the band was supposed to play an acoustic set. The band skipped getting a permit for the gig in the interest of spontaneity – but that meant they faced arrest if they played one note. So, while Wentz, drummer Andy Hurley and guitarist Joe Trohman clapped along and the 200 kids in the park offered vocal backup, Patrick Stump delivered a soulful a cappella rendition of “Grand Theft Autumn (Where Is Your Boy)” and the band tossed a few free CDs into the crowd.

Later that night, after a quick stop at the Rolling Stone holiday party, Wentz and Stump joined Trohman at the bar FOB co-own for a private listening party (other guests included members of The Academy Is… and Cobra Starship). Wentz headed uptown shortly before midnight to publicly purchase Folie at the Virgin Megastore in Times Square (the second blogged surprise), while Stump opted to leave a bit later and did the same at the chain’s Union Square location.

On their official release day, Fall Out Boy celebrated by taping a performance of “I Don’t Care” for Late Show with David Letterman, which they spiced up with light-up guitars. The native Chicagoans then headed to the Nokia Theatre in Times Square for a live show with 2,100 of their fans (tickets were either free or just $10).

The nearly hour and a half set was a healthy mix of tunes from the band’s four LPs that kicked off with “Thks Fr Th Mmrs” and ended with a one-two punch of “Sugar, We’re Going Down” and “Dance Dance.” Wentz, who decorated his face with “BX” for his son and the New York borough, delivered pop-culture references (a Twilight bit inspired overly enthusiastic cheering) but tended to be too long-winded. Clever teases of Prince’s “Kiss,” Michael Jackson’s “Thriller” and Estelle’s “American Boy” hit right on the R&B crossroads the band is exploring on Folie, and backup dancers appeared for two numbers.

Before wrapping things up with a signing at the Virgin Megastore across the street, Stump sang the band’s seasonal anthem, “Yule Shoot Your Eye Out” and they finished up with “Saturday” – a track from 2003’s Take This To Your Grave that has closed Fall Out Boy shows for several years. It was a good reminder that buried beneath the band’s publicity-savvy exterior lays a quartet that hasn’t forgotten its roots.