Gotta hand it to Patrick Stump, Pete Wentz and company: The hardworking, blue-collar Midwestern pop-punkers-with-an-emo-attitude have gotten ever savvier and, dare I say, more mature with their songwriting and song-arranging.

Consequently, “Folie a Deux,” (French for “madness shared by two”) may be one of the year’s most surprising albums. A tactfully produced (Neil Avron/Pharell Williams) affair that steers the Chicago-area band more toward the pop mainstream without sacrificing Fall Out Boy’s anthemic brashness, the band’s fifth album represents the zenith of its seven-year career. 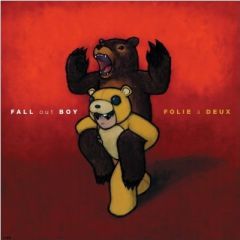 Some tracks — “I Don’t Care” with its “Spirit in the Sky” guitars and the zippy “27” — are instantly and mesmerizingly catchy, which can’t be said for Fall Out Boy’s earlier material which often sounded like variations on the same song.

On “Folie,” it’s finally clear that the ever-youthful Fall Out Boy wants to play with the big boys. With guest spots by Elvis Costello, Lil Wayne and Debbie Harry, the band covers all the musical bases, even giving a nod to the blues (they are from the Windy City, after all) at the end of “w.a.m.s.” with an acoustic, back-porch outtake.

OK, there are times when the sweet backing harmonies and production gloss seem a bit much for a bunch of punks, but the punny and droll songs (“America’s Suitehearts,” “She’s My Winona,” “Headfirst Slide into Cooperstown on a Bad Bet,” with Costello) keep things grounded in a don’t-take-yourself-too-seriously sort of way.

Guitarist Joe Trohman told me a couple of years ago, just as Fall Out Boy began to skyrocket, that “things are exceedingly bigger than we ever expected.” Get used to it, Joe. As a track from “Folie” implies, this album could make these boys America’s next rock ‘n’ roll sweethearts.