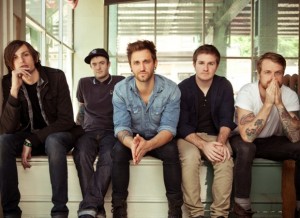 Fans eagerly lined the street around Gramercy Theater on December 13th waiting patiently for doors to open for what would be Every Avenue’s last New York City show. The band announced in late October that they would be parting ways for the time being and that the “Last Call” tour would be their farewell. The night was a celebration of the band, the friends they brought along to share the moment, and most importantly the fans that have supported them throughout the years.

Kicking off the night were pop-rockers Car Party. Hailing from Maryland, the band poured their hearts into their short set relying heavily on material off the Patterns EP.   Keyboardist Nick Krus threw in some crazy moves reminiscent of Motion City Soundtrack’s Jesse Johnson, while drummer Taylor Hughes kept the band in sync. Trying hard to interact with the crowd, the band had the audience pose for a photo before finishing off the set with “Foolproof.”

Nashville’s Bonaventure made a special trip to NYC just to play this show and they certainly won the audience over. Playing pop-rock music with a country twang to it, the band was able to get the crowd moving their feet and clapping along. Front-men Andy Albert (formerly of Holiday Parade) and Dan Smyers’ voices worked perfectly together as they performed songs such as “These Shoes” and “Right By You.” Jimmie Deeghan of Every Avenue played guitar for the set, which also gave fans a nice little treat. Before ending the set with the upbeat and banjo laden “Just Another Night” the band asked the audience, “Do you want to party?” and they definitely did.

Conditions are a band that go on a lot of diverse tours and are able to work any crowd in front of them.  This show was no different as the band had the audience in the palm of their hands with fans singing back every word. Single “Better Life” got the best reaction, while new song “Skeleton” showed how the band has grown over the years. Next up were Set It Off, who also kept the energy high. If you haven’t paid attention to the band the past few years, you might be confused as their sound has changed immensely. Blending theatrical pop music with a heavier sound, the band is almost like if Panic! At The Disco and Chiodos combined forces. Frontman Cody Carson ran around the stage like a mad man while the band synchronized guitar swings. Relying heavily on new material, the audience members were eagerly singing along although no one even made an attempt to move when asked to “open up a pit.”

The venue finally began to look full as Every Avenue took the stage. The occasion was definitely bittersweet as the band played songs spanning their discography while emphasizing that even though this is their last tour for a while, it’s very likely the band will be back in the future.   The set started with “Days Of The Old” and the room lit up with the smiles of the audience. The band definitely thrived off the crowd as their energy increased as they delved deeper into the set.   Before kicking into fan favorite “Think Of You Later (Empty Room),” frontman Dave Strauchman had to break up a cat fight of sorts up front stating for the two involved to “Shake hands, tis’ the season, right?” A fight isn’t typically something you’d find at a pop rock show, but it was quickly forgotten as the band continued playing. For “Chasing The Night” old guitarist Jason Letkiewicz joined on stage and it was definitely a fun moment for the band to share. Engaging with the crowd, Strauchman asked if they wanted to hear “One More Song” or “This One’s A Cheap Shot,” the latter winning by a landslide. The band ended the set with the appropriately named “Saying Goodbye” until cheers for more led into an encore.

Strauchman once again took the stage, acoustic guitar in hand. He played the emotionally driven “Only Place I Call Home” and “Between You and I,” bringing tears to the eyes of many girls. The rest of the band entered, finishing off the night with “Where Were You” and “Tell Me I’m A Wreck.”   The venue erupted with applause and you could tell by the look on fans’ faces that this was a night that they would not forget.

Tags: Bonaventure, Car Party, Conditions, Every Avenue, Set It Off