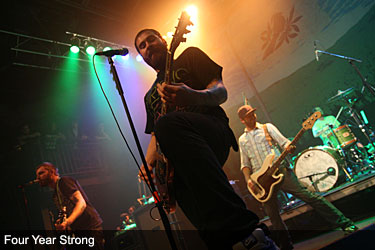 NEW YORK — Even before the doors to the Gramercy Theater opened, it was apparent that this show was going to be an entertaining way to start the weekend.

The line of fans wrapped around the block, with nobody in it paying attention to the below-freezing temperatures that persisted bitterly througout the wait. Even outside the concertgoers were screaming, only to be placated upon being granted entrance into the venue, where they were greeted with friendly bands at merchandise tables and $12 beers that signaled a fun-filled evening lied just ahead.

The Gramercy can house 700+ sweaty bodies on any given night, and this evening it was filled to the brim even before the opening act, Title Fight, took the stage. The entire area in the converted theater was filled, with shoulders touching shoulders and everyone waiting for Title Fight to do its thing.

At first the Pennsylvania quartet displayed a minimal level of crowd interaction, but it did not matter. The concertgoers appreciated this group of kids, far from rock stardom but focused directly on its music. A group of some 100 fans that had followed the band all the way from home carried the crowd’s response, singing every last word. For them, the nine-song performance made for the event of a lifetime.

The set consisted entirely of material from last year’s The Last Thing You Forget, the home of three different EPs for this band. With an attention to detail, Title Fight was able to effectively capture the strained working class image that Brand New has perfected. If there were any doubts about its ability to win over a crowd, those were tossed when concertgoers responded to the post-hardcore 90s punk-meets-Saves the Day sound and stage presence.

The next band was This Time Next Year, a five-piece that came all the way from Walnut Creek, Calif. Guitarist Brad Wiseman expressed the band’s sense of gratitude to get the chance to be on a huge tour such as this one.

“It’s satisfying to get something like this, we have been touring for three years and this is the biggest thing we have ever done,” Wiseman told idobi.

Fronted by the energetic Pete Dowdalls, this band was able to stir up an audience unfamiliar with some of its material by being hugely energetic and interacting with everyone in the building. And though it started as another band with a small loyal following amongst those in the sold-out audience, its New Found Glory-esque stage presence got everybody moving by the end of the performance. The upbeat set consisted entirely of tracks from Road Maps and Heart Attacks, released last year through Equal Vision records.

“[This Time Next Year] just wants people to hear the record and know who we are,” bassist Tony Allio told idobi.

After a short ten-minute break, the hardcore punk outfit and main support for the tour, Strike Anywhere out of Virginia, took to the stage.  The immediate response was lukewarm at best, but lead singer Thomas Barnett’s willingness to jump into the crowd and run from one side of the stage to the other ignited the filled-to-capacity venue.  The band performed several tracks from its new album, 2009’s Iron Front, which served as a precursor to the more popular material from the Jade Tree days.

Many of the songs that got the crowd moving were from Change is a Sound and Exit English, some of the band’s earlier time. As Barnett shoved the microphone into the crowd, the audience basked in its time to shine as kids screamed the lyrics back louder than Strike Anywhere’s frontman could sing them. And like its predecessors on stage, this band was grateful to just keep pursuing what it called “this hardcore thing.”

As soon as Strike Anywhere completed its intense 11-song set, the chants of “Four Year Strong! Four Year Strong!” began, lasting intermittently for 25 minutes until the banner went up and the “Dicks, Pussies and Assholes” speech from Team America: World Police blared over the speakers.

The Worchester, Massachusetts natives took the stage, with vocalists Alan Day and Dan O’Connor sporting tremendously intimidating beards while bassist Joe Weiss and synth expert/vocalist/ hype man Josh Lyford rocked cutoff jean shorts. This fashion statement immediately drove the crowd into frenzy and caused them to open the biggest circle pits of the evening. The band then dove right into a set consisting mostly of material from 2007’s Rise or Die Trying.  Peppered in was a trio of songs from the new album, the namesake of the tour, as well as a cover of  “Semi-Charmed Life.”

Besides a small amount of manufactured controversy by the Red Sox faithful in Yankee territory, the band-audience dynamic this evening was one rarely seen on a normal night.  This could be attributed to Lyford mirroring the actions of Strike Anywhere’s lead vocalist and jumping into the crowd, microphone in hand, to allow his fans to belt out lyrics they love.  Both sides of the equation seemed to feed off the other as the evening barreled towards its climax, set closer and fan favorite “Heroes Get Remembered, Legends Never Die.” With every band member and every kid screaming every word, the energy was pushed off the deep end into uncharted territory.

Such a ferocious and energetic live performance from each band provided an excellent way to kick off the weekend.  At the end of the night, there was not a voice left intact nor a frown in the house. Expectations had been met.