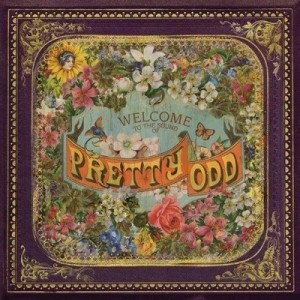 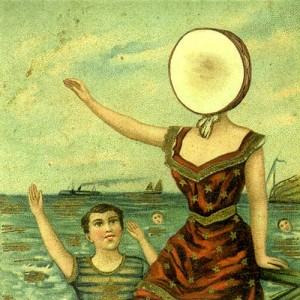 Two weeks ago we introduced our new bi-weekly column Double Take, in which we explore the subtle connections between two seemingly-unrelated musical items. The column’s debut focused on two quintessential summer albums, Jack’s Mannequin’s Everything In Transit and The Antlers’ Burst Apart (check it out here). For our second installment, idobi writer Marina Oliver looks at the common themes shared between Panic! At The Disco’s mixed-reception sophomore release Pretty. Odd. and Neutral Milk Hotel’s classic In The Aeroplane Over The Sea.

In light of Panic! at the Disco’s newest album dropping this week, I’ve been thinking a lot about their narrative arc, if you will. I use that particular phrasing both because I’m caught in the middle of a whirlwind of literary analysis papers this month (yay, English major life) and because I think they fit the criteria for one of those bands that has shown incredible tangential progression throughout their existence. I’m not here to wax poetic about Panic!’s development or how I’m proud of them as people (though I’ve been known to do so tearfully on several occasions in the past). Rather, I intend to explore their album that most often slips through the cracks of association – that’s right, people, I’m talking about Pretty. Odd. If A Fever You Can’t Sweat Out feels like Las Vegas or any other slightly sinister city soundtrack poking plenty of holes in the fabric of society’s beliefs while Vices and Virtues sounds like revisiting the city streets with a few years of wisdom and maturity under the belt, then Pretty. Odd. sounds like a wacky, whimsical garden that some dreamer accidentally planted in the middle of the concrete jungle and left there to artfully overgrow.

Pretty. Odd. manufactures its particular brand of whimsy through abstract lyrics, delicate variety of instrumentation, and timelessness. It could be a short, sweet kiss with the past, a la the aesthetic of the movie set Big Fish, or it could be a vibey journey into the future. Either way, the album places you in a certain headspace distinct from reality, and therein resides its magic. Most of these qualities hold true with the second album I’d like to put on the table in this column – Neutral Milk Hotel’s In the Aeroplane Over the Sea. It’s not new (it was released when I was in first grade, back in good ol’ 1998), but its timelessness makes it feel simultaneously novel and like you’re returning to a familiar secret space every single time you listen to it cohesively. It’s not exactly the surreal garden of Pretty. Odd., mostly because the latter is a whimsical, dare I say Beatles-esque throwback album and the former is gritty fuzz folk that sounds like someone’s trashed living room, but the basic surreal feeling crops up throughout both works.

Pretty. Odd. speaks to a time when Ryan Ross still grappled with creative control issues in Panic! at the Disco; a time when the exclamation point in their name disappeared in a whiff of smoke and they wore a lot of brown cutoff pant/vest combinations. It has punchy dimensions, like the clanging piano chords on “Nine in the Afternoon” or the extremely driven “Pas de Cheval,” but it slips into bittersweet melodies, almost in a lullaby fashion, more often than not, and the result is enough to make you revel in waves of wonder and nostalgia. “Northern Downpour” always affected me the most, perhaps because it boasted all the lamentations of a love song (“I missed your skin when you were east / You clicked your heels and wished for me”) with the abstractness of more enigmatic imagery (“fabled foreign tongues,” “lips made of yarn,” etc.) There’s plenty for the reader to carefully unpack and assign meaning. In “She Had the World,” in what sounds like a slowly spinning carousal after all the carnival guests have left the park and the lights have shut off, a disembodied sense of loss surrounds the story told within the song. It affected me so much that when I turned 18, I had the lyrics tattooed onto my skin. The heroine of the story is brought to life quite vividly – an image of a girl floating ethereally through life is easy to envision to Urie’s crooning and the harpsichord precision backing the song. All the aforementioned tunes in conjunction with the even more convoluted, Ross-driven “Behind the Sea” and the odd dip into a dissociated country landscape on “Folkin’ Around” provide the unreal feeling of the album. It radiates lightness in the sense that it doesn’t ground itself in any particular manner. This is easier to overlook than, say, the in-your-face aspects of their other albums, so I’d like to think this is why it slips below the radar within their discography. I live for albums that paint such a brilliant picture of a certain type of life that doesn’t necessarily exist on earth as we know it.

In the Aeroplane Over the Sea parallels this sense of time- and place-lessness with its composite of pieces of history with fairytale-esque elements, sensual body imagery, and urgent vocal performance. It’s easy to pick up on all the Anne Frank references once you know to listen for them. Frontman Jeff Mangum drew inspiration for the concept of the album from her diary, and it shows; it makes some of the lyrics all the more poignant. “But now we must pick up every piece of the life we used to love / just to keep ourselves, at least enough to carry on,” Mangum croaks in homage to this pervading sense of lacking–space, time, concreteness, identity. It’s heavy subject matter, but it speaks volumes about the human condition and still manages to reach dizzying heights at certain points. The total cohesion of the album, evident in how each track bleeds into the next and never truly leaves the music, calls for a marathon of music listening rather than the sprint offered by a shuffle or a solitary track. Some of the most resonant lyrics I’ve ever heard lurk within this album’s many layers. Take “Two-Headed Boy Pt. 2,” for instance; the sense of mourning seeps throughout every single guitar strum, every refrain. A sensual language of bodies and souls flourishes the lyrics in this track: “As your mouth moves in mine, soft and sweet / Rings of flowers ’round your eyes and I’ll love you for the rest of your life.” It conjures ethereal images of lovers searching for one another through time and space, through earthliness and a plane only accessible through the fantasy of the human mind. The album tiptoes delicately between completely fantastical and so organic that it feels like a love and hate story told across every era between humans and their environment. Like Pretty. Odd., the true charm of the work lies in its whimsy, however twisted and dark at times.

Never discount an album that can pull you out of your mortal headspace and into a higher frame of reference where the shackles of reality fall away and leave you with endless possibilities. Both Pretty. Odd. and In the Aeroplane Over the Sea offer tantalizing alternative universes within their track listing for those willing to sit down and really delve into their essence. The opportunity to suspend belief pays off in whimsicality through these art forms. It’s amazing that two bands so diverse with such distinct sounds can harness this feeling into completely differing offerings of music. Now, go pay homage to Ryan Ross with a walk through the garden, then pop on NMH and party like it’s 1999 – er, ’98.