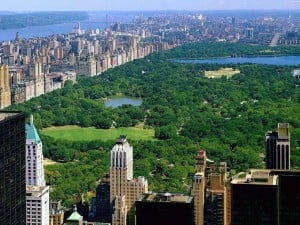 NEW YORK – Coheed and Cambria came, sold out the Central Park SummerStage and rocked so hard a man projectile vomited Wednesday.  Though fans were nearly melting, their intensity never skipped a beat.

Amidst the festival-like atmosphere and beer tents that populated a fenced-in area of Central Park, it remained quite obvious that Coheed and Cambria was the evening’s main attraction. Even when the Nyack, N.Y. quartet ended the 14-song set with “In Keeping Secrets of Silent Earth: 3”, the title track from their second album, the fans wanted more.

The show began at its scheduled time of 7 p.m., but schedule opener Torche was nowhere to be found. The band had good reason, with almost its entire supply of equipment, personal belongings and passports having been stolen two weeks ago in Chicago.   The group had to drop off the rest of the dates of this tour and is now booking local shows in the Northeast to recoup some money. (Writer’s note: If you are in the Chicago area and know anything about the robbery, please contact the band: http://www.myspace.com/torche.)

The crowd got over this fact quite quickly because Coheed and Cambria and Circa Survive were still on the bill.   These two acts utilize enough experimentation in their live show to whet any progressive rock fan’s appetite.   Circa Survive, an experimental five piece hailing from southeastern Pennsylvania, was an ideal complement the modern rock deities headlining this outdoor show.    The band, led by former Saosin vocalist Anthony Green, meandered through 11 songs in set, playing a bit earlier then usual due to the aforementioned Torche absence.    The songs took on a life of their own when performed live, and exceeded any expectations one would gather from listening to their three full-length albums.    Half of the songs were off Blue Sky Noise, the group’s third full length that came out one month ago through Atlantic Records.    This fact notwithstanding, the kids in the pit area were responding just as strongly as they were to songs that have been out for five years.

In the minutes leading up to Coheed’s arrival, the crowd was chanting and cheering vivaciously, both for the band and for relief from the summertime temperatures in May.   The band played 17 songs spanning its discography, and included fan favorites “Everything Evil”, “A Favor House Atlantic” and “Three Evils”.   A few members of New York radio station 101.9 WRXP, including Matt Pinfield, were there to introduce one of their “favorite bands” to the thousands of sweaty bodies that certainly knew what they were in for as soon as they walked in.

“His fingers are all over the guitar, it looks like he’s just messing around, but its on purpose!” concert fanatic Larry Jones told idobi, referring to lead singer Claudio Sanchez’ nimble fingers and furious fretwork during the opening chords of “Guns of Summer”.

The main man in this band knows how to entertain a crowd and did that all evening; his antics included jumping all over the stage and playing the guitar with his teeth.  The entire band exhibits a chemistry rarely seen these days, emphasized by the backing vocals of Travis Stever and Michael Todd.    There was little talking during the first half of the show, but as all four members lightened up, the banter began.  They constantly thanked the crowd for coming out and dedicated songs to their families.  Stever even dedicated the song “Far” to his grandmother, which caused the crowd to break out into chants of “Gramma! Gramma!” The visual aspect of the show astonished fans as well, with a laser light show complementing images projected onto the giant Coheed and Cambria backdrop.  Sanchez did not steal the spotlight, as he and fellow lead guitarist Stever traded guitar solos in more than half of the songs.

This back and forth included the epic “Welcome Home”, where Sanchez consistently attempted to one-up the now short-haired Stever.   In addition to the dental guitar playing, Sanchez took a few bars of solo while playing behind his head and dancing on top of his pickups to amuse the loud, sweaty crowd.

For Coheed and Cambria, “This was the biggest show that we have ever headlined.”