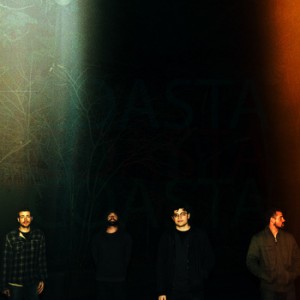 The self-titled, self-released EP from alt rock newcomers Coasta will come as a breath of fresh air to any lover of the Long Island music scene. Coasta are fronted by Jamey Lacey, the younger brother of Brand New’s Jesse Lacey, but the strength of their debut release proves they don’t need to rely on this association to get noticed. Although the band are still unsigned, their music is impressive enough to have already caught the attention of Run For Cover Records, who will be pressing a limited edition run of the EP on vinyl this summer. A mellow blend of alternative and indie rock, Coasta’s debut release provides the perfect soundtrack for a rainy summer day.

The EP begins with soothing drum rolls and a dreamy repeated guitar riff in “Young Blood.” When raw vocals and a bridge carried by valiant, high-pitched guitars kick in, it’s hard not to make the obvious Brand New comparisons – however, there is no doubt that the sound of Coasta has a uniquely pleasing ambiance of its own. The same gentle, whimsical undertone of the opening track shines through on the second, “The Slide,” a slower song with softer, sweeter vocals.

If you’re not hooked by the end of the second track, “Michael Traction” and “Sirens” are sure to change that. These songs showcase Coasta’s versatility and their potential to be a dynamically well rounded group in the future.   At its halfway mark, the EP shifts toward a more indie rock sound, best described as Broken Bells meets Incubus. The EP closes as strongly as it opened with “Sunzal,” a fitting end to the record as it beautifully combines the diverse elements of the other tracks to create a unified sound.

Soothing, catchy, and lyrical, Coasta have delivered a debut EP that will have any fan of alternative or indie rock falling in love. With any luck, Coasta’s first release will be a microcosm of a lengthy discography to come. While it is strong enough to keep new fans satiated for a while, it will be hard to suppress the anticipation for more from Coasta after such an impressive introduction.

To listen to or buy the EP, visit Coasta’s bandcamp page  here.