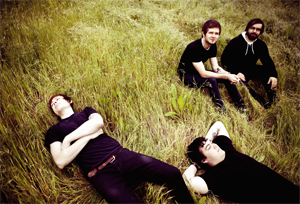 Coming hot off of a tour-filled summer, idobi Radio caught up with The Dangerous Summer on a rainy day in a college town amongst the cornfields of Iowa.   After spending the last few months on the road with acts such as Sherwood, The Morning Of and Go Radio, the gentlemen in The Dangerous Summer are finally winding down for some much deserved rest.

Just recently, the band was announced as an opener for VersaEmerge on the extremely anticipated Vultures Unite Tour that will cover a large chunk of the US this fall.   Frontman AJ Perdomo noted that “tickets have been selling out like crazy.”

Considering the rabid VersaEmerge fanbase as well as the diehard The Dangerous Summer fans, Perdomo’s statement has no need for questioning.

Though it’s been over a year since the release of their first album, Reach For The Sun, the album seems as new as ever in the minds of fans, guitarist Cody Payne states, “we definitely plan on touring a lot before putting anything else out — we want to milk it for what it’s worth.”

Widely received as one of the best albums of 2009, the band’s debut full-length Reach For The Sun will be released on vinyl this October.   In Perdomo’s words, “it’s like a whole new thing; people who really love the album can keep it in collectors form.”

The band haven’t stopped there as far as new releases.   Earlier this summer, they released Live In Baltimore; a seven song live EP recorded in January by Reach For The Sun producer, Paul Leavitt. Perdomo says, “it became a digital only release, but we’re all real stoked with it, it turned out awesome.”

When asked about their next album, Perdomo said, “we’ll see it next year, hopefully around spring time.   I’m really excited about all the new songs, and we’ve definitely been pushing forward with our sound and just doing new things.”

Perdomo also commented on the progress of their new album, “we’ve demoed some instrumentals; we’re working on it slowly but surely.   Right after this tour we’re going to be in the studio just demoing and demoing, as we’ve been doing.   We’re just trying to get the songs together and record this winter.”

The most recent news from The Dangerous Summer camp is their latest song, ‘Good Things’.   The single won’t be on their next album, but it certainly proves the band’s flair for writing catchy and honest songs is only improving, tiding fans over as anticipation of another album grows.   Lyrics on the new song hold true to the bands growth; “Why do I feel so invisible? / Good things will come my way.” If The Dangerous Summer keeps on the same track, good things will definitely come their way.

Perdomo summed up the interview with some sound advice; “Listen up!”

The Dangerous Summer will kick off the “Vultures Unite Tour” October 21 in Dallas, Texas. Official tour dates can be found on the band’s MySpace page, found here.