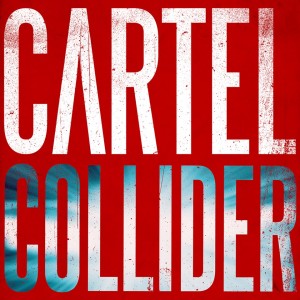 Cartel’s fourth full-length album Collider is a generally light-hearted pop rock album that fans have long awaited. Released nearly three and a half years after Cycles, the album was entirely self-produced and self-released. At first listen, the album may come off slightly bland, as only half the songs really carry any punch. The album is also missing the dynamic Cartel have proven they are capable of in previous albums. However, after multiple listens the tracks do begin to grow on you and there seems to be a little more substance beneath the surface.

“Second Chances” starts off the album strong with the guitar and drums taking the lead and thrusting the track into a fast paced pop-rock anthem that is definitive of Cartel. Vocalist Will Pugh sings loud and clear on the catchy chorus, making the opening track a memorable one. The album starts well with the initial track, but loses some of its momentum on “Take Me With You.”

“First Things First” picks up speed again and though it starts off simple and steady in the verse, the pre-chorus draws the listener into an infectiously catchy chorus where Pugh sings, “Things could be worse/ but they could be better/ first things first/ always remember to keep your head up.” The driven nature of the song makes for another classic Cartel anthem to rank with classics like “Let’s Go” and “Honestly.”

Fourth track and possibly the most disappointing is “Best Intentions.” It begins deceivingly well with a gritty guitar riff, but the lyrics and chorus are nothing short of a letdown. Overall, it feels a little amateur for the band, who obviously know how to write a solid pop song but simply missed the mark. Strings close the mediocre track in an attempt to salvage it — a nice addition to the album, but it probably could have worked better on a different song.

“Thin Air” stands steady in the middle of the album and acts as a bridge between the first and second halves. Joseph Pepper’s muted guitar stays low in the background, giving Pugh’s voice and Kevin Sander’s drums a bit more of the spotlight. Pugh sings, “Now you’ve gone and disappeared/ into thin air/ you vanished like a ghost/ tangled in despair,” which proves he can provide thoughtful lyrics as well.

“Uninspired” shines as one of the best tracks on Collider. It is quintessential Cartel: strong vocals, sharp guitar, upbeat drumming, and a great hook. This track brings the punch that the previous tracks didn’t quite achieve. It opens with Pugh’s vocals, clear and alone, before being joined by guitar and drums, adding layer-by-layer and building up the song’s strength until that long-awaited, satisfyingly sweet chorus.

Placed in the middle of the album, “Uninspired” seems to almost overshadow the tracks around it, including “Sympathy,” which just feels inadequate after the strongest work. The vocals are an attempt at anger that does not quite match the steady rhythm of the song, leaving it unsatisfying and unimpressive. Similarly, “Mosaic” opens with a very solid guitar and drum combination that keeps building until an abruptly quiet verse. The track just barely misses the anthem quality it was going for. Both songs remain upbeat in the melodies, yet still lack the feeling of strength that Cartel is fully capable of producing.

Heavy guitar opens “Disconnect,” and firm lyrics sung with conviction put Collider back in motion with an energetic ninth track. The drumming is most prominent here by far, keeping the song fast-paced, while Pugh also manages to portray angry lyrics and vocals successfully. “Disconnect” is the frustrated fight song that “Sympathy” isn’t, and the final riff ending the song emphasizes the in-your-face attitude embodied in the lyrics.

“Collider” is not the title track one would expect from such a seasoned artist as Cartel. Though it has a coarser rock sound, the choppy verse and insubstantial chorus comes off as weak. There seems to be an attempt at expressing a doomsday feeling in the heavy rhythm and prominent bass; however, the track goes nowhere with the lyrics and melody. “Collider” makes for an interesting album title but lacks enough substance to stand as the title track.

Finally, “A Thousand Suns” closes Collider. The song has an ethereal feel to the beginning, with standalone vocals and soft strings opening the song before adding layers. “A Thousand Suns” branches out from the typical Cartel pop-rock style, but the band still manage to keep their familiar sound up front. The band brings it home when the chorus hits, capturing both a satisfying melody and harmony. Though the song sounds different from much of their previous work, it still ends with a distinctive hook that closes the album on a note of strength.

Despite the missteps, Cartel have managed to make an impact once again with Collider. Though it is not as satisfying an album as Cartel has the potential for, it shows that the band is still in the game and not going anywhere anytime soon.