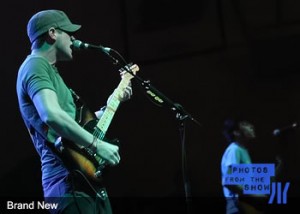 LONDON  — A lineup such as this is rarely seen in the United Kingdom. Brand New, Thrice and Glassjaw have never achieved mainstream success, but each has such a following that it only made sense that they would perform at the Wembley Arena.

The night started off with Thrice, which was missing its guitarist, Teppei Teranishi. Despite his absence, Thrice managed to hold its own. Playing songs from its latest album and favorites like “The Artist in the Ambulance,” the band showcased its ability to perform well no matter the constraints it faced. Dustin Kensrue’s voice was faultless throughout Thrice’s half-hour set, and fans concluded overall that the band provided a strong opening for the show.

A large percentage of the audience, however, was not familiar with Glassjaw’s music. Many stared in wonder as Daryl Palumbo, leapt across the stage screaming out lyrics. But the novelty of watching him seemed to wear off quickly, and once it did all that was left was a band that did not seem to work well in the arena. Perhaps Glassjaw’s brand of music is better suited to smaller venues, or maybe the audience was not used to a band that paid little attention to them. Nevertheless, the band focused on the music, and shirked from engaging with the crowd.

While many other bands might have used a venue such as the Wembley Arena to impress the audience with pyrotechnics, Brand New chose instead to let its music do the talking. The set was simple, and the band used only lighting and a projection screen for a handful of songs. Brand New itself was obviously the focus, and from the moment it arrived on stage, it had the crowd’s full attention.

The set started with the instrumental “Welcome to Bangkok.” The medley of guitars and drums, which was full of just as much emotion as any other song, slowly built into a crescendo before Brand New launched into “Sink”  — a song which Lacey sang, shrieked and crooned into the microphone, performing with passion he continued throughout the entire set.

Brand New played songs from all four of its albums, which not only kept fans happy, but also allowed those watching to see the way the band has evolved. After “Limousine,” the band launched into fan favorites like “Jude Law and a Semester Abroad,” surely cathartic for the pure pop punk fans who were screaming along to every word. The set list was crafted in such a way that these songs, though very different in sound, were able to flow into one another. And no matter the pace, every fan screamed and chanted right back. For the hour and a half Brand New was on the stage, the band had its audience in a trance until the final chords were played.

The show finished on a quiet note with only Lacey on the stage, and the rendition of “Play Crack the Sky” was so well-received that no encore was needed.