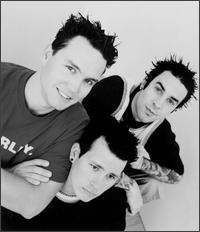 Blink-182 has pushed its European summer tour dates back to 2012 in order to finish recording its first album in eight years, the band announced today on its website.

“It is with heavy hearts that we have to announce our planned 2011 European summer tour has been rescheduled,” bandmates Mark Hoppus, Tom DeLonge and Travis Barker said in a statement. “When we booked the tour last year, we were confident that we would have the new album out before the summer. Turns out we were mistaken as the album is taking longer than we thought and won’t be out till later this year.”

Blink’s European jaunt will now begin on June 7, 2012, in Birmingham and run through July 12 in Liverpool. Planned 2011 festival gigs at Oxegen and T in the Park have been cancelled, while three additional dates in Ireland and Scotland have been added for next year.

Barker recently told Billboard.com that he and his bandmates, who reunited in 2009, were “a little more than halfway through” recording the new album. But, he admitted, it does not yet have a definitive sound “because it’s not finished. It does feel exactly where it should be, where we left off with the self-titled (album 2003). They feel like they could be disc two of that album, so far.”

In its statement, the band says it had hoped to have “some new songs to play” for the European tour, “rather than do another ‘greatest hits tour’ which you all saw last summer. The three of us are working very hard to do what we set out to do when we re-formed, get a new Blink-182 album recorded.”

The new Blink-182 album will be the band’s first since its self-titled 2003 release, which sold 2.2 million copies, according to Nieslen SoundScan.