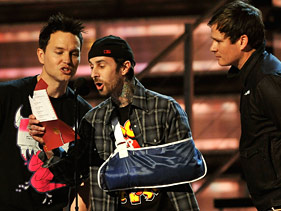 It’s official: With an introduction of “together again,” Blink-182 confirmed that they are back in the Blink business at the Grammy Awards Sunday night (February 8) when they appeared onstage together for the first time in four years.

Emerging to sounds of their 1999 hit “What’s My Age Again,” bassist Mark Hoppus, drummer Travis Barker – wearing a sling on his injured left arm – and estranged guitarist Tom DeLonge walked out together, with Hoppus joking, “Isn’t it great to see the Jonas Brothers and Stevie Wonder back together again?” after the unlikely pairing performed a medley of the Bros’ “Burning Up” and Wonder’s “Superstitious.” Barker added, “We used to play music together, and we decided we’re going to play music together again,” as DeLonge stood awkwardly to the side. Hoppus also yelled, “Blink-182 is back!”

“Hi. We’re Blink-182. This past week there’ve been a lot of questions about the current status of the band, and we wanted you to hear it straight from us. To put it simply, We’re back. We mean, really back. Picking up where we left off and then some. In the studio writing and recording a new album. Preparing to tour the world yet again. Friendships reformed. 17 years deep in our legacy. Summer 2009. Thanks and get ready,” a message from the band explained.

Hopes were high for the announcement when, on Thursday, it was revealed that the trio would be presenting an award at the Grammys. And they got even higher when Angels & Airwaves guitarist David Kennedy appeared to let slip in a Web chat that same day that Blink was going to record an album this year.