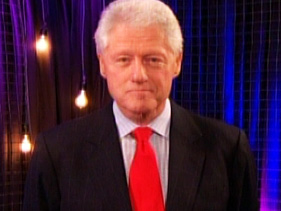 All throughout the “Hope for Haiti Now” telethon on Friday night, the millions of people watching at home heard stories about the current situation on the ground in Haiti. Perhaps no participant is more intimate with the plight of the island nation than former President Bill Clinton, who acts as the United Nations’ special envoy to Haiti.

During the show, he talked about his first visit there 35 years ago and how taken he was with the island’s people and culture. Even before the massive earthquake, there were perpetual concerns about the impoverished country’s infrastructure. They had only recently started to poke their heads out from under the destruction caused by a hurricane last year.

When MTV News caught up with Clinton backstage in New York, he laid out the sheer numbers involved in the outreach effort.

The struggle for survival is, of course, merely the first step for the recovering nation.

“It will take years to do it right,” Clinton said of the rebuilding process.

He talked about the long-term plan that the people of Haiti had developed before the earthquake, and said that the process of redevelopment can simply be folded into that plan.

“I’ve already been in touch with business people who will invest there, with non-governmental groups who promise to work there, with philanthropists who promise to give there. Every single person I talk to has reaffirmed their commitment to the long-term future of Haiti.”

The former president’s work in Haiti is only just beginning. In addition to Clinton’s work with the U.N., President Obama recruited him and former President George W. Bush to spearhead a fundraising push for Haitian recovery.

“If people are worried about where their money is going, they can send it to us,” he said. “We take no administrative fee, and we’ll put it right out to the people who need it.” Donations to that fund can be made to ClintonBushHaitiFund.org.

Clinton said that people should feel optimistic about the future of Haiti, provided that the support is great enough.

“These folks have the best chance they’ve had in my lifetime to escape their history and to build the kind of country that their children deserve. If we do this right, that’s exactly what will happen.”

Visit HopeForHaitiNow.org or call (877) 99-HAITI to make a donation now.