Being As An Ocean will hit in the road in March with support from A Lot Like Birds, My Iron Lung, Idlehands, and This Wild Life. The tour includes stop at South By South West and South By So What. Check out the dates below! 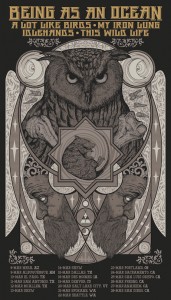 Tags: A Lot Like Birds, Being As An Ocean, Idlehands, My Iron Lung, This Wild Life