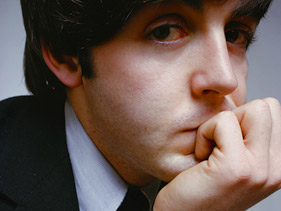 If, by chance, you happen to read something Thursday about Led Zeppelin reuniting or Jim Morrison coming out of hiding, don’t believe it.

As you’re probably aware, it’s April Fools’ Day, and these kinds of things have a way of happening. Why, on this very day last year, Kid Rock announced he had acquired the naming rights to the Detroit Tigers’ stadium, and Coldplay declared they were recording their next album in zero gravity.

Of course, none of it ended up being true, and both acts added their names to the ever-growing list of some of music’s greatest tricksters. It seems that bands have been at this kind of thing for decades now, so we figured that now was as good a time as any to shed light on some of music’s greatest hoaxes. From faked deaths to promised resurrections, alter egos to mysterious side projects, there was plenty to choose from. Musicians have as good a sense of humor as you or I. Here’s our list of the best hoaxes in music history:

Paul is Dead
Perhaps the greatest rock hoax of all time started in September 1969, around the time the Beatles released their seminal Abbey Road album. That’s when one particularly gullible fan published an article in a college newspaper speculating that not only had Paul McCartney died in a grisly 1966 automobile crash, but that the Beatles were covering the accident up, even going as far as hiring a Macca look-alike (named Billy Shears) to take his place. The hoax only picked up speed from there, thanks in no small part to the Beatles themselves, who, though they never admitted to it, seemed to delight in keeping the “Paul Is Dead” myth alive, peppering songs and album artwork with opaque references to McCartney’s crash and placing mysterious “messages” deep in songs. Of course, those messages could only be heard when said songs were played backward, only lending credence to the belief that it was the copious amounts of drugs being consumed in the ’60s that kept the rumor mill grinding.

The Masked Marauders
Really, this is a two-part hoax. The whole thing began in 1969, when Rolling Stone editor Greil Marcus penned a review of a fictional double-bootleg album, supposedly recorded by Bob Dylan, Mick Jagger, John Lennon and McCartney (who may or may not have been dead at the time). The goal of the piece was to poke fun at the recent trend of so-called “supergroups,” but the hoax began to take on a life of its own, and the magazine was inundated with so many letters that Marcus and reviewer Bruce Miroff decided to actually record the album, recruiting a Berkeley, California, skiffle band to play on it and tricking Warner Bros. into ponying up a $15,000 advance. The self-titled Marauders album – featuring covers and goofy originals like “Cow Pie” and “I Can’t Get No Nookie” – went on to sell more than 100,000 copies and ticked off just as many fans when the entire thing was revealed to be a giant joke.

Klaatu
In 1976, rumors began swirling that the Beatles had reunited and recorded a new album under the guise of “Klaatu” (the name of the protagonist in the 1951 sci-fi classic “The Day the Earth Stood Still”). Some rather overzealous journalists and disc jockeys were more than likely responsible for starting the whole thing, and Capitol Records – which released the album – didn’t exactly go out of their way to dispel the whispers either (since the album sold an additional 20,000 copies in a matter of weeks). In actuality, Klaatu were a prog-rock act from Canada who recorded until 1981 then reunited in 2005.

Lexicon of Grunge: Breaking the Code
The title of a sidebar in a 1992 New York Times article about the Seattle grunge scene, which claimed to offer the reader a guide to slang terms being used by rockers in the Pacific Northwest (“swingin’ on the flippity-flop,” “cob nobbler,” “lamestain,” etc.). In actuality, the list was a hoax, created by a Sub Pop sales representative named Megan Jasper, who, after being pestered by a Times reporter, made the jargon up on the spot. Oh, and hey, MTV News actually spoke to Jasper in 2008, though it was about the 20th anniversary of Sub Pop and not the Grunge Lexicon – which probably explains why she didn’t call  them lamestains.

Tupac Shakur is Still Alive
Less of a hoax than an urban myth, rumors that Shakur – who was gunned down in Las Vegas in September 1996 – still walks among us have quieted in recent years, though there are still those out there who believe. Most point to the volumes of music his estate has churned out since his death and clues in ‘Pac’s lyrics that seem to suggest that he faked his death and is currently hiding right beneath our noses (perhaps even partying hard on Bourbon Street). Oh, and then there’s Drake, who seems content to keep the rumors alive by dissing Tupac in song.

Humpty Hump
The epically schnozzed, ultra-libidinous alter ego of rapper Shock G, Hump ran roughshod over Digital Underground’s classic “The Humpty Dance” and basically eclipsed his creator’s entire existence. G didn’t seem to mind, though, playing up the angle that he and Humpty were actually two different people – he would often perform as himself, disappear, then re-emerge in Humpty’s trademark Groucho glasses. He even created a bio for the character, who fronted a fictional band called Smooth Eddie and the Humpers, was injured in a tragic deep-fryer accident and was forced to wear a fake nose to hide his scars. The guys in the Wu-Tang Clan have yet to show this level of commitment to their various aliases, by the way.

Jack and Meg White are Brother and Sister
While they were still kicking around in Detroit, White Stripes mastermind Jack White cooked up a backstory in which he and drummer Meg White were actually brother and sister. In reality, the two were actually ex-spouses, something that was revealed when the band broke and journalists uncovered their marriage certificate. White would eventually come clean about the hoax, saying that he created the sibling angle as a way to get fans to focus on the music.

Nine Inch Nails’ Strobelight
One of the most brilliant – and mean-spirited – hoaxes in recent years was perpetrated by Trent Reznor, who, on April Fools’ Day 2009, launched a site promoting Strobelight, an album he had supposedly recorded with Timbaland. The joke, of course, was that Timbaland had recently worked with former (now current) Soundgarden frontman Chris Cornell on his Scream album – an effort Reznor had previously slammed on Twitter by writing, “You know that feeling you get when somebody embarrasses themselves so badly YOU feel uncomfortable? Heard Chris Cornell’s record? Jesus” – and this was Rez’s way of poking fun at the entire project. Of course, song titles like “Everybody’s Doing It” (featuring Chris Martin, Jay-Z and Bono) and “P—ygrinder” (featuring Sheryl Crow) were pretty funny too.