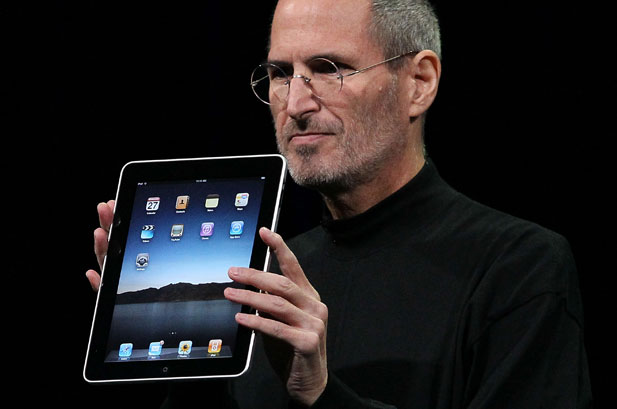 Apple Inc Chief Executive Steve Jobs took the wraps off the “iPad” tablet on Wednesday, looking to define a new category of wireless device that will play video, games and all sorts of other media.

Jobs, who returned to the helm last year after a much-scrutinized liver transplant, is hoping to sell consumers on the value of tablet computing after numerous technology companies had failed to do so in recent years.

Called the “iPad,” the device is Apple’s biggest product launch since the iPhone three years ago, and arguably rivals the smartphone as the most anticipated in Apple’s history.

The iPad has a near life-sized touch keyboard and supports Web browsing. It comes with a built-in calendar and address book, Jobs said.

As iPod sales wane, Apple is looking for another growth engine and hopes to find one in the tablet. But the move is not without risk. Consumers have never warmed to tablet computers, despite many previous attempts by other companies.

Technology enthusiasts had expected to see a sleek, full-color, 10-inch gadget with a touchscreen interface and wireless connectivity, designed for snacking on all sorts of media from videos to games to electronic books and newspapers.

Despite the buzz surrounding the launch and Apple’s storied golden touch on consumer electronics, the tablet is not necessarily an easy sell, analysts say.

Consumer appetite for a gadget that sits somewhere between a smartphone and a laptop has yet to be proven, though plenty of devices such as Amazon.com’s Kindle e-reader are vying for that market.

Apple had been mum, so the market had been rife with speculation about the device.

Analysts’ sales predictions for the tablet vary widely, with many believing Apple can sell 2 million to 5 million units in the first year.