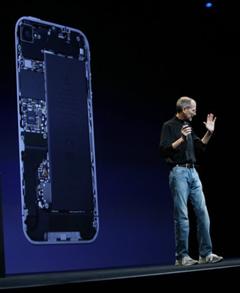 NEW YORK – Apple Inc. said Friday that it was “stunned” to find that its iPhones have for years been using a “totally wrong” formula to determine how many bars of signal strength they are getting.

Apple said that’s the reason behind widespread complaints from users that the latest model, iPhone 4, can show a sudden plunge in signal strength when they hold it in a way that covers a small black strip on one edge of the phone. Users have jokingly called this the “death grip” for the phone.

That drop seems exaggerated because the phone can wrongly display four or five bars of signal strength when it shouldn’t, Apple said.

“Their big drop in bars is because their high bars were never real in the first place,” the company said in a statement to users.

Yet the statement that the bar display is “totally wrong” is surprising, since there is no standard formula in the industry for translating signal strength to bars.

The company said it will fix the formula to one recommended by AT&T Inc. through a free software update within a few weeks for the most recent iPhone models, 3G, 3GS and 4. However, the “wrong” formula goes back as far as the original iPhone, launched in 2007.

AT&T, the iPhone’s exclusive carrier in the U.S., has borne much of the users’ blame for dropped calls and poor wireless performance. In saying that the phones have been showing too many bars, Apple is putting the spotlight on the network’s performance. AT&T declined comment Friday.

If the phones haven’t been giving a good indication of signal strength, users may have been missing clues that they should go to a location with a better signal to place a call, or that they’re holding the phone wrong.

Apple apologized to customers “for any anxiety we may have caused.”

“We are also making bars 1, 2 and 3 a bit taller so they will be easier to see,” the company said in the statement.

Apple launched the iPhone 4 on June 24 in the U.S. and four other countries, and users began complaining on Apple’s customer support website within hours.

Some outside engineers and users have blamed the iPhone 4’s apparent reception problems on the novel design that incorporates its antenna into the case. But the company said that any phone will show reduced reception if held in a way that covers the antenna, usually mounted at the rear and bottom of a phone. It maintains that iPhone 4’s wireless performance is better than previous models.

Spencer Webb, president of antenna design company AntennaSys Inc., found in cursory testing that switching to the “death grip” took an iPhone 4 from five bars to one. But that didn’t interrupt a call in progress.

Dropped calls are what really rile users, he said, not the bars. In the U.S., AT&T has embarked on a multibillion dollar program to upgrade its network capacity, particularly in New York and San Francisco, where the iPhone is extra popular.

“I don’t think they’re solving a problem, if there is one,” he said.

He said it was too early to conclude that the antenna design is faulty, given that the phone has been out only for a week.

At the same time, Apple could have defused the situation by including a simple card in the iPhone’s packaging, showing how best to hold it, Webb said.

Despite recurring complaints about dropped calls and slow data service, particularly in the U.S., the iPhone is a standout success, with each model selling faster than the previous one. Apple said it sold 1.7 million iPhone 4s in its first three days, essentially running out of stock.